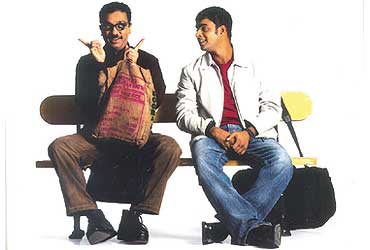 We saw 'Padmashree' Kamalahaasan earnestly turn saffron and reflecting on his personal identity as an Iyengar Brahmin in Hey! Ram. In Anbey Sivam, he flirts with red. Comrades Surjeet and Yechuri might be amused that someone in mainstream cinema is paying lip-service to them, but the result would certainly leave producers Lakshmi Movie Makers, veterans of straightforward masala entertainers, red-faced. Kamal says the film's use of street theatre was inspired by Safdar Hashmi and Sahmat. In an interview, he talked about how Charlie Chaplin's comedies always had a great sense of sadness and pathos woven in. Kamal thinks Anbey Sivam intelligently combines a tribute to Hashmi and Chaplin.

If Modern Times was a critique of industrial modernity, Anbey Sivam pretends to be critical of globalisation and MNCs (though Madhavan appears in a scene with his Pepsi loyalty intact). Lines that would figure in a CPI(M) pamphlet (or a Swadeshi Jagaran Manch's) are strewn all over the film. The film begins in a flooded Bhubaneshwar where Anbarasu (Madhavan), an ad filmmaker, and Nalla Sivam (Kamal) run into each other. Orissa is cut off from the rest of the country and Anbarasu needs to make it to Chennai in four days for his wedding. Instead, he is trapped with an idiosyncratic Sivam, with whom he is forced to share a room, rides on (not in) buses, and in trains, besides meandering conversations. There's good chemistry between Kamal and Madhavan, unintended perhaps. Like hero-heroine (in DDLJ) they run into each other as strangers, heroine can't stand the harassing hero, but eventually is attracted and falls for him. Anbarasu and Sivam even sing a duet as the Orissa flood becomes a cruelly picturesque prop for Kamal to philosophise on life, love, god, a/theism, fate. In the process, we learn through flashbacks about Kamal's past: when his face is not disfigured (it otherwise is), his limbs are in shape (they otherwise are not), and he is a street theatre activist, painter, plus organiser of workers against an oppressive capitalist (played by Nazar) whose daughter (Kiran) he falls in love with. Villainous father hates poor unionist, separates the two. Flashback dissolves into the present as a stone disturbs the still waters, literally.

Kamal has been abetted by Pralayan (left-leaning theatre person) and Madan (Tamil cartoonist-journalist) in the creative departments. Too many cooks and the broth froths. Kamal has inducted new friends into his charmed circle but the ideas (like communism) are cliched. If Rajnikant staked claim to divinity on a right-wing plank with Baba, Kamal does it with pretensions to rationalist-left rhetoric. The use and performance of original street theatre artists is the only thing commendable in the film.