Anatomy Of A Cover-Up 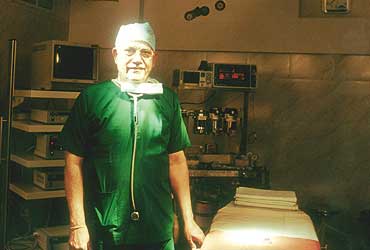 outlookindia.com
-0001-11-30T00:00:00+0553
Dr Prathap C. Reddy, executive chairman and the man behind the Apollo Group of hospitals, should be a troubled man. Ever since the heroin case involving Rahul Mahajan and Vivek Moitra stirred up a controversy, Delhi's Indraprastha Apollo Hospital has been in the news for all the wrong reasons. The police have filed a case alleging the hospital had "fudged" the reports in the case. Vivek and Rahul had both consumed heroin and the former died in Apollo of the drug overdose. The latter, though, was shielded by the hospital which claimed tests showed he hadn't consumed any drug. This lie was later nailed by forensic tests.

Now a police probe is on and doctors and staff at the hospital have been questioned. Controversy, though, is nothing new to the 74-year-old Reddy, who is himself a cardiologist. He's a pastmaster at handling them but this time around he may not escape unscathed. The Mahajan-Moitra case is showing all signs of dragging on. The police have already questioned Reddy's close aide Raji Chandru, who handles his Delhi office, and are waiting to interrogate him.

Unlike other medico-legal cases, this one also has a political twist. Rahul is the son of slain BJP leader Pramod Mahajan and Vivek Moitra was the latter's secretary. The police have phone records that show Chandru was in constant touch with Harish Sharma, another of Pramod Mahajan's trusted men, on June 2 after Rahul and Moitra were admitted. She was also in touch with Dr Reddy at the same time through sms.

Though Reddy has denied this, mobile phone records tell a different story. An officer investigating the case quipped, "We would have liked to question Dr Reddy much earlier but his staff keeps telling us that he's travelling. His hospital has been used to shield several people, including politicians, from the police, so they can probably keep him away for some more time."

The questions the police have raised are: why did the hospital go out its way to shield Rahul Mahajan? Why did Reddy take a personal interest in the case? What were his links to the Mahajan family that he was willing to stake the reputation of one of the biggest and most prestigious hospitals of the group?

That Reddy is politically connected is well-known. Outlook's investigations reveal that for more than a decade he was close to controversial godman Chandraswami and even a trustee of his Vishwa Dharmayatan Trust. He remained on the trust till 1995. But when the law caught up with the godman, Reddy opted out. But not before making some powerful contacts in Delhi.

Incidentally, Reddy was a co-accused with Chandraswami in a Foreign Contributions Regulatory Act (FCRA) violation case. The two were accused of siphoning off foreign donations received by the trust. The Delhi court in '97 once even ordered Reddy to surrender his passport and not to leave the country without the court's permission. The case, incidentally, is still on.

Before the healthcare industry happened, Reddy was a cardiologist in the US. Born in Aragonda village in Chittoor district, AP, he studied medicine in Chennai. Soon after, he left for the US and did a fellowship at the Massachusetts General Hospital, Boston. After acquiring US citizenship in the '60s, Reddy often wrote to his father, telling him about his progress, the luxuries he'd acquired. His father apparently wrote back, "All that's fine, but how do people here know if you are a fine doctor or not?''

Eventually, Reddy came back to India and opened a small cardiology clinic in Chennai in 1975. Eight years later, he set up the first of the Apollo hospitals in Chennai. In 1987, he opened shop in Hyderabad. The group now has nine hospitals and manages another 11 in partnership. A family-run group, Apollo's turnover is now Rs 1,500 crore.

But despite world-class medical facilities, controversy has dogged the group. Rahul Mahajan is not the first well-connected person admitted here who managed to evade the police. Controversial Siwan MP Syed Shahabuddin got himself admitted to the hospital when arrest warrants were out for him. As did Kishen Kumar, the brother of the late T-Series boss, Gulshan Kumar, when the police wanted him in a match-fixing case. A well-connected rape accused from Ahmedabad, Sejal Shah, came all the way to Delhi to escape arrest and got admitted to Apollo Millennium hospital, managed by the group. 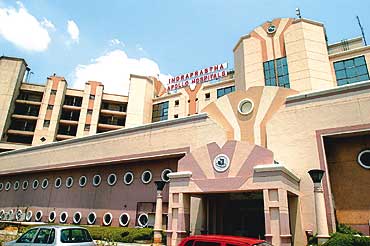 There are also several instances of botched treatment by Apollo. The late Union power minister R. Kumaramangalam died in 2000 after prolonged treatment in AIIMS and Apollo. The likely causes cited ranged from leukaemia to septicemia. A subsequent inquiry revealed that Apollo had not carried out necessary investigations. In 2003, DMK chief M. Karunanidhi accused Apollo Chennai of messing up the treatment of his nephew and then Union minister Murasoli Maran. Incidentally, the first major case of a treatment gone wrong was in Apollo Chennai in the '80s. International table tennis player V. Chandrashekhar, admitted for a minor knee operation, was left paralysed after surgery.

In the past two decades, Reddy has acquired the reputation of being close to the rich and powerful in the national capital. His links with a former Delhi lieutenant governor helped him with his city operations. The state government not only allotted 15 acres of land to Apollo but also spent Rs 17 crore of public money constructing the hospital.

Since the government had invested funds, the agreement was that of the 600 beds, one-third would be for poor patients who would be given free treatment. However, as several committees who have examined the hospital's functioning point out, Apollo earns on an average Rs 90 lakh a year from poor patients. The hospital's defence: it does not charge for the bed or the doctors, but only for investigations done at the hospital. Many in the medical profession cannot reconcile with this as a credible explanation.

Dr Reddy often says that the bricks in the Chennai hospital equal the number of difficulties he faced in setting it up. The way things are going he may say the same about his 'prestigious' hospital in the capital.