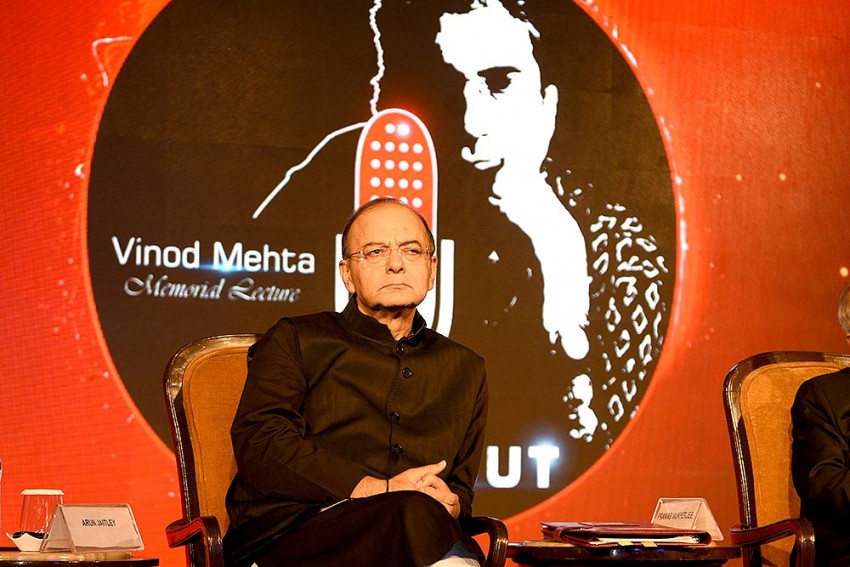 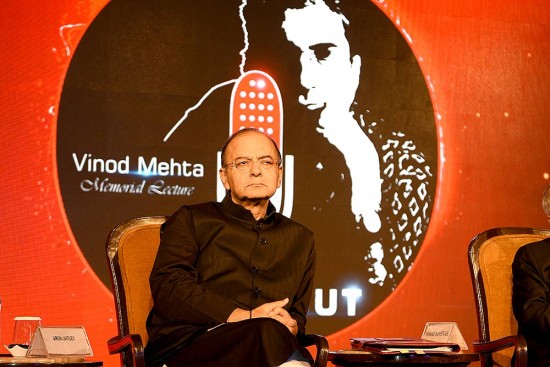 In his Parliament chamber, finance minister Arun Jaitley, a high-profile member of the Narendra Modi cabinet, often gets candid with visiting reporters. He fills them in with political insights over tea served by liveried waiters. The 64-year-old Jaitley, as any correspondent who has been part of these discussions will confirm, is an unsung public intellectual. He sounds less a partisan politician and more a public-minded thinker. At the Outlook SpeakOut Awards, the Bharatiya Janata Party (BJP) leader spoke on a variety of things—from India’s unflappable parliamentary democracy to the future of print journalism—with his usual analytical take.

A Rajya Sabha member,  Jaitley, who received the Best Parliamentarian Award from former president Pranab Mukher­jee with some self-deprecatory humour. “I ass­ume you also nee­ded someone from (the field of) politics,” he said, commenting on his nomination alongside several awardees from different walks of life. Seated to his right were two politicians from across the aisle: Mukherjee and Orissa chief minister Naveen Patnaik.

Never mind the noise, India’s parliamentary democracy—shrill and often disruptive—is still the best suited for the country and its people.

Never mind the noise, but India’s raucous parliamentary democracy—shrill, uproarious and disruptive—is still best suited for the country and its people, Jaitley said. On his very “first or second day” as a Parliament member, Jaitley recalled making a way too aggressive speech. As a 1970s Delhi University student who graduated in commerce in 1973 and passed LLB four years later, he got his first lesson in parliamentary conduct when party veteran L.K. Advani gave him a talking. “I was asked to speak and I was a little aggressive. Concentrate on issues not on persons, Advaniji told me,” Jaitley said.

There was time when Parliament had very serious debates. Now, of course, there’s more of the “usual noise”. “Parliament still is one of the greatest institutions that remains suited to India. People with different cultures, with very different int­erests gather in its two Houses, where every voice is heard. It has served Indian democracy well.”

When Mukherjee’s term as President was coming to an end this July, Jaitley wrote an article on him, profiling him as a parliamentarian. “His is a telling career…I was a beginner and became minister when he was in the Opposition. But when he spoke and made arguments, he didn’t wear the political party cap. He was more of an amicus curiae speaker…speaking for the whole House,” he said. “This gives you acceptance.” Mukherjee listened attentively.

Jaitley joined the BJP on January 10, 1980, having been a leader of the Akhil Bharatiya Vidyarthi Parishad. During the Emergency, when civil liberties were suspended, Jaitley was imprisoned for 19 months in Tihar Jail. Jail “unravelled the different facets of life before me as I interacted with people coming from diverse back grounds”, recalled Jaitley, a who has been practising law since 1977. “It gave me a certain INS­ight into the working of the human mind, which would stand me in good stead in my later life.”

One of the early public offices he held was that of the Additional Solicitor General of India in 1990. He was entrusted the Bofors case. In 1998, he was also member of the Indian delegation to the UN General Assembly where the declaration on laws relating to drugs and money laundering was adopted.

Jaitley said all parties, while in Oppo­si­tion, do engage in disruption of Parl­ia­ment. “We take it as the last resort.” But it’s always through “debates, discussions and adjournments and meetings” that Parliament gets meaningful debate.

“Television channels,” he noted, “stop regular news programming to focus on live debates. This is a tribute to the quality of debate, there is no other system that brings out differences and then conciliation. In the last few months you had so many deb­a­tes, especially on the Goods and Services Tax. Eventually after the acrimony and despite its song and dance, there is consensus.”

The journalism of the kind Outlook does is most difficult. India is one of the very few countries where magazines are still alive.

Post the economic liberalisation of 1991 (the year from which Jaitley, incidentally, has been member of the BJP nat­ional exe­cutive), he could not remember a single instance of any reform being held up. It is debated for sure, but it normally gets passed with consensus. So, are we better off with an orderly Parliament that is tame, disciplined and way too listless? “I don’t see the noise going, but at the end there is consensus taking us forward.”

Jaitley also turned his thoughts to the media. Magazine journalism, of the kind we do at Outlook, “is most difficult”. Thanks to technology, the definition of news has changed, he said. “News is what the camera is able to capture. Even in newspapers, one can’t read what one has already seen. India is one of the few countries where magazines are still alive. It is a tribute to journalists who work there.”

The Art Of Speaking