Netaji evokes awe among Japanese soldiers who saw the war in Burma with him. It's a fast dying cult around a borrowed God. 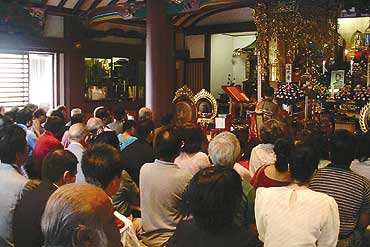 Enter the Renkoji Temple and you find a tiny urn that holds a huge controversy. Two commissions from India have examined the ashes it contains to determine whether or not they are the last remains of Bose. A third commission is on its way. But while India discusses, ad nauseam, whether Bose is still alive or not, these Japanese patriots struggle to keep his memories alive.

More than five decades back it was quite another story. Bose is generally believed to have first arrived in Tokyo in May 1943, after a German submarine carrying him made a daring rendezvous with its Japanese counterpart, 400 miles southwest of Madagascar. In what is reported to be the only submarine-to-submarine transfer of passengers in World War II, Netaji was transferred to the Japanese submarine and brought to Japan. By then, the Indian National Army (and also the Indian Independence League which the other revolutionary, Rash Behari Bose, had earlier formed), was faltering, outlining the need for Netaji's leadership. At a public meeting in Singapore later that year, Rash Behari formally handed over the leadership of the iil and the ina to Bose.