An Unkind Cut In The Cane

The trickle of cash to farm, mandi, mill and consumer churns a flood of grievances in Maharashtra’s sugar belt 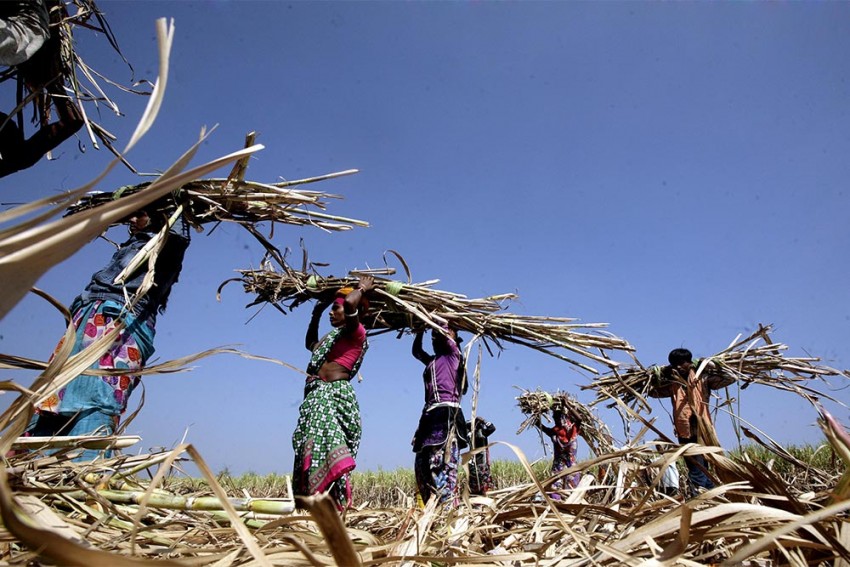 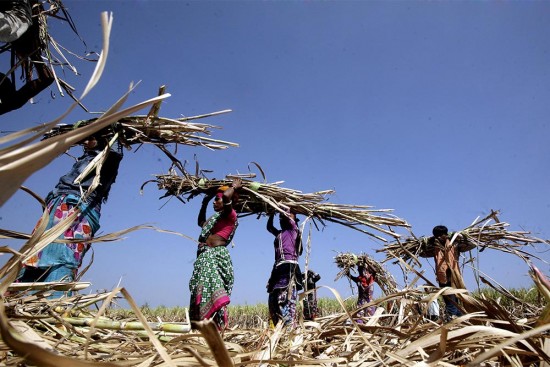 Twenty-odd people, who have come from Limtok, near Hingoli in Maharashtra, to work as sugarcane-cutting labourers, are busy loading the tractor that would carry tonnes of sugarcane to the nearby sugar mill at Jaysingpur, in Kolhapur district. It is hot, the sun is in the eyes and the brown drying field jabs at the naked feet. Wrapping up for the day, they sit in the shade of fence shrubs for a few minutes before heading to the next field. During one such break earlier in the day, Pranita and her mother tried to buy a plastic pot for Rs 100 from a vendor on a bicycle. Their contractor had parted with a precious Rs 2,000 note so the lab­ourers could buy essentials. However, the vendor said he didn’t have change and left. There is no market nearby and, in any case, the debt-ridden workers are not allowed to take long breaks.

In and around the sugar belt, cane cutting, crushing and related activities have gathered momentum as November-­December is the peak season. Sugarcane production has been lower than normal this year and farmers were expecting a good rate to compensate for the fall in ­output. However, post demonetisation, the entire chain of stakeholders is ­sha­ken for various reasons.

“We take money for the season in adv­ance and usually end up finishing most of it even before we come here,” says Pranita, who was pulled out of school after class nine to pay for the loan taken for her elder sister’s marriage. “Once we are here, we sell the sugarcane waste as cattle fodder to sustain ourselves. If we don’t complete sugarcane-cutting as per the contract, we carry the debt into the next season.” She is here with her parents. Now she has to work until she pays back the previous loans and manages to get a fresh one for her wedding.

Usually, they are paid Rs 50,000 per couple for the season that lasts around four months. The ones who bring their own bullocks to transport the cane are paid Rs 1 lakh. Even as the women gather to share their experiences, the frowning vehicle owner tries to hurry them up. “Sometimes, we can’t even buy tea,” says Ramesh, another worker. “Even our contractors are struggling. One told us they will be fined by the banks if they go to get cash exchanged for us.”

At Sanjay Chaughule’s farm, too, the scene is no different. The workers are from arid Beed, one of the poorest districts in Maharashtra and the stronghold of late Union rural development and panchay­ati raj minister Gopinath Munde’s fam­ily. Rohini and Krishna Dhanve travelled overnight in a tempo that brought them here along with their pair of bulls. Here for the first time, she says, “We have no choice but to depend on the contractor for the smallest of requirements.”

There are an estimated 1.5 lakh-plus migrant workers in the sugar belt in a season, employed in over 100 sugar mills. This season, the contractors ­(locally called mukadams) and the farmers, who mostly own one to five acres, are unable to pay their workers because most of their money is stuck in their accounts with cash-strapped cooperative banks.

Every monetary ­transaction in the sugar belt is closely linked to the DCCBs... Most of them have received little or no money to disburse.

“We hope things improve soon,” says Chaughule. “Wages arean issue, but we are coping with it.” What you hear about demonetisation depends on who you speak with. Talk to a farmer trying to sow a rabi crop, who needs to make multiple payments, and you hear that dem­onetisation is synonymous with high stress. But if it is someone in the middle of cane-cutting, who does not intend to go in for an int­ermediate crop, it comes across as not that bad—barring, of course, pending payments through District Central Coo­perative Banks (DCCBs).

“I planted sugarcane in the first week of November and had set aside Rs 15,000-20,000 for fertilisers, pesticides, workers’ wages and other expenses,” says Dilip Mangawe, who is worried about his freshly planted sugarcane on 1.5 acres of land near Hasur village in Kolhapur district. “After November 8, I deposited my money in the cooperative bank. But they are able to give us only Rs 2,000 in a week, that too if you are lucky. How long can we run on credit?”

Rabi farmers who want to plant chick peas are holding on to see if money will be released in the near future. The government has allowed seed and fertiliser to be procured on credit, but most farmers are unsure about the day-long trips to persuade the authorities.

If, however, you are a vegetable grower, life is tougher. The anxiety is palpable at the Shahu Market Yard, Kolhapur, where wholesale deals are struck early, at 6.30-7 am. Truckloads of vegetables such as tom­atoes, cauliflower, cabbage, brinjals, leafy vegetables and green peas are up for sale. The commission agents are busy keeping a record of unpaid bills—from the traders to the farmers via their agencies. Except for a few buyers, who are able to pay by cheques and perhaps benefit from the falling prices, everyone is worried. 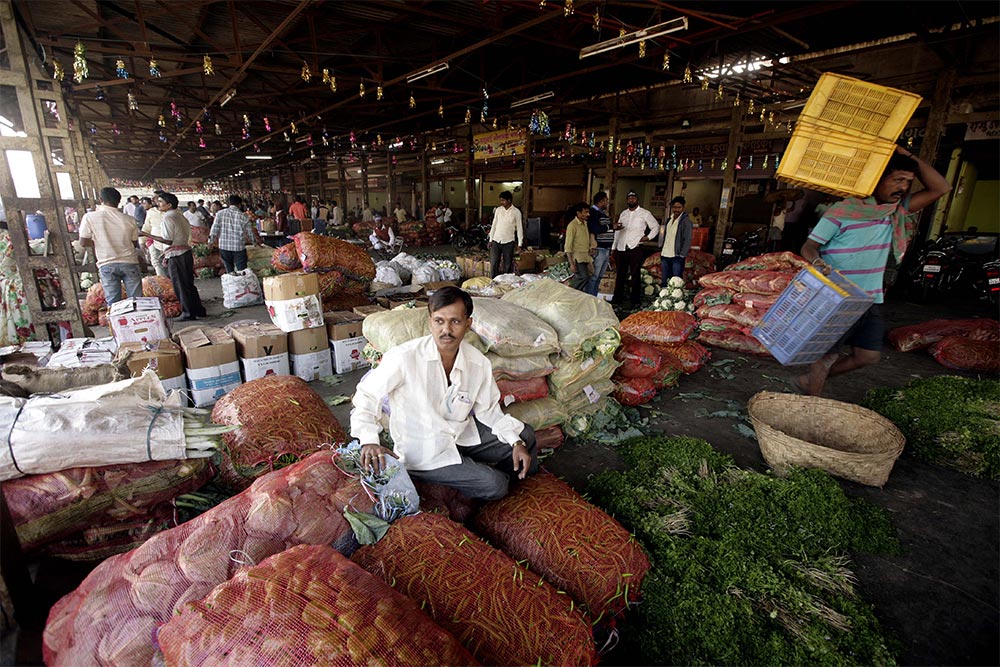 It is slump time at the Kolhapur vegetable market

“The end-customers are buying less, so retail is also down,” says Vishwasrao Patil, a prominent agent. “We are selling almost at half the price. Tomatoes are ­being sold at Rs 2 per kilo as we can’t hold them hoping for better prices, forget about taking them back. Farmers are the worst hit and are barely able to reco­ver the transport costs.” A manager at the Bashirbhai Bagwan Commission Agent’s office says, “We are trying to settle as many bills as possible and pay those who are in dire need of money. We also accept old notes from traders sometimes.”

A farmer has brought cauliflowers from the Karnataka border hoping for better rates, but will have to settle for less. Ano­ther farmer, who has five gunny bags full of cabbages, says he is confused about the cashless chain. “I am a small farmer with 10 cents of land and cannot hire an entire vehicle for five bags of produce,” he says. “Who do I pay in cheques and cards? I have to pay to the vehicle owner and a few ­labourers every week, and we are incurring losses by the day. Increased output had already caused the prices to fall. The cash crunch only adds to the misery.”

Although most stakeholders in this chain are people who have known each other for years and are willing to help each other out, pending credit cycles are wearing everyone down. The sugar belt spread over parts of Pune, Satara, Sangli and Kolhapur districts is one of the better-­off regions and most farmers have dairy cooperative groups as an additio­nal source of income. But every monetary transaction—bills from sugarcane mills, crop loans, personal loans, government schemes, credit societies and so on—is closely linked to the DCCBs. After these banks were prevented from accepting money on suspicion of large back-dated entries, most of them have received little or no money to disburse.

At the Sangli district headquarters, DCCB manager Mansing Patil is busy trying to convince people to start taking debit cards, use RTGS modes and so on, but he is unsure these would work. “As of now, we have 16 lakh account holders spread over 217 branches in the district covering 734 villages,” he says. “The demand stands at Rs 500 crore and we have received only Rs 43.65 crore since November 8. We have not paid salaries. We will lose business and soon the account holders will mig­rate to private banks because they have the money supply. We followed RBI’s guidelines and NABARD can check what we do. A large number of our account holders have no access to other banks. They are being patient, but for how long? Our staff has been attacked in a couple of villages, and we have shut down some of our branches for now.”

What happens at these branches is an experience in itself. For the past three weeks, banking hours at the Hasur branch of the Kolhapur DCCB have bec­ome cycles of firefighting and chitchat sessions. Sunil Birmale has come for the fourth time to claim his dairy society bill. “We get paid once in 10 days and I have been turned away thrice already in the past month,” he says. “We have to deposit milk as and when we collect it because it is a perishable commodity.”

There is a pile of passbooks pending from last week. Each passbook is ret­urned with a Rs 2,000 note, but when their “number” will come, no one can tell. One man, who needs to fill up stock for PDS, says the state department that looks at storage and distribution does not accept cheques for procurement. The staff, mostly locals and associated with agriculture, are also at a loss. Godabai, a farm labourer, has been coming again and again over the past week because she needs Rs 10,000 from her savings for her daughter’s delivery, but has managed to take out only Rs 6,000 so far.

Negonda Patil, who works as a contractor, says he is frustrated with trips to the bank and the fields to pacify the workers. “They look up to me for their needs and I have nothing to give. How many times can I tell a shopkeeper to supply on credit?” he says. Riyaz, a bank employee, asks, “Do they want to finish cooperative banking instead of catching the culprits, if any?” Farmers ask if it was necessary to choke the DCCBs to stop underhand dealings.

The MoS for agriculture and marketing, Sadabhau Khot, is from the Swabhimani Shetkari Sanghatana and was at the forefront of an agitation a few years ago when farmers had refused to supply sugarcane until the FRP (fair and remunerative price) was raised. As minister, he says farmers are doing okay. “I will call you later to discuss in detail,” he tells Outlook twice.

Meanwhile, a delegation led by CM Dev­endra Fadnavis met Union finance minister Arun Jaitley about the DCCB crisis. A press statement from the CM’s office says Jaitley responded positively and discussions to resolve the issues with NABARD and the RBI have begun. On the ground, activists are saying that rural poverty will only rise in the coming days as the poor do not have the capacity to absorb the losses caused by demonetisation.

The winter chill has set in with temperatures dipping to 10-12 degrees. On the way back from the sugar belt, the warm glow of fires that are readying the fields for the next season is spotted every now and then. Whether the fire brings warmth or scorches the lives of the poor is now in the hands of policymakers and the implementing authorities. Meanwhile, the only hope for Godabai’s daughter to be delivered safely lies in the kindness of doctors.

A snapshot of happenings at the Sangli DCCB

The Tail Rotor Is Up