An Undercurrent Of Goodwill 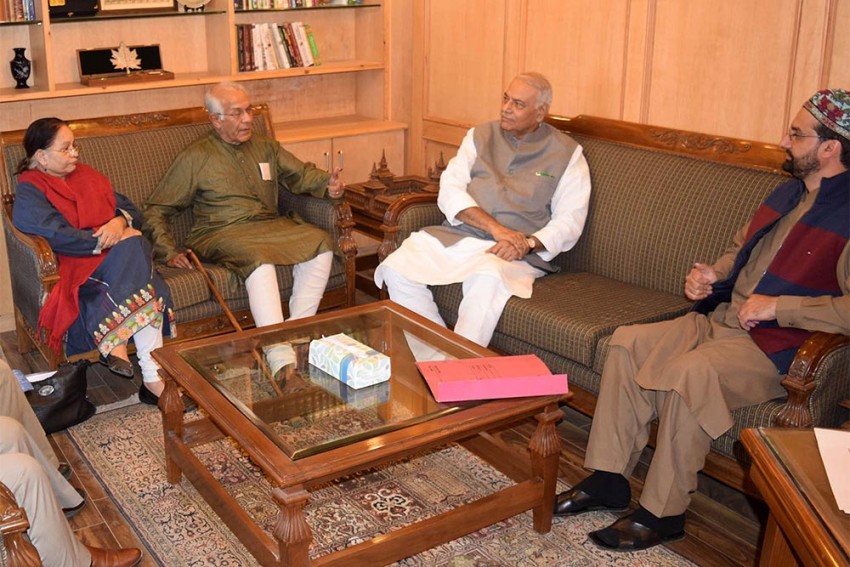 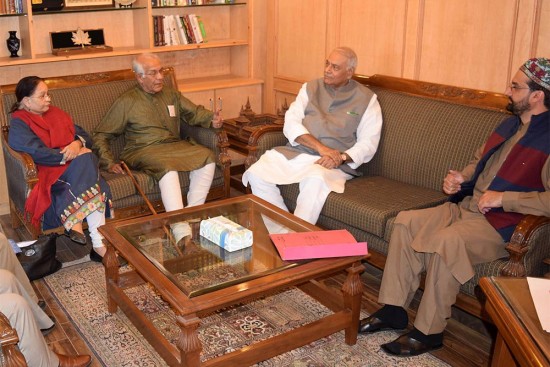 Recently, Yashwant Sinha gently tided over a spot that would have been tricky for any senior BJP leader. That was when some elderly citizens complained to the former union minister that one of his responsible party colleagues was draining away a certain positivity in Sinha’s efforts to restore peace in Kashmir. The civil society group’s members were referring to BJP general secretary Ram Madhav’s snide remark that the Hurriyat Conference meant terrorists—not tourists—when the multi-­party conglomerate invited people to visit the Valley. Sinha gave out a laugh, and said, “I think you expect too much from somebody like Madhav to hear a different kind of statement.”

Sinha knows well the history of exercises that have preceded his teams and their attempts to establish normalcy in the border state upcountry. A bureaucrat-turned-politician who served as a key minister in three union governments, he is treading cautiously on the Kashmir mission. It is another matter his five-member team does not have an official standing. The rounds of negotiation it continues to hold with separatists of various hues in Kashmir are self-initiated, sans a direct bearing on the Narendra Modi government’s line.

Hurriyat leader Mirwaiz Farooq says separatists are for dialogue. The earlier all-party delegation was “not properly handled” by the government, he claims.

Madhav, who is the BJP’s key interlocutor for Jammu and Kashmir, suitably amplifies this point. “We have no position on Sinha’s Kashmir visits,” he told Outlook. He acknowledges the 79-year-old’s stature in the BJP, but says Sinha should have first checked with the party before taking such an initiative. Without tending to sound condemning Sinha’s Kashmir forays, Madhav adds that any individual in India has the right to travel anywhere within its boundaries. “Why should the party object,” shrugs the former member of the RSS nat­ional executive.

Sinha, in his various meetings, has told Kashmiris to come up with “concrete suggestions” that can take the dialogue further to hopefully arrive at a broad consensus amid the Hurriyat’s clamour for independence. His approach has fetched him increasing credibility among the Valley’s civil society groups even as his party, ruling the Centre, is maintaining a studied silence about the delegation’s activities.

The delegates talked to veteran Farooq Abdullah of the main Opposition Nati­onal Conference, besides Congress lea­der Saifuddin Soz, a former union minister. The team could not visit chief minister Mehbooba Mufti, but did hold telephonic talks with her. “I think our suggestion are being taken seriously by various players,” says Barve, who is well known in the civil society circles of Kashmir, where she often holds conferences about cross-LoC, intra-religious and India-Pakistan track II diplomacy.

The five members eventually readied a report. Submitted to the union government, suggesting an immediate ban on pellet gun as a crowd-control weapon. “This will have a salutary impact on the Kashmiris. This is not something that should be left to committees or to the security forces,” it says. The Modi government had, in September, said that a panel was being formed to look for an alternative for pellets. But the J&K police continue with the “non-lethal weapon”—the latest instances being against protesters in the streets following the July 8 killing of young militant Burhan Wani by security forces. 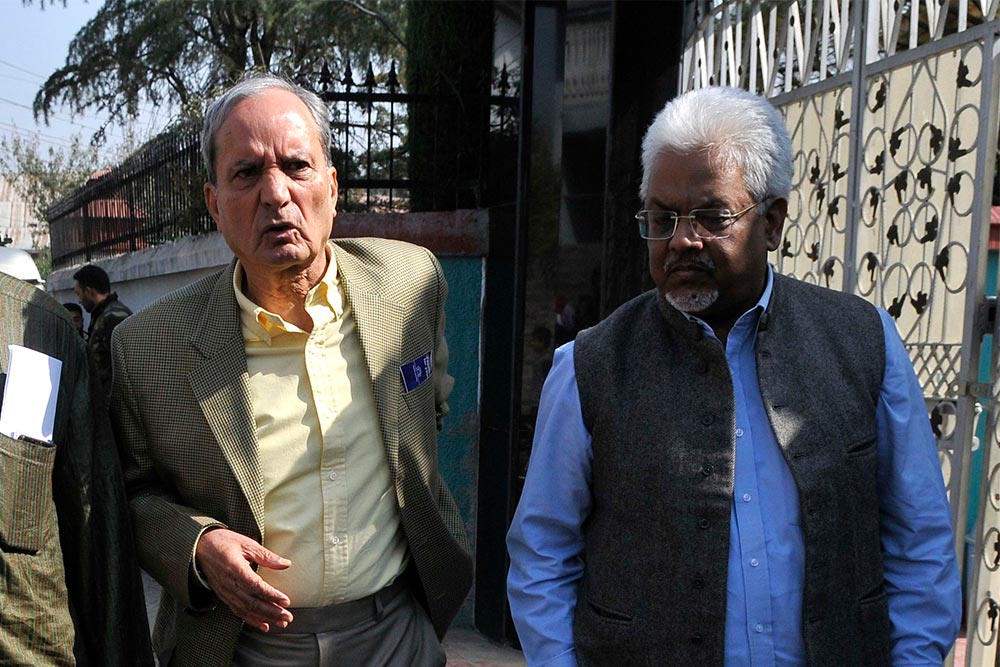 On October 25, when Sinha and his delegation first walked towards the residence of Geelani, who is under house arrest, police personnel outside the separatist’s home in uptown Hyderpora stepped aside. The 87-year-old’s aides opened the doors for the visitors.

What followed inside Geelani’s residence was an hour-long discussion with the leader, who is known for his hard-line stance on Kashmir and believes that the UN resolution is the only way to resolve the long-standing issue. It was an extraordinary development in the Valley, post Wani. The funeral of the 21-year-old Hizbul Mujahideen commander was attended by 2.5 lakh people, baffling the state government and the intelligence agencies. The subsequent turbulence killed around 90 protesters and wounded more than 10,000 people—chiefly owing to pellets and bullets fired by the government forces.

It was amid the peaking of that unrest Union home minister Rajnath Singh visited Kashmir. Not once, but three times. He expressed the Modi government’s willingness to talk to all stakeholders. Yet, there was no official move to hold dialogues with the separatists.

That is what makes Sinha’s engagement with the Valley significant. Only on September 4, at the height of agitation in Kashmir, Geelani and other separatist leaders refused to talk to five members of an all-party delegation Rajnath led to Kashmir. The separatist closed the gate on the team comprising CPI(M) general secretary Sitaram Yechury, the CPI’s D. Raja, JD(U) leader Sharad Yadav and the RJD’s Jay Prakash Narayan Yadav. Slogans of “Go India Go Back” rent outside Geelani’s residence. Two other separatist leaders, Mirwaiz Umar Farooq and Moh­ammad Yasin Malik, who were lodged in two different jails, exchanged pleasantries with the delegation members, but refused to hold any talks.

This enraged the ruling Peoples Democratic Party. “We extended an invit­ation to the Hurriyat Conference for talks. Our chief minister sent a letter to the separatists herself, that too a day ahead of the all-party delegation’s visit,” points out PDP leader Waheed-ur-Rehman Parra. “Yet, when the parliamentary delegation went to meet them, they slammed the doors on them. And now they are talking to an unofficial team.”

However, those who met Team Sinha say the BJP leader has opened a communication process between Kashmir and New Delhi. “His visit has unblocked the talk channels since the (post-Wani) protests. It also helped Kashmiris convey that they are not against talks, but the dia­logue has to be meaningful,” says political commentator Gowhar Geelani. “The Sinha delegation actually helped Kashmiris to counter New Delhi’s propaganda that Kashmiris are anti-dialogue.”

Human rights activist Khurram Parvez, too, met Sinha’s team, having been released following a November High Court order after three months of detention under the Public Safety Act. “We perceive them as independent, concerned citizens of India who want to facilitate dialogue,” Parvez told Outlook. “I was brutally frank with them. I told the team that there is a huge trust deficit regarding such delegations in Kashmir, given the past betrayals. Only that we don’t have much choice but to engage with such delegations. I told them: ‘We will still talk to you, as talking is better than getting persecuted and killed’.”

Mirwaiz, who is chairman of the Awami Action Committee faction of the Hurriyat and has been put under house arrest after his release from the jail, told Outlook that the Sinha delegation made it clear from the beginning that they had no official sanction or government support. “They came with an open mind unlike the all-party delegation. The minister’s team laid conditions for a dialogue,” he notes. “I was in jail when some members came to meet us. It was bizarre. If you want to have a dialogue, you should know how to handle the process.”

According to Mirwaiz, the parliamentary delegation was not properly handled by the government at the Centre. “First, the minister said ‘no’ to talks with the Hurriyat; later he disowned those members who came to meet us. This was their approach,” he says. With Sinha, Mirwaiz, 43, hints at a long-term dialogue process: “I have absolutely no issue in engaging with Sinha and others, as they support our move to educate Indian people what the Indian state is doing in Kashmir.”

Mirwaiz  goes on to push the envelope further. He says the Sinha delegation has accepted that Kashmir is an issue that needs resolution. “And the Hurriyat Conference and resistance leaders are only stakeholders with whom talks can be held for resolution of Kashmir,” he adds.

Unlike Mirwaiz, Yasin, who heads the Jammu Kashmir Liberation Front, did not meet Team Sinha. On their second visit, the delegation didn’t approach the 50-year-old separatist for a meeting. Yasin has not given a reason for not meeting Sinha despite his long engagements with Indian civil society groups. Yasin isn’t opposed to talks, as he is one of the three separatist leaders (along with Geelani and Mirwaiz) who has been leading agitations in Kashmir, issuing protest calendars since July.

Barve says Team Sinha, before visiting Kashmir, was in touch with various separatist leaders and civil society groups. She insists that the five members are not exa­ctly a delegation. “We are a group of concerned citizens. We are pained to see what is happening in Kashmir. We have nothing to do with the government,” she says. “That is why we were talking to different leaders—even on phone. They include those who didn’t meet us on our first visit ahead of our Kashmir effort.”

The five members, Barve says, did “a great deal of groundwork” before their first visit to the Valley for peace negotiations. “Our efforts have opened all channels of communication that were earlier closed between New Delhi and Kashmir,” says the executive director of the Centre for Dialogues and Reconciliation (CDR). “We have made a report public in which we have even said Geelani is for unconditional talks. He has not disclaimed it so far. From his position of ‘no dialogue’ to ‘unconditional dialogue’, I think it is great progress. The onus to keep the talks happening lies on the government of India now.”

The 67-year-old expert says the report by the “concerned citizens” reflects a “sense of urgency” they saw in Kashmir. “In districts and towns, we were told during our interactions that the present calm is no calm. People have apprehensions of the unrest again.”

Six years ago, the Manmohan Singh government had appointed a three-member team of Kashmir interlocutors. Journalist Dilip Padgonkar, educationist M.M. Ansari and feminist-academic Radha Kumar visited the Valley in October 2010, but the separatists didn’t meet them, dismissing the panel as a “joke”. Today, in the thick of Team Sinha’s peace efforts and after the five-month-long unrest amid three visits to the Valley by parliamentarians, the separatists were expecting that New Delhi will appoint top politicians—not journalists and academicians—as interlocutors.

After all, Sinha’s team members have deep Kashmir connections. Habibullah has served in Kashmir during the turbulent 1990s as an IAS officer. Twice, he remained a divisional commissioner of Kashmir region. In 2004, Habib­ullah created furore when, as a fellow of the United States Institute of Peace, he arg­ued that the United States could play a crucial role as a facilitator in Kashmir as a majority in the Valley regarded Washington as an honest broker. Today, he is a regular in India-Pakistan track II initiatives. Also, Habibullah calls Yasin ‘beta’ (son), according to former RAW chief A.S. Dulat in his book The Vajpayee Years. Bhushan, a former editor of Hindustan Times and Mail Today, is a expert on international affairs and an old Kashmir hand.

Barve’s CDR, last year, hosted a Delhi conference in collaboration with Islamabad-based Jinnah Institute. Held for the sixth consecutive year, its aim is “to promote peace between India and Pakistan through Track II diplomacy.” Kak, too, is a regular in that channel of communication bet­ween the two neighbours—and frequently att­ends intra-regional conclaves the CDR organises in the Valley and outside.

A report by the Kashmir interlocutors of 2010 had recommended the setting up of a constitutional committee (CC) to review all the central Acts that have been extended to Jammu and Kashmir since a 1952 Delhi agreement. It is actually an old demand of the parties, including the National Conference. It had said the CC should come out with its findings within six months, but the government did not act on the report—apart from posting it on the home ministry’s website. According to the report, the word ‘temporary’ in Article 370 should be replaced with ‘special’, which has been used for certain states such as Assam, Nagaland and Andhra Pradesh. From east and south of the country, the focus may have got northerly.