Crisis is opportunity.... the Congress must risk unpopularity for a cause 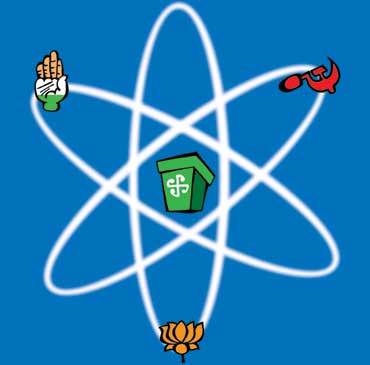 There is an old and delightfully ironic aphorism: some people are born great; others have greatness thrust upon them. Indian politicians could provide living proof that the reverse is also true. Not only are they born insignificant, not only are their concerns insignificant, but they can be relied upon to make sure that greatness is not thrust upon them even by accident. This became undeniably clear when, after his long talk with Congress president Sonia Gandhi, Dr Manmohan Singh delivered a virtual ultimatum to the UPA on the Indo-US nuclear treaty last week. That finally forced its smaller allies to declare where they stood.

To no one's surprise, like eight-year-olds at a kiddie birthday party, they wanted to have their cake and eat it too. One by one, Sharad Pawar of the NCP, Laloo Yadav of the RJD and Ram Vilas Paswan of the Lok Janashakti Party (LJP) declared their support for the treaty but also said they did not want early elections. M. Karunanidhi of the DMK went a step further and offered to show them how to eat the cake and keep it too: all they had to do was attend a meeting he was convening in Chennai.