An Ode To Climate Change Predictions

A big majority is no guarantee of a ‘perfect future’. The Modi sarkar needs only to look at our own history. 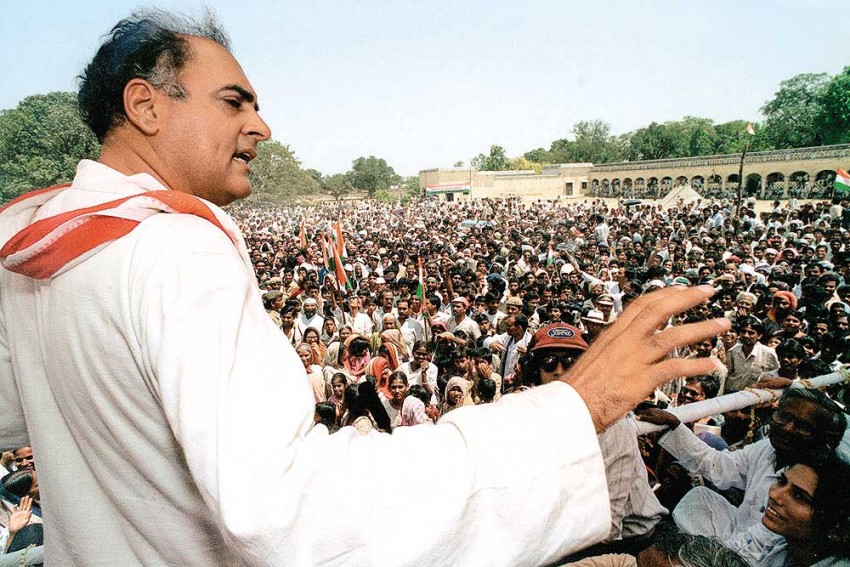 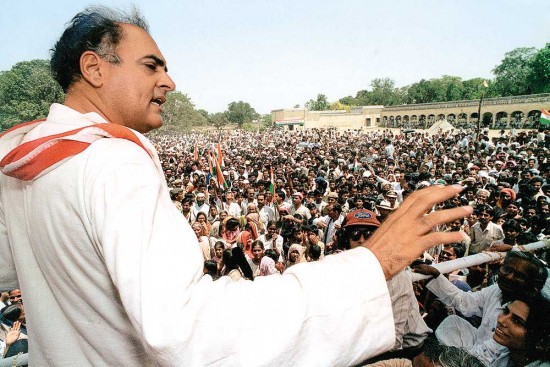 A little more than 57 months remain of the Narendra Modi sarkar. Even astrologers and clairvoyants would be wary about predicting what is in store in that vast empty space of 57 months. Whether the ‘future’ is perfect or imperfect is often judged after it enters the past tense. So we will know what the future ‘was’ during this time only in the last week of May 2019. The countdown for Modi, though, started from the sunset of May 26, 2014.

Narendra Modi’s refrain has till now been: you gave the Congress 60 years, give me just 60 months and I will change India. Brave words for the Brave New World, indeed. There is a whole new army of advisors, from Arvind Panagariya to Anil Ambani, from Ram Jeth­m­a­lani to Rakesh Jhunjhunwala who want to take India into the super club of economic powers and occupy a seat along with the G-8 and China. In the next five years, they visualise the Sensex zooming to 75,000 and Nifty touching the present Sensex mark of 25,000. The bulls have gone on rampage as it were, and will soon envelop the shining economy. Anil Ambani had said about three years ago that “Narendra Modi was a King of Kings and Lord of the Lords”. It was not a play of words, to describe Narendra as the new emperor. It was a corporate idea, whose time had come.

Together, the king and his bulls want to make the country free of the ghost of Nehru and the so-called Nehru-Gandhi family. The curse of Gandhi-Nehru or Nehru-Gandhi (there is a big ideological distance in that small hyphen), the bulls feel, will be over and India will be free from the chains of socialism and subsidy-driven welfarism. The Rashtriya Swayamsevak Sangh, which catapulted Narendra Modi to the dizzy heights of messiah prime minister, has now given, howsoever reluctantly, accredited status to Gandhiji. But even Nehru’s mere application for the status of national leadership will not be entertained (it is a different matter that he or his great-grandson will never apply).

Be that as it may, the question is whether we can see in the crystal ball any signs of the Brave New World that has been promised. The hype and the hope of that glorious India is based on some political myths. One of them is that the arithmetical majority for a single party in the Lok Sabha provides governmental stability. This myth has been exploded several times in the past. Yet political punditry and the media keep saying that the Modi-led BJP,  having got their own majority and the NDA back-up of over 60 MPs from 17 other parties, will give a stable government. 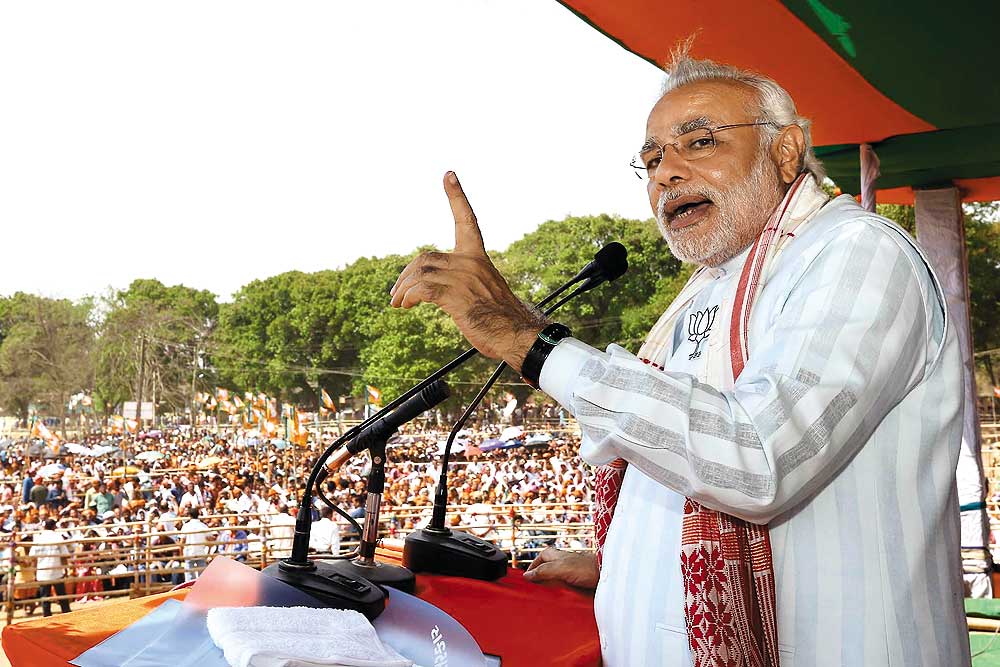 Lording it over Modi election rally in Guwahati, 2014. (Photograph by UB Photos)

But a single-party majority is no guarantee of governmental stability. I will cite three examples from the political-electoral history of the last over 40 years to show that massive mandates and media-driven personality dazzles have expiry dates. Indeed, the descent and fall starts unex­pectedly as charismatic fli­ghts encounter fatal air pockets. From the amb­itions of party colleagues to internal rebellion, from terrorism to war, from widespread droughts to global economic crises or from judicial intervention to the sudden eruption of political movements, many developments that can puncture the power balloons are perenially creeping into being. Nobody had anticipated the Jayaprakash Narayan-led ‘Total Revolution’ which challenged Indira Gandhi’s stunning majority with two-third MPs of her own party, in 1971. They were elected in the Indira wave generated by the Garibi Hatao campaign, preceded by bank nationalisation, abolition of privy purses and land reforms. That was the first ‘wave’, as it were, in India’s electoral politics.

The Grand Alliance of four parties—Congress (O), Jan Sangh, Swatantra and the Socialists—was routed and was in as miserable state as the Congress-led UPA is today. After that sensational electoral victory came the Bangladesh crisis and war. The victory in that war elevated Mrs Gandhi to the status of “Durga”, to quote Atal Behari Vajpayee’s celebrated praise of her. The Economist (London) described her as the ‘Empress of India’ in their cover story. The Congress won big majorities in all the states they had lost in 1967, including Kerala and West Bengal. It would be educative to recap the events to understand how and why Indira Gandhi hit the air pocket.

The euphoria and Indira charisma did not last beyond 1973. That year began the Nav Nirman Movement in Gujarat, which soon systematically spread to many parts of India on Jayaprakash Narayan’s call and with the support of the parties of the Grand Alliance. The movement had the most conducive atmosphere. The year witnessed the century’s worst global drought, which led to famine and food inflation and consequently acute scarcity of essential commodities. International crude oil prices rose sharply following the Arab-Israel war, with the opec countries dictating terms. That led to the rise in prices of kerosene, petrol, diesel etc.

The burden of the 1971 war had come to bear, so to speak (there were 90,000 PoWs and nearly 10 million refugees between 1971-73). The crisis was not of Indira Gandhi’s making, but it began to weaken her. The JP movement, meanwhile, saw the crisis as an opportunity. The movement became violent in Gujarat and Bihar and in some other parts. Almost the entire print media turned against Indira Gandhi. To add fuel to the anarchic fire, the redoubtable George Fer­nandes called for a nation-wide railway strike, paralysing the movement of essential commodities. That created further discontent. To add to Mrs Gandhi’s misery, the Allahabad High Court unseated her on a very minor charge. The Opposition was smelling blood now. The ‘Empress Durga’ was vulnerable. The curtains fell when JP appealed to the police and army not to obey orders. This was the backdrop of the Emergency. The debate on the Emergency is often conducted without taking into account the chaos, anarchy and challenge to the state which had forced Mrs Gandhi’s hands.

However, the point to note here is that the effects of ele­ctoral waves and swings of charisma are perishable in nat­ure. The second example in this context is that of the first non-Congress government at the Centre. The fantastic Janata Party victory in 1977, under the leadership of ‘Lok­nayak’ JP, was celebrated as a “second freedom”. Even the slogan of making India free from the Congress system and from dynasty (first given by Ram Manohar Lohia in 1967) became a reality. (The copyright for the slogan to make Bharat “Congress-mukt” and “dynasty-mukt” belongs to Lohia, not Modi. ) But that Janata celebration evaporated soon and the party of Total Revolution disintegrated by 1979. The Janata government collapsed and the “follow on” of the match was played under the prime ministership of Charan Singh. That government could not face Parliament because it could not mobilise enough support. So even the tectonic Janata and JP frenzy could not last for more than two years.

The third instance of political volatility is that of Rajiv Gandhi, who won 414 seats in the Lok Sabha, in 1985. The BJP was reduced to just two seats, far worse than the 44 of Congress today. Rajiv’s popularity was truly unprecedented. He had received over 49 per cent of the votes. (Modi has 31 per cent votes and 282 seats. Indira Gandhi won 283 seats in 1967 but her voteshare was nine per cent more at 40 per cent.) Yet, just after two years, the Rajiv Gandhi government suffered a major crack when V.P. Singh rebelled. The VP movement spread across the country and finally led to the defeat of the Rajiv-led Congress. The media has always been supportive of or soft towards anti-Congress forces. Mr Clean Rajiv Gandhi was replaced by the Super Clean V.P. Singh! Yet, neither the media, nor the anti-Congress mobilisation could sust­ain that government. It col­­l­apsed in just 11 months. However, it was not a single party majority government. This instance only highlights the fluctuations in the mood of the people.

Those of Modi’s fanatic or pathological supporters (as opposed to the fanatic and pathological haters) must look at history before rushing to their Android phones to join Twitter gangs to send hate messages and threatening e-mails. History never repeats itself, or if it does, it is only as farce. Nobody knows or can predict whether the Modi sarkar will hit an air pocket. It may or may not. Even if it does, the Opposition now is too weak, demoralised and disorganised to convert the crisis into an opportunity. So Modi can navigate through the turbulence for the next 57-odd months, but if the past is any guide to the future, one can only say that it could be ‘Future Imperfect’!