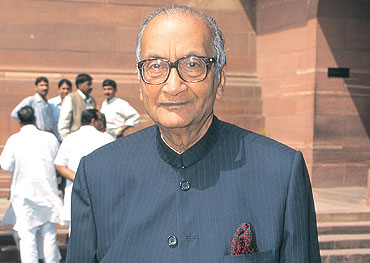 outlookindia.com
-0001-11-30T00:00:00+0553
The tributes to Krishan Kumar Birla (better known as K.K. Birla), who died last week at 89, were not just the usual, ritual ones served up on such occasions. They are a sign of the high esteem this industrialist of the pre-globalisation era enjoyed not only among his peers but across the political spectrum. It is a measure of his entrepreneurship and capacity to look ahead of his times that of the six equal shares into which the wealth and businesses of his illustrious father, G.D. Birla, were divided, he expanded his inheritance the most. Keeping the country's needs in mind, he gave a special place in his scheme of things to establishing fertiliser units. KK had another persona—that of a newspaper owner.

At a personal level he was meticulously courteous to friends, acquaintances and strangers alike. No one who went to him for help ever returned disappointed. Often he would go out of his way to offer help to those who needed it but were reluctant to ask. KK was deeply devoted to his extended family, but at the same time was very restrained and formal with them. It is said that he met his relatives by appointment. Nor did anyone ever accuse him of even a trace of flamboyance.

Since before KK's birth, the Birla family was involved in politics. GD was Gandhi's frequent host. It was at Birla House in Delhi that the Mahatma was assassinated. That house is now a memorial to the Mahatma. KK built his residence next door, living quietly in a five-star hotel while the house was under construction.

In his youth, KK met Gandhi and got to know Nehru and other leaders. But it was with Indira Gandhi and her family, especially Sanjay Gandhi, that he got really close. His loyalty to the Gandhi family, extending to Sonia Gandhi and her son Rahul in later years, remained steadfast. He stood by them through thick and thin. In fact, he was more loyal to them after the post-Emergency election in 1977 when Indira was voted out of power. The story goes that he would secretly send funds to whoever in her camp needed them. Even though he was on good terms with Morarji Desai, his government did not like KK's closeness to the dethroned Gandhis. This hardly deterred him, even when he ran the risk of being arrested. When Indira staged her comeback in January 1980, he was, of course, overjoyed.

A political bond of this sort with the ruling family was bound to impinge on the working of the Hindustan Times. But KK was unfailingly courteous to all his editors, even when he disagreed with them. Once, when Khushwant Singh wrote in his column that the Sikh religion was closer to Islam since both believed in only one God and no caste divisions, the proprietor wrote a rejoinder, giving it to the editor to publish, arguing that the Sikhs were actually a part of the broader Hindu framework. He was deeply steeped in the Hindu faith. But neither this nor his friendship with senior leaders of the BJP had any impact on his secular views.

Although Khushwant completed his tenure as editor of the Hindustan Times, the nasty quarrel between Indira Gandhi and Maneka cast a shadow on his last months in the editor's chair. But KK insisted that Khushwant continue his weekly column in the paper, which he does till today. Given the spirit of the times—a polarised and inflamed polity, resultant strife and a sycophantic Congress culture—this was not the only instance of its kind. George Verghese, who had become editor of the HT after serving Indira Gandhi as her information advisor for three years, had come to grief in the seventies. The Emergency took care of any legal action that might have been taken by him or on his behalf. Later, in the years when the tussle between Rajiv Gandhi and V.P. Singh was at its height, Prem Shankar Jha and H. K. Dua felt the heat and chose to leave. On the contrary, Vir Sanghvi has written that throughout his editorship he did not have the slightest problem with his proprietor even though they often differed.

It would be presumptuous of me to claim friendship with KK But I knew him well, and he was gracious enough to invite me to edit his paper or be a columnist for it. For various reasons, things did not work out. On one occasion, my dragging of feet evidently hurt him. But this made not the slightest difference to the impeccable courtesy he showed me.

A soft-spoken man, he was given to reticence, even silence. Once when someone criticised Dhirubhai Ambani, KK's comment, typical of his style, was: "Many of us do what Dhirubhai is doing. The difference is that what takes us 10 years to do, he does in a matter of months." It was in July-end that KK lost Manorama, his wife of 67 years. Her death may well have hastened his own end.

Hanging In The Air