A world-class institute, the FM's Rs 100-crore package aims to put the IISc at par with Harvard, Cambridge 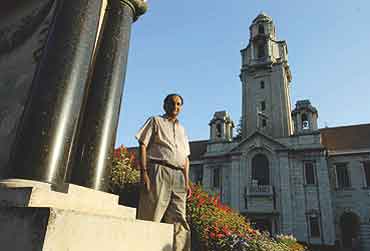 Only those uninitiated in history would argue that Bangalore's thrust to be a knowledge capital came with the IT boom of the '90s. In fact, its seeds were sown nearly a 100 years ago, when, as a fulfilment of Jamshedji Nusserwanji Tata's dream, the Indian Institute of Science (IISC) was set up with the support of the then Maharaja of Mysore, Krishna Raja Wodeyar. Now, this premier institution has got a major boost with Union finance minister P. Chidambaram announcing a special Rs 100-crore package for it in this year's budget.

By sheer coincidence, the government's gesture came on the very day C.V. Raman had announced his Nobel-winning discovery—the Raman Effect—to the world in 1928. Raman was also the first Indian director of IISC. The special package—which the present director Goverdhan Mehta called a "delightful surprise"—has been earmarked to help IISC attain the luminary position of Oxford, Cambridge and Harvard universities.

Speaking to Outlook, Prof Mehta (nominated by an Outlook panel as one of the potential Indian Nobel laureates in its July 14, 2003, issue) said: "We are overwhelmed by the government's gesture, it is heartening especially because we never sought it. This institute has a glorious tradition and nearly 10 per cent of India's scientific production, using published data as a measure, happens at IISC. That's huge. There are nearly 1,200 students working on PhD programmes here in various disciplines." In fact, the IISC's power has been such that all the important knowledge-based organisations set up in pre- and post-Independent India gravitated around it—be it HAL, ITI, BEL, BHEL, NAL or ISRO and, of course, in the recent past, the IT industries.

On the benchmark the government has set for the IISC to become a world-class institution, Prof Mehta says: "We are already world-class in selected areas, it is acknowledged by the international scientific community that cutting-edge research has been taking place in a number of departments here. This financial support will probably help us spread the culture of excellence to all the departments, it is with humility that we accept this challenge." He added that it is not money alone that will make an institution great, quality faculty and students, too, are required.

At present, IISC gets a non-plan grant of Rs 82 crore and a plan grant of Rs 30 crore and another Rs 40-50 crore is raised by the faculty independently for new and ongoing projects. With the additional Rs 100 crore, the money at IISC's disposal is around Rs 250 crore. It is another matter that endowments at universities like Harvard run up to nearly $50 billion. "We hope this is not a one-time grant. In our journey of excellence, we need funds on a sustainable basis. But, the culture of IISC has been that ideas must continue to flow, money or no money," says Prof Mehta.

But isn't it true that while IISC has been a great centre of science and engineering, Oxbridge and Harvard have had a long tradition of humanities and social sciences as well? "We are conscious of the fact that we need to interface with other knowledge streams. And interface does not mean starting new courses. We cannot follow the cafeteria approach. We want to get great minds of the sciences, social sciences and humanities to interact. We have begun the exercise through the department of contemporary studies and will take it further. In fact, the original vision of Jamshedji Tata was that IISC should pursue all branches of knowledge. He even asked an ascetic like Swami Vivekananda to be its first director," relates Prof Mehta.

When the director is requested to pose for a picture, he quietly walks out of his chamber and positions himself next to the statue of Jamshedji Tata gently looking at the sky. The plaque below reads: "To his foresight and patriotism IISC owes its origins and to his munificence a great part of its endowment."