An Indian In 'Azad Kashmir'

Nostalgia, hate, metaphor, reality—all greet us on a first trip to Mirpur 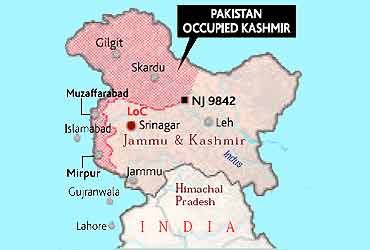 Mirpur nestles in the hills. As our convoy of two buses and a police van winds its way up, large bungalows loom up in the darkness. They are sprawling, massive enough to make those in Gurgaon seem like servant quarters. Most are empty. I'm told, like the Cubans, there are more Mirpuris outside Mirpur—indeed outside Pakistan—than in Mirpur. Mirpuris visit the place once a year. And they wage their war for Kashmiri independence from abroad, mostly against India but also against Pakistan. Those here, I'm told, dream more frequently of getting out of here than of independence.

We're at Hotel Jabeer, a two-star. At dinner, people with torches appear out of nowhere, raising pro-independence slogans. They disappear as suddenly, ghost-like. At midnight, an old man goes around knocking on doors, wishing to speak to visiting journalists from India and, yes, India-held Kashmir. These are two different entities in Mirpur. The old man offers me Urdu books. I can't read Urdu. He's disappointed.