An Eye On The Exit Gates 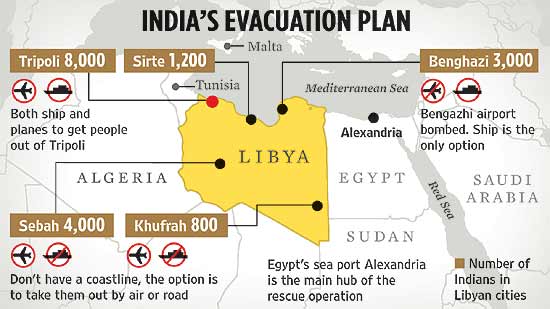 As Libya teeters on the brink of chaos, India has prepared an elaborate contingency plan to evacuate some 18,000 Indians employed there, chiefly in blue-collar jobs. About 8,000 Indians are in Tripoli, the capital; another 4,000 are in Benghazi, an important oil and gas production centre over which Muammar Gaddafi is said to have lost control (see map). “We are not sure how the situation in Libya is likely to pan out,” says a senior mea official, “but we are keeping a contingency plan in place in case we have to evacuate our people at short notice.”

It has been decided that the decision to leave Libya will be the individual’s. Officials say most Indians are safe, as they live in the residential complexes of the companies employing them. Yet the contingency plan has been prepared in view of dire predictions about a civil war engulfing the country.