An Eye For Head, Neck & Shoulder

Pranab, the presidentship and why the question is still fraught in many ways 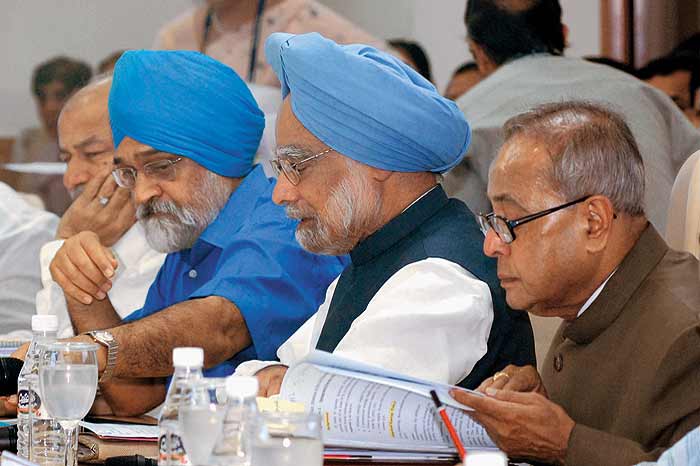 President Pranab Mukherjee or Deputy Prime Minister Mukherjee? Outlook has learnt from well-placed sources that the Congress leadership will offer the Union finance minister the title of deputy PM. The idea is to persuade him to accept this high rank and deflect him from his current path of exaltation in pursuit of the goal of becoming the next president of India. Yet, a deputy prime ministership by itself is not a constitutionally sanctioned position; hence, an incumbent must hold some important portfolio (for instance, L.K. Advani was both home minister and deputy PM).

But these tentative plans on a new post for Pranab have a most surprising genesis. In a startling disclosure, sources in the government say the pressure to move Pranab from the finance ministry has been mounting. A section of corporate India has strongly suggested to the Congress leadership that for all his political skills, Pranab Mukherjee is not quite the finance minister of their choice. The thinking now in the Congress leadership is that—with the economy not doing well and prospects for the future dim—there is a desperate need to calm an increasingly distressed business community. Although Pranab has traditional links to powerful business houses, he is not seen as a finance minister who is particularly sensitive to the needs of corporate India.

Should Pranab agree to deputy premiership, it would be a convenient way of easing him out of the finance ministry. Party sources say that a section of the Congress leadership believes that Planning Commission deputy chairman Montek Singh Ahluwalia inspires more confidence in corporate India than any other possible contender for the FM from the Congress. His appointment would also please Prime Minister Manmohan Singh. All such plans are, of course, only at a preliminary stage and no real decisions have been taken.

There is another factor at play in the Congress’s current line of thinking: the realisation that 2014 is rather likely to be a lost election. Therefore, there is no plan to position Rahul Gandhi for the prime ministership. As a party source says, “it’s a job that’s likely to be lost, so why expose him”.

Although politics has a way of pulling surprises, the plan for the remaining two years of UPA-II is to conduct a damage limitation exercise, have no great expectations for 2014 and be prepared for an unstable “khichdi” that will collapse in a few years. “Rahul Gandhi should plan for 2017,” says a veteran leader.

The BJP and NCP back Pranab as they think it’s good politics to force the Congress to take decisions it doesn’t want to.

But the immediate issue at hand is not the future of Baba, but that of Dada. There is the curious play of light and shade about Pranab’s candidacy for president—while it has acceptability across the political class, a question mark hangs over it about the necessary go-ahead from No. 10, the Congress high command. There is the possibility that Pranabda would press hard for the president’s office (a post he would occupy for five years, as opposed to two years as a possible deputy PM) and Sonia Gandhi would agree, particularly as he and his backers have made many backroom moves to garner support.

But Pranab is not without enemies in the Congress, leaders rumoured to have their own aces to share with the ultimate arbiters and damage his candidacy for president. The current situation is that Pranab is the main political manager for the Congress, a role enhanced during sessions of Parliament. Who can replace him in that role, Congress leaders ask? But then, no one is indispensable, except for the Gandhis themselves, other Congress insiders reply.

The “you are indispensable” line of argument is the one likely to be deployed before Pranab, along with the sop of deputy PM. But no one has a full picture about the inner wranglings within the party or, significantly, the mind of Sonia Gandhi, that will determine the exact course of events. In Parliament this week, she told journalists to be “patient” as the final decisions would take a while. The Congress is expected to announce its candidate by the end of this month or in early June after the Election Commission issues the notification for the presidential polls. The new president must be sworn in on July 25.

Two names—Vice President Hamid Ansari and Pranab—have been floated by the Congress and regional parties have been sounded out about them. Sources confirm the party high command would prefer Ansari, as they believe he has secular credentials and stature. Although not a politician, Ansari is not “apolitical”—a phrase repeatedly used in recent weeks by parties to refer to their preferences and drop hints.

Laloo Prasad Yadav’s RJD is the only party to state a preference for Ansari. But across the spectrum there appears to be a greater support for Pranab, and parties have various reasons for this. The bjp’s preferred strategy would have been for regional parties to back former president Abdul Kalam. But LoP Sushma Swaraj did that cause harm when, asked about Ansari, she tactlessly said the vice president didn’t have the “stature”. That whiff of bias meant parties like SP, tmc and ally JD(U), who could have supported a Kalam candidacy, had to distance themselves from the BJP on this.

Meanwhile, as a leader puts it, the BJP has moved on to the “next best” route—backing Pranab, as the latter may be a candidate whom the Gandhis may not really want, but may accept under pressure. Mamata Banerjee has also sent the “signal” that she prefers Pranab to Ansari because the former is a Bengali, although she has taken no public position and has other, pressing financial demands. The SP and BSP, both with big chunks of votes, have not revealed their preferences, though logically they should back Ansari, who comes from a respected Uttar Pradesh family.

The NCP is backing Pranab behind the scenes and exhorting other regional UPA allies to do likewise, also on the same principle as the BJP that it is good politics to force the Congress leadership to take decisions it does not really want to. The Left parties have stated that they will wait for the Congress to announce a candidate, and they could back both men, although off the record they prefer Ansari. The major NDA ally, the JD(U), has for the moment decided to assert its independence from the BJP and a party source says the possibility of backing Ansari cannot be ruled out.

The future is pregnant with possibilities. Things will only start moving after the Congress formally announces a candidate. But handling the party’s Dada is critical before the next step. It’s the time to speculate and see if he prevails and persuades Mrs G to make him rashtrapati.

Nitya Ananda It Is