An experiment with grassroot education without the interfering system 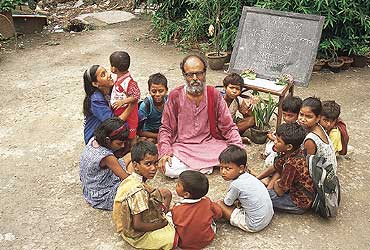 Nilayan Dutta
Ranjita Biswas May 21, 2001 00:00 IST An experiment with grassroot education without the interfering system

outlookindia.com
-0001-11-30T00:00:00+0553
Till a few years ago, muck and roaming pigs greeted you at this spot at Kadapara, off the Eastern Metropolitan Bypass in Calcutta. Today, a neatly-swept courtyard and a nursery with young, vibrant plants vie for attention. A modest board announces: "Sevak Nagar". Perhaps, on your way to the swank heritage park that has come up next to this Harijan colony, you'll find a band of young children singing to the rhythm of tambourines. Curious, you ask, who's behind this transformation? The voices, young and old, exclaim in unison: "Master-moshai" (teacher sir).

Master-moshai, Kalyanbroto Das, emerges from the crumbling cottage, his emaciated frame belying the dynamo of energy he is at 54. He has lived in this colony with his wife and two daughters since the '70s after he decided to shift from his village Mirgoda in Midnapore district. But the seed of his social commitment was sown in the village itself. Recalls Kalyanbroto: "My teacher told me I cannot achieve anything since I stammered." But he had his own ideas about education. "The way the teachers taught us, whether it was Africa or Agra, all seemed the same. Why not make it more interesting?" He also regretted that he was born too late to participate in the Independence movement. "But we can help in nation building, I thought. Education is the key, I decided." Thus at 14, the naughtiest boy in the village formed Samaj Sevak Sangha by roping in a few friends. They worked among children of the poorest, low-caste farmers and Muslims. Classes were held in an abandoned house.

Later, Kalyanbroto came to Calcutta to study in college but had to leave halfway for lack of money. But he continued searching for a place where he could experiment with his grassroots education dream without the "system" interfering. He found the sweeper colony on the fringe of the posh Salt Lake ideal—nobody seemed interested in the community. Addiction to liquor and drugs, wife-beating and polygamy were the accepted norms. (A broken tooth is evidence of his intervention in a family quarrel). For the children, school was a distant dream.

Today, Sevak Nagar symbolises a change from within. The wards of those in the first batch of students now go to regular schools (he still doesn't like the idea of mainstreaming but accepts the reality). The colony is neat with a community hall at the centre. He believes in managing with available resources. Seeds from trees are used to teach counting. As we talk, a child runs in with the seed of a Gulmohar flower. Kalyanbroto splits the elongated pod and shows how the grooves can be used for counting even with eyes shut. The plants at the nursery, Dr Ambedkar Prakriti Bharati, are looked after by the children themselves. "It's a good way to teach them about nature and the benefits of different herbs."

With the same ingenuity, he found a way to provide nutrition for the children when he started out. "At Burrabazar, they paid 85 paisa for carrying a sack of potatoes. I earned around Rs 30 a day. With that money I bought slates, books and soyabean to extract the milk."

For his innovative work, Kalyanbroto was given a Rippan Kapur cry Fellowship with which he operates seven pre-primary centres, two coaching centres and two non-formal education centres to cover about 500 children. Besides, he networks with 18 centres. He also runs two footpath libraries with books bought from second-hand shops and donations. He buys discarded posters and calendars by the kilo from the vendor to use as colourful illustrations. His wife Shibani Das chips in with money-saving ideas. Recreational vocational training involves music, sports, reading, and sometimes even summer camps in the backyard. Now he plans to launch a multi-purpose programme with one social worker for every 15 families so that not a single child is deprived of his/her rights for education and health.

The buzz On JPC