Home  »  Magazine  »  International  » us: domestic violence »  An Alien In Your Home

An Alien In Your Home 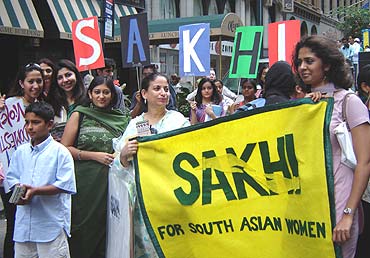 But abusers refuse to file a joint application. Domestic violence (DV) victims can self-petition, but must provide proof that the marriage was conducted in good faith.

Open to all DV victims regardless of their spouses’ immigrant status

Those on H4 visa are disallowed from working legally in the US. Lack of independent finances prevent DV victims from walking out of abusive relationship.

But victims can secure the V visa.

It allows DV victims to work legally in the US.

But the process to obtain this visa is tedious.

Anita never knew what love was until she met Amit, a handsome entrepreneur who paid attention to her every need. Love-struck, she didn't think twice when he asked her to marry him. The couple had a fairytale wedding, and moved into a posh New Jersey suburb with manicured front lawns. Anita and Amit were a couple typical of the 'model minority'—educated, upwardly mobile, cosmopolitan, and yet bound by strong familial ties.

"It got to a point where every time I left the house I'd wear dark glasses so no one could see the bruises around my eyes," Anita recalls. But her bruised spirit was evident to those who knew her. Looking back from the vantage point of a single, financially independent person, Anita can't believe she stayed in the marriage for three tortuous years. "I wanted to leave but my family would say it's my job to make this marriage work. They didn't want me to get a divorce, even approach a counsellor," she says. "We don't do these things," her older brother admonished. "Divorce is for Americans."

The nearly two million-strong Indian American community's image of a 'model minority' has been shattered by cases such as Anita's. "The community was often called a model minority—a group that was hardworking, with very strong family values. It wasn't the reality but that was the image," says Margaret Abraham, author of Speaking the Unspeakable: Marital Violence Among South Asian Immigrants in the United States, who also teaches sociology at Hofstra University in New York.

The first group to tackle the issue of domestic violence in the community was Manavi, which was formed in 1985 by Shamita Das Dasgupta and five others in New Jersey. In its early years, Manavi encountered tremendous hostility from the community. "They thought we were westernised feminists who were trying to put our community down," says Dasgupta. Mukta Sharangpani, general secretary of Maitri, a group based in the San Francisco Bay Area, recalls similar animosity against volunteers of her organisation. "The community would accuse us of washing dirty linen in public," she says. Agrees Purvi Shah, executive director of New York-based Sakhi, "The community didn't understand that we weren't about breaking families."

Today there are nearly 25 organisations that help battered Indian women (and other South Asians), testifying to the menace domestic violence has now become in the Indian American community. Ironically, the sheer sweep of the problem has also brought acceptance of these groups, a grudging realisation that it doesn't help to conceal deep wounds and ugly scars of the community. The acceptance of these groups has seen calls for help to them skyrocket. For instance, calls to Sakhi have tripled since 2001. "We received 200 calls in 2001. Last year we got 685," says Sandeep Kaur Bathala, direct services director at Sakhi. But the increase is more a consequence of a "higher rate of reporting," argues Abraham.

In most of these cases, the underlying cause is sociological. Men are raised in a patriarchal society where they have no qualms about abusing their partner. Worse, women are taught to accept the abuse. Immigrant women, as against second-generation Indians, have a harder time because of their immigration status, language barriers, social isolation and lack of financial resources. In the community, where extended families are the norm, in-laws at times abuse young brides. "Extended families can be both a buffer and a nuisance," Abraham says.

Manisha married an eligible young man who ran a motel in Texas. She arrived in the US to the news that her parents-in-law were getting a divorce. Her father-in-law stayed with the young couple and often directed his rage at Manisha. "He was bitter about his divorce and would often abuse me," she says. In an alien country, she struggled to understand thick American accents at work. At home, her husband would monitor her diet and chide her for being too fat. "He wanted someone who looked like Aishwarya Rai!"

Manisha's husband came to America as a young boy. "He used that to his advantage. When he wanted to be macho he was American, and when he wanted his wife to wait on him he was desi," she says with a laugh. Her torment took an ugly turn when he once grabbed her by the throat because she fumbled a calculation at a bank. Manisha dreaded returning home from work. Ultimately, she moved into a shelter for battered women, which helped restore her self-esteem as she was surrounded by women who had been through similar situations.

"Typically there is physical violence that may not lead to death, but to the death of self-esteem, which is just as bad," says Sharangpani. "Before the first slap comes, most women are unaware that they are in an abusive relationship." It is not uncommon for some cases to end in death—either of the battered woman, or of the batterer by a wife who has decided to retaliate.

Apart from broken bones and separation from children, Indian women have also seen such situations end in them being deprived of their travel documents and dumped in India. US immigration laws have, ironically, created conditions conducive to marital abuse. Under the Immigration Marriage Fraud Amendment of 1986, immigrants married to US citizens or lawful permanent residents for less than 24 months at the time of coming into the US are granted a "conditional residency" for two years. Within 90 days before this two-year waiting period ends, the couple must file a joint application to have the "condition" lifted and obtain "permanent residency" status for the immigrant spouse.

The government imposed this condition to stem sham marriages—where US citizens would marry immigrants for a fee and a promise of citizenship. For battered women trapped in abusive relationships, this policy made it even harder to imagine a life independent of the batterer. To fix this, the Violence Against Women Act of 1994 allows battered women whose spouses refuse to file a joint application to self-petition for becoming legal permanent residents. However, such women have to provide proof that the marriage was conducted in good faith.

Immigrants who are victims of certain serious crimes, including domestic violence, are eligible for the interim U visa created in the Violence Against Women Act (VAWA II), which was passed in 2000. The U visa is open to all domestic abuse victims regardless of their spouses' immigrant status. However, the regulations for the U visa have not been drafted. Shah of Sakhi points to the problem—to qualify for a U visa, a woman must have suffered substantial physical or mental abuse; a police officer or a judge must certify that the woman will provide information for prosecution of the crime. But this isn't a path many battered women want to take. "We need to look at alternatives besides criminalising domestic violence," says Abraham. "Not everyone wants to see their spouse sent to jail."

Charu Narang, in her work as a legal counsel for the Washington-based Asian Women's Self-Help Association, noticed financial dependency was a key factor in binding a woman to her abusive husband. "In cases where the woman is on an H4 visa, which prevents a person from legally working in the US, the abusive spouse repeatedly and consistently uses the threat of lack of financial resources and deportation to keep the woman tied to him," she says. A woman on an H4 visa is unable to get an official job and so is relegated to seeking those with low salaries. "None of these jobs pay enough for her to survive on her own, and, thus, she is forced to put up with abuse," Narang says.

Though the V visa allows victims of domestic violence to change their status and obtain a work permit, the tedious process often deters women from availing of this option. "Abusive people understand exactly how they can keep the abused under their control. Using the threat of lack of ability to work on an H4 visa, family shame if such abuse were to become public, and deportation provide abusers with very strong bases for keeping control," Narang says.

Bathala of Sakhi says it is a misconception that all this afflicts only those who are less educated or financially insecure. Nor is there any correlation between arranged marriages and domestic abuse. San Francisco Bay Area resident Kamala's was a love marriage. She met her husband while working in Mumbai. Kamala moved to the US for further studies and her husband found a job, which he left soon after. This turned out to be a pattern. Long periods of unemployment were filled with physical violence directed at her. "The kids would scream, pleading with him to stop hitting. But the abuse continued," says Kamala, who got a divorce in 2003. Her life has flourished ever since.

But not every woman is as lucky as Kamala. The ability to walk out of an abusive relationship depends on the lifestyle the abused is used to. For instance, in California's Silicon Valley, where a large number of Indian professionals stay, walking out of a home, let alone a relationship, isn't easy. The scarcity of public transport means relying on a car, and many immigrant women don't know how to drive. Rents are prohibitive. Many of Maitri's clients who ended relationships have moved from upper middle class to living on the fringe. "They feel guilty of depriving their kids of piano classes, etc," says Sharangpani, adding, "We can't promise that the world out there is going to be any easier for a single woman/mother."

Ultimately, as Shah of Sakhi says, the only way out to tackle this menace is for "the community to let the abuser know that this behaviour is not acceptable." Indeed, a model community will need to stand up for those whose rights are trampled upon with impunity.