An Act Of Bad Faith? 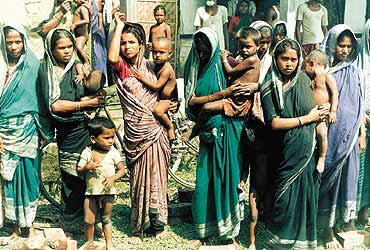 outlookindia.com
-0001-11-30T00:00:00+0553
A silent fear has started stalking the streets of Assam all over again. It's to do with a testy old question in the state's politics. And the credit for it goes to a sudden move by the Centre, which has again raked up a vicious cycle of sectarian controversy and bad faith. For Assam chief minister Tarun Gogoi, the Centre's May 6 decision to introduce a bill repealing the Illegal Migrants (Determination by Tribunal) Act—IM(DT) Act—could not have come at a more inopportune time. Gogoi was planning a grand celebration of his government's second anniversary, but the confusion and fear that the minorities in Assam are bound to feel after the proposal has arrived as a dampener. After all, the Congress has always supported the act, which the BJP and some regional parties have trashed as discriminatory.

The IM(DT) Act, passed by Parliament in 1983, has for long been a terrible bone of contention in Assam. Its supporters say it helps provide safety measures against the harassment of minorities. At the core of the controversy is the decades-old question of illegal migrants from Bangladesh. As per the act, which is applicable only in Assam, the onus of proving that an individual is a foreigner lies with the accuser. In contrast, according to the Foreigners' Act, which prevails in the rest of the country, the onus is on the person suspected to be a foreigner to prove that he/she is an Indian citizen. The Congress had introduced the IM(DT) Act to protect minorities from being arbitrarily detained and deported by the police.

Now, the ground rules could change all over again. Gogoi, though, is putting up a brave front: "This is nothing but a political gimmick by the BJP with an eye on the coming general elections. Why is it that the NDA decided to repeal the act towards the fag-end of its term?" He made it clear that his party would oppose any move to repeal the act. Gogoi's government, on assuming office in May 2001, had withdrawn an earlier Assam government affidavit in the Supreme Court favouring repealing of the act.

Congress MPs argue that the move is essentially to bring up the issue in Parliament so that a controversy flares up. With the Supreme Court yet to dispose of a petition against the act, it's unlikely that Parliament will be pushed into voting on the issue. "It will only create tension in Assam," says an MP. Gogoi's public declaration that he will oppose the scrapping of the act has found support among minority organisations. Hafiz Rashid Ahmed Choudhury, president of the United Minorities Front (UMF), termed the Centre's move as a "political gimmick". "The BJP is hoping to gain some seats in Assam in the forthcoming parliamentary elections by demonstrating that it is fulfilling its long-standing promise. The minorities will now face a fresh round of harassment," he warns.

Concurs Abdul Muhib Mazumdar, a former Congressman, known as the author of the IM(DT) Act: "The NDA government's decision will create a fear psychosis among genuine Indian minorities. It will eliminate in one stroke the judicial protection that ordinary people had against police harassment." Both Mazumdar and Choudhury are quick to point out that the Foreigners Act, 1946, gives judicial powers to the police in matters of detection and deportation of alleged foreigners.

Predictably, the Asom Gana Parishad (AGP) has welcomed the Centre's decision. AGP president Brindaban Goswami says: "The IM(DT) Act was a threat to the nation's integrity. The Centre's decision meets our long-standing demand. However, we will be satisfied only when the repeal actually happens." The AGP believes that although the Congress and the UMF claim that the act was not a hurdle in the detection of migrants, statistics prove that the number of migrants "thrown out" has actually come down.

Outgoing Assam Governor Lt Gen (retd) S.K. Sinha had called for replacement of the act with a new legislation which can detect illegal migrants in a "just, fair and expeditious manner". As is well known, Sinha has been at loggerheads with Gogoi on the issue.

Political analysts here see more than a hidden agenda in this latest round of sectarian realpolitik, initiated after the Centre's mysterious move. Even if the BJP-led NDA government does not do away with the act in this Parliament session, it has certainly succeeded in opening nasty, old wounds in a state which has a long memory. And that, as locals will tell you, is like playing with fire.