Home  »  Magazine  »  Society  » US universities: lessons in hindi »  Amrika In A Hindi Accent

Amrika In A Hindi Accent

Some do it for Bollywood, some for folks 'n jobs; Hindi acquires fans in the US 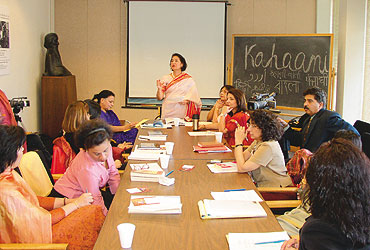 He played Adjutant Bunbury, an officer of the East India Company, and she, Lady Canning in Ketan Mehta's The Rising: Ballad of Mangal Pandey. Dressed in period costumes and awaiting their moment in the arc lights, Joel Guyton Lee recalls being dazzled by Joanna Slater. "I saw this behad khubsoorat young woman reading Premchand. She was evidently a foreigner, yet engrossed in Hindi literature. I was intrigued," recalls Lee. The two tried to impress each other with their Hindi. When apart, Lee would send Joanna lines from Ghalib in text messages. "Why use only love, when you can say prem, pyar, ishq, mohabbat," Lee asks.

What's unique about this love story is that Hindi is not the mother tongue of Lee, an American, or of Joanna, a Canadian. "I listen to songs from Raj Kapoor films and feel lovesick. I just love the language," says Lee. The couple's passion for Hindi illustrates the growing interest in Indian languages in the United States. But the packed classes for Hindi at top universities across the US also reflects its warming relationship with India.

Though it wasn't exactly to promote a love for Hindi that President George W. Bush launched the National Security Language Initiative, the plan has inadvertently provided an impetus to the study of the language. Bush's initiative aims more at strengthening national security via education, especially in developing foreign language skills. The US President hopes the initiative will produce 2,000 advanced speakers of Arabic, Chinese, Russian, Persian, Hindi and Central Asian languages by 2009. Top universities, including the University of California at Berkeley, the University of Chicago, Princeton, Harvard, Yale and the University of Pennsylvania offer Hindi. Conservative estimates put the number of students learning Hindi at 20-odd US universities at about 2,000.

One American university will soon be picked to offer an advanced level programme in Hindi and Urdu. "We'll start with students who know Hindi—get them to a level where they can read newspapers, do translation and so on," says Herman van Olphen, a Hindi professor at the University of Texas, Austin. "The purpose is to take those who have gone through elementary programmes and bring them up to a level where they can serve the country in terms of using Hindi in a practical way." But national security has ceased to be the sole reason Americans are flocking to learn Hindi, the growing interest in the language is also attributed to a need to stay in touch with Indian relatives, enjoying Bollywood movies, and the fact that a lot of Americans are moving to jobs in India.

When Susham Bedi started teaching Hindi at Columbia University, New York, in 1985, there was just one section for Hindi students. Today, the university has three sections with up to 80 students each. Bedi attributes this growth to India becoming "very important on the global scene and its relationship with America getting stronger".

Mekhala Natavar, whose Palestinian father and mother of Lithuanian origin instilled in her a love for different cultures, teaches Hindi at Princeton University and helped develop the Hindi programme at Duke University. "In previous decades, Hindi programmes were filled with students who wanted to do research work in anthropology and religion, or perhaps social work in the region," she says. "Now that jobs are going to India from US companies, some are considering jobs that include travel to South Asia for business." Adds Arun Prakash, who set up the Hindi programme at Rice University, Houston, "When the corporate world is interested, universities and schools also get interested."

Darshan Krishna's past students include US diplomats on their way to postings in South Asia. Director of Bethesda, Maryland-based India School, she says some students are learning Hindi because they have an Indian spouse or, she adds with a laugh, "they want an Indian spouse!" Amber Howell confesses her motivation to brush up on her Hindi stems from her desire to win over an Indian boyfriend's mother. Howell, who works at the Mayo Clinic in Rochester, Minnesota, will be visiting New Delhi soon to meet her partner's parents. "In many ways I'd be viewed as an outsider; communicating in Hindi is one way I could bridge that gap," she says.

Then there are the veritable polyglots. For Gabriela Nik. Ilieva, it was her high-school Sanskrit teacher who got her interested in India and Indian languages. "He entered our class for the first time and one of the words he taught us was vimaan (airplane). We jumped at him, saying it was impossible; such things didn't exist in ancient times. He took a deep breath and quietly said, 'You have so much to learn about gods and myths that I don't know where to start'."

Born in Sofia, Bulgaria, Ilieva had started learning Russian, French and English before high school. Along with Old Greek, Latin and Old Church Slavonic, she took Sanskrit as well. "Right away, I was enchanted with the script, the language and the culture behind it," she says. Ilieva entered the MA programme in Indology at Sofia State University, where she studied about 12 hours of theoretical and practical Hindi a week for five years and also took classes in Urdu, Sanskrit, Punjabi and Persian. She now teaches Hindi/ Urdu language and literature at New York University, and believes Bollywood movies are a must-use teaching methodology because they allow a holistic approach to language along with high entertainment value. At Harvard, too, conventional teaching materials are supplemented by popular songs and clips from contemporary Indian cinema.

A number of students in Hindi classes are 'heritage' students, or people of Indian origin. A law student who also studied Hindi at Duke University, Sachin Bansal spoke his first words in Hindi, but he could neither read nor write the language. Now that he can do both, he says he's better able to communicate with his family in India. Divya Sawhney too grew up speaking Hindi but never knew how to read or write it. Her family moved to New York from India when she was four. "I've always been a bit frustrated with my family for having moved without me being exposed to even a year of written Hindi," she says. At Columbia University, she seized that opportunity.

Maggie Cummings credits a one-year stint at an Indian restaurant in Providence, Rhode Island, for her proficiency in Hindi. Employed at the Smithsonian Institution in Washington, DC, Cummings majored in Hindi at Brown University and now teaches a class of 12-16-year-old Indian American students at the India School in Bethesda. And this fall, Lee will be taking classes in Urdu and Hindi literature at Columbia University. "Hindustani meethi zubaan hai," he says. A sweet pill US is popping.