The Congress' glee over the BJP's scandal-wracked squirming is over. It now has its own crime of passion. 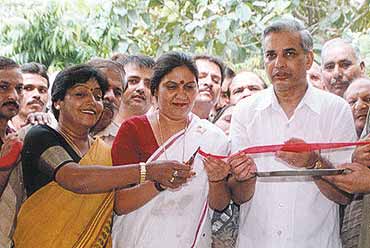 outlookindia.com
-0001-11-30T00:00:00+0553
The Congress’ glee at the BJP’s discomfiture over the Shivani murder case was swiftly punctured last week when three of its Delhi politicians were found to be allegedly involved in a murder case—one (Atma Ram Gupta) as victim, another (Sharda Jain) as perpetrator and the third (Memwati Barwala) as the ostensible motive. Senior Congress leaders are nervous and have reportedly briefed Jain on what to tell the police.

The initial reports of a love triangle were based on Sharda’s statement to the police that she was jealous of Gupta’s interest in Memwati. But things could be more sinister, with police sources saying there was a money angle to it as well. Closely linked with the "tender mafia", Gupta had apparently received—along with another influential corporator—Rs 5 crore in advance for ensuring that an octroi contract went to a particular party. The total deal was for Rs 15 crore, but was jeopardised by a Supreme Court order banning entry of trucks into Delhi.

The money was allegedly kept with Sharda, Gupta’s friend, whose benami farmhouse on the Ghaziabad-Hapur road he often used as a place to stash away cash. When Gupta, under pressure from the mafia, wanted the money back, she refused—apparently out of pique over his relationship with Memwati. A second-term corporator and proprietor of four pvc units in Tri Nagar, Gupta was never short of cash.

Gupta went missing on August 24 after Sonia Gandhi’s rally at Ferozeshah Kotla ground, from where Sharda allegedly picked him up. According to joint commissioner of police Ajay Chadha, Sharda confessed that she had Gupta eliminated.

The case could prove embarrassing for the anti-Shiela Dixit faction in the Delhi Congress, namely the Kamal Nath-Sajjan Kumar-Subhash Chopra triumvirate. Sharda’s ticket had been opposed by Dixit but was backed by the Nath-Chopra duo. Kumar has denied supporting her candidature. However, she was supported by two of his men, Puran Mal Goyal and Rajinder Singh Joon.

Sharda, a religious lady who often distributed prasad, didn’t exactly enjoy a spotless reputation, though. During her campaign, her sister-in-law, Chhaya Jain, printed posters alleging her intimacy with a number of Congressmen. Her husband had disappeared two years ago, allegedly taking with him Rs 20 lakh from a chit fund.

Her colleagues often pulled her leg because her rival, Memwati, had been made Rohini zone chairperson and was even being considered for the mayor’s job. In ’98, letters were sent to Delhi legislators alleging an affair between Memwati and Gupta, duly signed "Congress ka shubhchintak".

There’s more embarrassment in store for the Congress. Ram Singh Sharma, a local leader from Dadri, and R.C. Sharma, a Congress worker from Keshavpura, were found murdered soon after the Gupta incident.