Compared to the rhetorical, documentary-like Lajja, French Lover is an evolved creation. It's much better written. Very empathetically translated too. 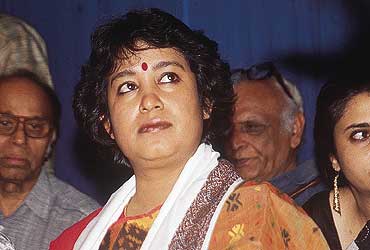 French Lover
By Taslima Nasreen
Penguin Pages: 293; Rs 250
Nilanjana moves from her home city Calcutta to Paris after her marriage. Her unsuspecting husband Kishanlal is a small-time restaurateur in that liberation city.

Kishanlal is small-time in other ways too. His love-making for instance would put a dead man to shame. Down where it counts, Nilanjana is the equivalent of the Gujarat earthquake waiting to happen. Kishanlal can’t even trigger a tremor in Nilanjana’s fluid, tectonic sexuality. Worse, Kishanlal expects Nilanjana to vacuum the house and cook; and when he returns in the evening—which, alas, is everyday—he expects her to wait on him. In return, Nilanjana gets free lodging and boarding, and lots of spare time. This is not a bad bargain as bargains go, but feminists like Nilanjana can’t recognise a deal even if deals develop teeth and bite them. Ah, yes, there’s one more thing which gets on Nilanjana’s nerves: Kishanlal is a convulsive disappointment when it comes to understanding the fine things in life, such as music or the full moon.

Surely you can only pity a man like Kishanlal? Nilanjana pitilessly pities him, and then walks out on him. And Paris opens her arms wide for Calcutta’s answer to Madame Bovary. A new, improved version of the grande dame, dark of skin and dripping with attitude. What follows is a sort of conducted tour of Paris in terms of the Western Experience. Nilanjana moves in with a lesbian feminist writer, has sex with her, and discovers that the tongue is just as reliable an agent of orgasm as the Main Male Thing. In other words, Nilanjana grows spiritually and emotionally.

Nilanjana has to cut short her Paris experience as she flies back to Calcutta to be with her self-sacrificing mother who is dying of cancer. Overcome with grief at her terminal state, and furious with her father who is a male chauvinistic pig—in Nilanjana’s world, the chauvinistic pig is, monotonously, a male. In a neat reversal of the Hamlet-Gertrude bedroom scene, Nilanjana confronts her father with his sorry handiwork, his wife. But the man thinks his daughter is out of her mind. So would you if you are a normal Bhadralok Bengali.

Before the mother dies, she hands the prodigal daughter a cheque for Rs 20 lakh. A politically correct matrilineal largesse to pay for the daughter’s higher education as it were. Soon after this act of woman to woman empowerment, Nilanjana returns to Paris and falls in love with a married Frenchman. Benoir Dupond is 6 feet 3, blond with blue eyes and, guess what, he has a "giant penis". Hell, so that was what it was all about, eh? This fantasy is actually pretty good reading, because the sex scenes are written very, well, like a man.

But, Nilanjana tires of Dupond. Why? Doesn’t she want wonderful sex anymore? No, it’s just that she realises that Dupond’s first priority is himself, not the woman he loves. Out goes Dupond, in comes, who else, but Nilanjana herself. Not that she was ever really away from the action. The journey for her has begun all over again. Compared to the rhetorical, documentary-like Lajja, French Lover is an evolved creation. It’s much better written. Very empathetically translated too, from Bengali by Sreejata Guha.

My problem with the novel though is that Nasrin is unable to see the universe of her characters as anything but a battle place of the genders. And this is done almost as a convention, with little insight. Nasrin’s world vision is so limited, her heroine is constantly mistaking politics for poetry. The kind of error you tend to make when you see a dick or worse where a face is.

Blimps On The Radar