Bharat Ratna for Sachin Tendulkar: arguments for and against 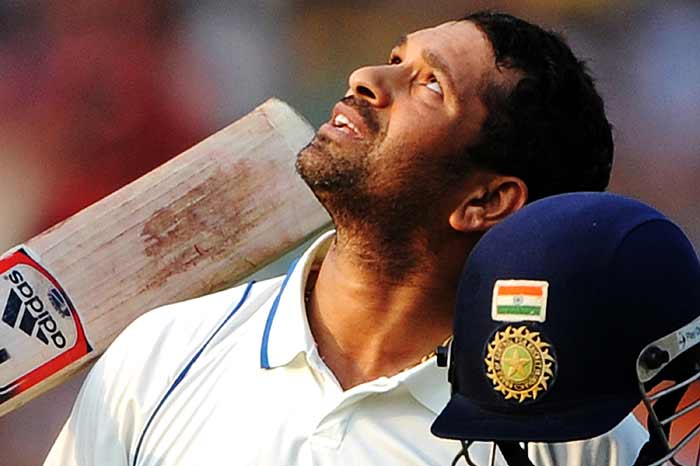 In Nagpur last week, in the last over during the desperate defeat to South Africa, Sachin Tendulkar ran in from the third man, swooped on the ball and hit the wicket with a direct throw. His fielding bared the spirit of Tendulkar. It’s made of iron and passion, forged by qualities increasingly  old-fashioned—discipline and respect for the game. A month before his 38th birthday, Tendulkar was quicker on the field than most teammates, diving around and throwing with a strong, unerring arm. He’d also made a dazzling century earlier in the day, taking the number of centuries he has hit in international cricket to 99—48 in One-day Internationals and 51 in Tests.

As he nears the astounding mark of 100, it’s an irony that the man who stands for every desirable value—perseverance, commitment to one’s job, grace under pressure, humility despite being lionised—isn’t eligible for the highest civilian award of the land, the Bharat Ratna. “He’s not taken one step wrong,” film-maker Shyam Benegal told Outlook. “He is disciplined, clean and embodies all the values that we tell youngsters they should inculcate.”

You are likely to wonder why Outlook has decided to spark off the ‘Bharat Ratna for Tendulkar’ campaign months before such awards are announced. Well, the reason is that the Indian state needs time to change the guidelines which state that the Bharat Ratna can be given only “for exceptional service towards advancement of Art, Literature and Science, and in recognition of Public Service of the highest order”. Sport is excluded. And therefore, Tendulkar too. Athletics legend Milkha Singh told Outlook, “Sportspersons should get the Bharat Ratna before politicians, for the former unite people and make them proud.”

Politicians have had a strong grip on the Bharat Ratna—they constitute 24 of the 41 winners, six of them prime ministers. Perhaps it’s time to bring sports into the ambit of the Bharat Ratna. And though it can be argued that hitting a cricket ball has no intrinsic value, Tendulkar, in a way, has done great service to India, giving the greatest joy to the greatest number. “The divide between what’s high and popular in art or culture isn’t valid anymore,” says social commentator Santosh Desai. “Why is sport acceptable for Padma Vibhushan but not for Bharat Ratna? This is the kind of thinking you had in the 1950s, when the Keskar regime (B.V. Keskar, minister for information and broadcasting) didn’t allow Hindi films songs on All India Radio.”

But change has been afoot. In 1992, 38 years after the first award, someone from the world of arts bagged it—Satyajit Ray. In 1988, actor-politician M.G. Ramachandran was awarded, but was cited for “public affairs”. In the 1990s, when 17 of the 41 awards were given away, the arts gained, with Bharat Ratnas announced for M.S. Subbulakshmi and Ravi Shankar. Curiously, in the 2000s, only arts have been rewarded, through Lata Mangeshkar, Ustad Bismillah Khan and Bhimsen Joshi.

Shashi Tharoor, politician and cricket-lover, says Tendulkar should be awarded the Bharat Ratna the moment he retires. “It’s India’s highest possible honour and is reserved for those who climb the pinnacle of achievement in their fields—whether politics (Jawaharlal Nehru) or economics (Amartya Sen),” Tharoor told Outlook. “Tendulkar’s accomplishments are of the very highest order and to quibble about whether cricket is an ‘art’ or a ‘science’ is as pointless as debating if Sen’s economics qualifies under the original terms of the award. Giving the Bharat Ratna is simply India’s way of saying, ‘We can’t imagine anyone better in your chosen field. Thank you for the joy and pride you have given us all’.”

Among the reasons cited to not give Tendulkar the award is his relative youth. Says former Indian captain M.A.K. Pataudi, “Most sportspersons retire in their youth. Their contribution to society subsequent to their sporting careers has to be evaluated. This applies to Tendulkar too.” His daughter, actress Soha Ali Khan, agrees, “They should wait until he retires and then evaluate. Only then he may be given it.”

It’s said the award is given late in people’s lives so that the character of recipients can be judged. Says historian Ramachandra Guha, “My wife, who is profoundly indifferent to cricket, thinks Sachin Tendulkar should get the Bharat Ratna because of the pure pleasure he has given millions of fans. Sportswriter Suresh Menon thinks that Vishy Anand deserves the Bharat Ratna as much as Sachin because chess, unlike cricket, is a properly world sport. I agree with both Menon and my wife, with this caveat—the award shouldn’t be given to either while they are active players, in fact it should be delayed till 10 or 15 years after their retirement, when we have a better chance to assess their careers, and equally importantly, their characters.”

Sachin, a quadtych of completion A man who’s “not taken one step wrong”.

It’s ridiculous to think Tendulkar’s 100 international centuries will diminish  in value in an assessment 15 years hence. And character, well, is a controversial area to stray into. With what certitude can we say that Indira Gandhi, a  recipient, possessed a strong moral character? Nor has the Bharat Ratna always been accorded to luminaries late in their lives. Take Amartya Sen, who obviously had a long career still ahead of him when he was decorated in 1999. Perhaps the state was spurred by a bigger award, the Nobel Prize, being given to him in 1998.

But there remains a question mark over whether service through sport is any service at all. Says Michael Ferreira, former world billiards champion, “I don’t think it should be given to sportspersons. Even Lata Mangeshkar and Bhimsen Joshi should not have been awarded. This award should be for a person who’s galvanised millions of people to do something.” Social theorist Ashis Nandy cites three reasons why the award should not be bestowed on Tendulkar or his ilk: “First, it will only endorse the capacity of the Indian state, the politicians and the bureaucrats, to judge sportspersons when they have already shown that they cannot judge even public service, arts, humanities and science. Second, it will further politicise Indian sports and turn the sportspersons towards greater sycophancy and kowtowing. And third, it will legitimise state awards in a society that has already used the awards to hierarchise scholars, writers, journalists, artists and performers.” Nandy feels all state honours should be abolished. “Neither the Indian state nor the Indian middle class—nor for that matter the Indian media—knows how to handle them.”

Yet, awards won’t go away, for they are grounded in populism. For Tendulkar to be the Bharat Ratna—which he already is, says Lata Mangeshkar—sport or cricket, part of the consciousness of a very large number of Indians, must enter the consciousness of the awards committee too. It’s happened with the arts over the last 20 years, perhaps it’ll happen with sport too.