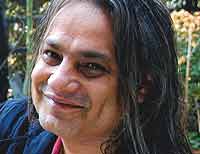 What's special about the Great Indian Rock Festival this year?
It's our 10th anniversary. We have three days in Delhi with15 Indian and three international bands and a one-dayer on February 25 in Mumbai.

How has the Indian rock scene changed in the last 10 years?
There is now a vibrant underground based on real music and not covers.

How original are the original compositions played at the show?
Indian bands are writing damn good songs, the content is original, but the form is still not distinct from western rock.

How much do the Great Indian Rock compilations sell?
40,000 copies.

Many talented rock musicians end up doing jingles and Bollywood. Any change in the trend?
Nopes.

Given the lack of encouragement from top music labels does Indian rock have a future?
Rock isn't going away in a hurry from the urban Indian culturescape. Will the labels survive the internet is perhaps a bigger question.

Do you foresee the rise of Hindi rock?
It's been talked about in the Indian rock fraternity but very few bands are embracing Hindi rock.

You're doing your bit for rock music. What else needs to be done?
Radio and television need to open up their programming to Indian bands a wee bit.

What's right and what's wrong with Indian rock?
A lot of passion, but no pudding.