Amid Mounting Anger Against CAA, A Political Alternative Is Taking Shape In Assam

The CAA has opened an old wound in Assam where the people who identify themselves as indigenous have been demanding deportation of all “illegal im­m­igrants”, irrespective of religion. 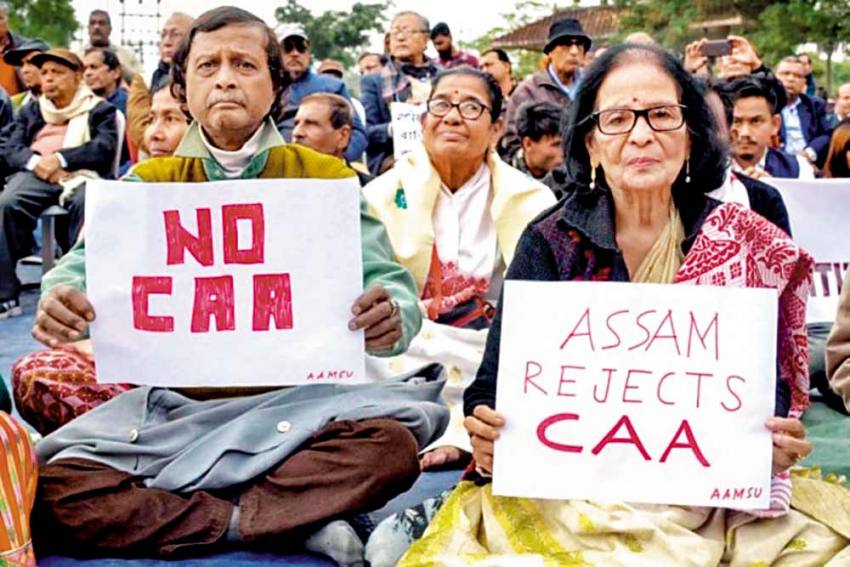 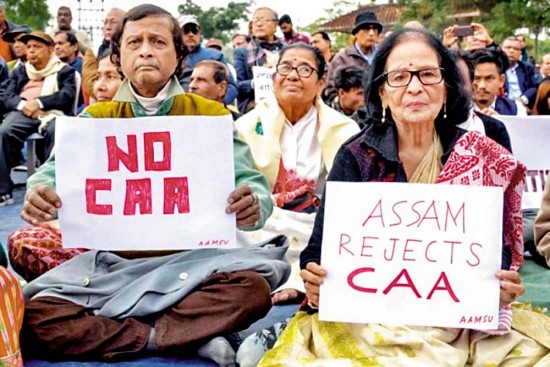 The traditional bonfires during Magh Bihu this year were fuelled by anger, the raging flames during the mid-January harvest festival turning into a metaphor for the underlying sentiments across Assam. Into the bonfires went copies of the Citizenship (Amendment) Act (CAA), the contentious legislation that has triggered mass protests across India, and left several people dead in police action. For weeks now, lakhs of people in Assam are on the streets, demanding scrapping of the legislation which allows “persecuted” non-Muslims from three neigbouring countries to become Indian citizens.

The CAA has split open an old wound in the state where the majority of the people, those who identify themselves as indigenous, have been demanding deportation of all “illegal migrants”, irrespective of religion. CAA, for those opposed to it, negates every gain made from the 1985 Assam Accord, signed after a six-year-long anti-foreigner agitation. The ruling BJP has tried to pacify the people, saying that not more than five lakh “persecuted Hindus” will gain from the act.  But Assam will have none of it. The BJP should have known better. For, it is this very issue—and Prime Minister Narendra Modi’s 2016 pre-poll promise of sending every “Bangladeshi” back home—which had helped the party win a strong mandate to rule the state.

And against this background of mounting anger, a new idea is taking shape—of a political alternative to the BJP, Congress and the Asom Gana Parishad (AGP), a party ironically born out of the anti-foreigner agitation. The AGP is now a BJP’s partner in the ruling alliance. “Due to continuous betrayal by political leaders and due to continuous injustice to the people of Assam, the people are discussing it (the need for a political alternative),” says Samujjal Bhattacharyya, the chief advisor of the All Assam Students’ Union, which is leading the anti-CAA movement, just like it had once spearheaded the Assam Agitation in 1979-85. Though the AASU is trying to keep its apolitical charter intact, a leader of a regional party says that the student body is very much part of “ongoing talks” among at least ten political outfits and several organisations on the possibility of a joint front against the BJP in next year’s assembly polls.

AASU general secretary Lurinjyoti Gogoi says the proposed alternative “won’t be born out of AASU or AJYCP (a youth body) but out of the sentiments, emotions, apprehensions and aspirations of the common people”. For the Assamese-speaking people, the biggest “apprehension” is loss of culture and identity due to the influx of “lakhs of Bangladeshis” though the number of illegal migrants in Assam has never been documented. Last year’s controversial exercise to update the National Register of Citizens (NRC) had left out 19 million people but organisations like the AASU had rejected the number of exclusions as “too less”. The ruling BJP had also rejected the NRC as “faulty” though it is believed that the party was worried by the large number of Hindus left out. This was unexpected for the party as it had estimated that the number of Muslim “illegal migrants” would be more. The CAA is expected to help the Hindus left out of the NRC.

“The RSS keeps saying, ‘one nation, one identity’. It does not work,” Lurinjyoti says, referring to the conflict between regional aspirations and the vision of a national party like the BJP. The student leader says ethnic organisations, student bodies, intellectuals and the artiste community will have talk to each other and take the lead for a political alternative.

Arup Borbora, a Gauhati High Court lawyer who is also the convener of a citizen forum, says they will likely host a conference in the coming months to announce a political party. The forum already has presence in 13 districts. “It is a historical necessity to have honest and uncompromising regional political party with an inclusive outlook, embracing all ethnic communities…” he says. Adip Kumar Phukan, a former journalist who leads a lesser-known regional party called Asom Sangrami Manch, says his outfit is ready to join “any new regional political force after discussions”.

Former chief minister and Congress leader Tarun Gogoi, too, has fanned the flames, even offering support to his successor Sarbananda Sonowal if he breaks away from the BJP. Known for his political acumen, the three-time CM says that the “alignment of the AGP with the BJP has created space (for a political party). There are a lot of people who are against this narrow-minded narrative of the BJP, who are neither with the Congress nor with the left parties… there are a lot of such people who want to unite and form some sort of a political party and how can they fight these forces”. Some believe that such an effort may not be enough to topple the BJP but could hurt it in the Brahmaputra Valley.

The idea for political alternatives is also afoot in neighbouring Tripura where Kirit Pradyot Manikya Deb Burman, the former Congress state unit president who quit the party, is leading the anti-CAA agitation. “There is a need for new leaders and no space for existing parties.” He hinted the state may see a new political party closer to the next assembly elections. The case of Tripura is often cited by nationalists of Assam as a classic case of “refugees turning into masters”, in the state the native Twiprasas are outnumbered by Bengali settlers who were forced to leave their homes in erstwhile East Pakistan and now Bangladesh. BJP leaders, however, say such worries are unfounded in Assam. A senior BJP leader says things will settle down in the next three to four months. “People are emotional. Once they see that the number of (Hindu) beneficiaries because of the new law is not too many they will understand,” he says.

Mrinal Talukdar, a political commentator has a word of caution for those working for a new political entity. He says the fight in Assam is anti-CAA and may not be essentially anti-BJP. “If a new political party has to emerge it will emerge organically,” he adds. Assam’s anti-CAA brigade may not have so much patience.