The story is as unconvincing as the bond that the ‘girlfriends’ are supposed to share. 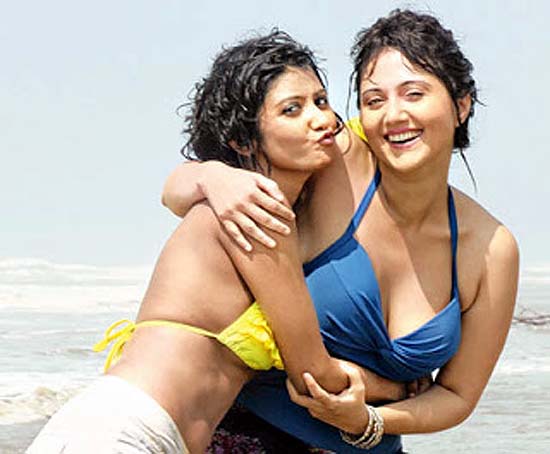 With Bedroom and Maach, Mishti and More, Mainak Bhaumik established himself as among the best of young Bengali directors with a rare abil­ity to depict changing values and its effect on modern relationships with abundant humour. His third in this same genre is a disappointment.

AAAG also explores disillusionment in love, dissa­tisfaction in marriage, dis­a­ppointment in relati­onships. Swastika, Raima and Parno are ind­epen­dent wor­king women with disastrous love lives. One is married to a man with erectile dysfunction. The other has been ditched three days before her wedding. The third just can’t figure out why her dates never call back. They are bosom buddies.

But other than this, it is not clear why AAAG has been touted as one about “female bonding”. A cav­eat—“sorry boys”—has ine­xplicably been issued to men at the end (as well as on promotional posters) that this is just not about them. Which is even more ironic, considering that the theme song is picturised in the classic “male gaze” format (heroines cavorting on the beach in bikinis). In fact, after the release of trailers AAAG was hauled to the censor and recertified as one with ‘adult content’. The attempt to make it a ‘girlfriends’ film has marred it, with stereotypes like ‘girly’ fun and frolicking and giggling comes across as fake. Though Bahumik shows a talent for sensitive observation, an eye for detail and a sense of humour, the story is as unconvincing as the bond that the ‘girlfriends’ are supposed to share.