Ambition Of The Vaulting Kind

The great Sensex spike is backed by reason, but grounded in hope. It might flatten out. 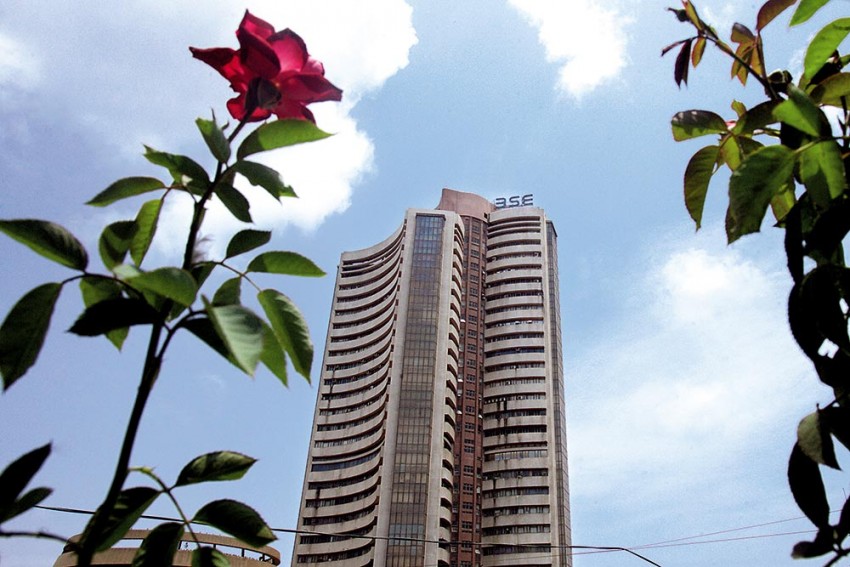 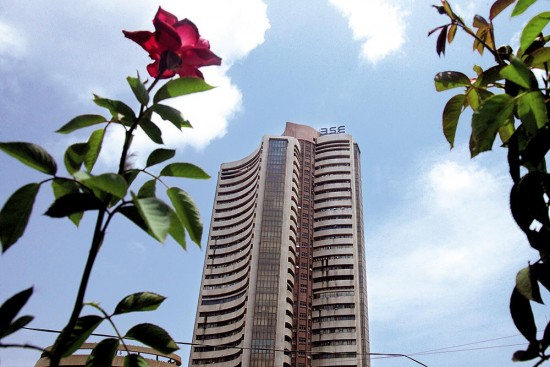 In the last couple of months or so, a few key developments have happened in India’s stock markets. First, the benchmark BSE Sensex has been on a gaining spree and has increased from 27,600 in January to within sniffing distance of a landmark 30,000 in April. Second, foreign institutional investors have invested more than Rs 30,000 crore in domestic equities. And, most importantly, the rallies at the markets have an important element that was missing from the markets in the past—domestic retail and mutual fund investors.

The prolonged, post-demonetisation bull run in the markets have not only market forces to thank, but also key factors in the economy and the political scene. Market sentiments are riding a remarkable crest of confidence in the government’s ability to ensure a stable political and economic situation for the foreseeable future.

A big trigger for such unabashed optimism in the markets was the Union Bud­­get 2017, which stood for fiscal disciple and inflation control. The budget annou­ncement of fiscal deficit control created an impression that fiscal consolidation was intact. Immediately after the Budget, the BSE Sensex rose by 486 points. That winning spree has not dipped since then; the benchmark index has been gaining steadily. It increased from a level of 27,655 in January to 28,743 in February after the Budget, and further to 29,620 in March, to over 29,900 now.

Analysts see a few other harbingers of hope. To begin with, the clearance of the GST bills by Parliament was an unequivocal signal that the government was serious about reforms. Along with this, other pending bills like taxation laws ame­­ndment, the National Commission for Backward classes Bill and the Nabard Bill are all radiating positive signs.

One key signal to investors has been the steady strengthening of the Indian Rupee against the Dollar over the last couple of months and the falling of oil prices, both of which have had a positive impact on the markets.

Last week, Union finance minister Arun Jaitley’s statement that India will record a GDP growth of 7.7 per cent in 2018 and that the country would need infrastructure worth over $600 billion have also triggered a rush in investments. 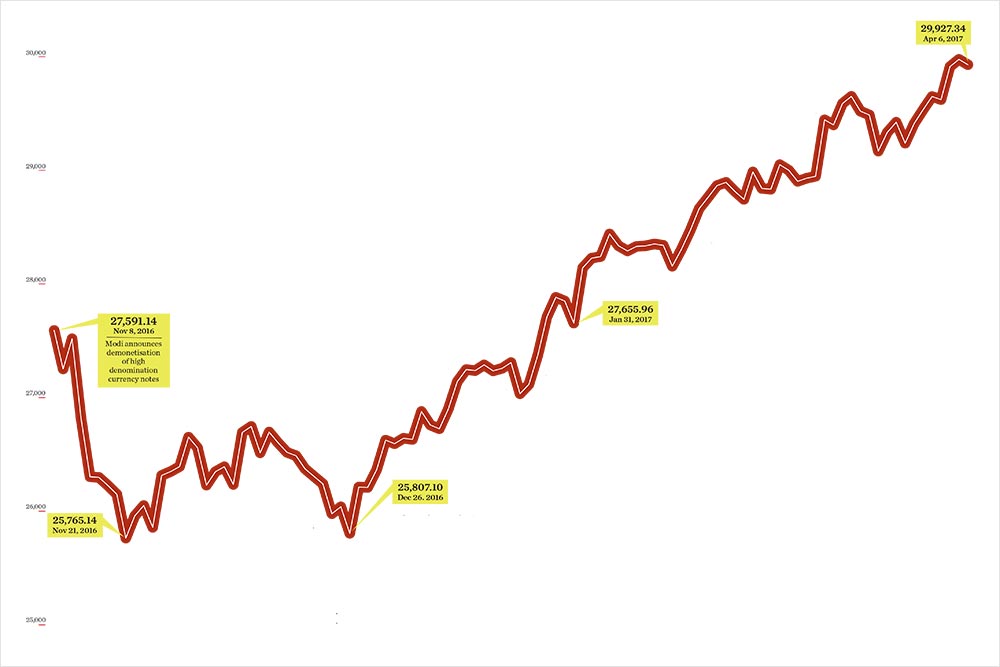 Graphic by Saji C.S.
For the first time, domestic investments are as great as FIIs—a broad-based rally of huge significance.

This is visible from the increased involvement of Foreign Institutional Investors (FIIs) and foreign portfolio investments into Indian markets. The first four months of this calendar year have been phenomenal as far as foreign investment is concerned; March has seen an exceptional amount of exposure of FIIs and portfolio investors have pumped in over Rs 31,300 crore into the stock markets.

Interestingly, for the first time, domestic investments are as significant as foreign money. About Rs 3,000-4,000 crore worth of domestic investment is pouring into the markets every month. This kind of a broad-based rally is unprecedented, which is pushing up the market levels.

Says Andrew Holland, CEO Avendus Capital Alternate Strategies, “Last year, with Brexit, all negatives were playing out. Then the markets rallied globally. The global growth has pushed emerging markets and India is part of that and investments are coming back. At the same time, there is a strong economy and monetary policies are working to some extent.”

On top of that, he says, the UP election verdict has given the government stability and a resolve to continue with the reforms process, indicating that the India story still holds promise. Ashvin Parekh, managing partner at Ashvin Parekh Advisory Services LLP, says, “What played on investors’ minds was the UP elections. Sentiments went up with the res­ults. Investors analysed the UP polls and saw political stability. The only aberration in investors’ minds was the selection of Yogi as CM.”

There are two views that investors hold of India. One, that India is primarily a domestic growth story and not one led by exports; and two, that India still stands out as a strong story and a safe haven for investments. So while FIIs have other places to invest, India still has weightage among emerging markets.

However, many experts feel that the markets are just being buoyed by lofty sentiments, that noteworthy reforms are over and there is nothing positive going forward. Says markets expert and founder of Capitalmind, Deepak Shenoy, “This is an irrational phase in the market and there is a disconnect between earnings and market expectations. It is only sentiment that is driving the market and though valuations are extremely high, sentiments are positive. Reforms are over, there are no more landmark reforms to push the markets. The next few months do not look rosy, as there are no significant things on earnings and fundamentals. But markets can remain disconnected for a long time and continue to be irrational.”

Optimism is also generated out of expectations of reforms and stability, despite the fact that no big-bang reforms have happened in the last year or so. Says stock market expert and CEO, Value Research, Dhirendra Kumar, “With the BJP government, there is an optimism in the air despite the lack of hard numbers showing growth. In the previous government, there was policy paralysis, now there is expectation of policy acceleration.”

He feels there was some action on the policy front in terms of removal of sub­sidies, especially the petroleum subsidy, which gave the government an additional Rs 80,000 crore. At the same time, SEBI gave mutual funds the green signal to go to smaller towns. This changed the investment scenario significantly. Ear­lier, almost 75 per cent of mutual fund investments came from the top 15 cities. That has changed now and mutual funds are attracting money from sma­ller cities, much of which is going into the stock market.

However, the biggest reform in the last two years—the much-touted GST—may not be beneficial for the markets, as it is expected to be disruptive. While it is a good long-term move, it may have short-term glitches in implementation, which might reflect in the stock markets. “GST is a short-term negative and will hurt. There will be a change in demand, as it will increase taxes for everybody. The first 2-2.5 years will be negative,” says Shenoy.

Will the market go higher than this and scale new heights? Most analysts are not so hopeful. “Markets will not go any more higher from here as there is no more catalyst to push it up further,” says Holland. Parekh also believes that the Sensex will remain between 30,000 and 31,000 till the year-end and will not go up any further, as there will be profit-taking.

This is also evident from the fact that valuations are very high in the Indian markets and companies have not started making money. The last round of company results were not that promising either. Moreover, monsoons, which were very good last year and improved market sentiments, are expected to be normal or below par this year, impacting the markets negatively.

For the bulk of the investors though, the present government has brought in stability and a resolve to press on with reforms. And that is enough for them to rally around and splurge on the markets. Theirs is a belief that the great Indian growth story has strong foundations.

A Child Isn’t Just A Number