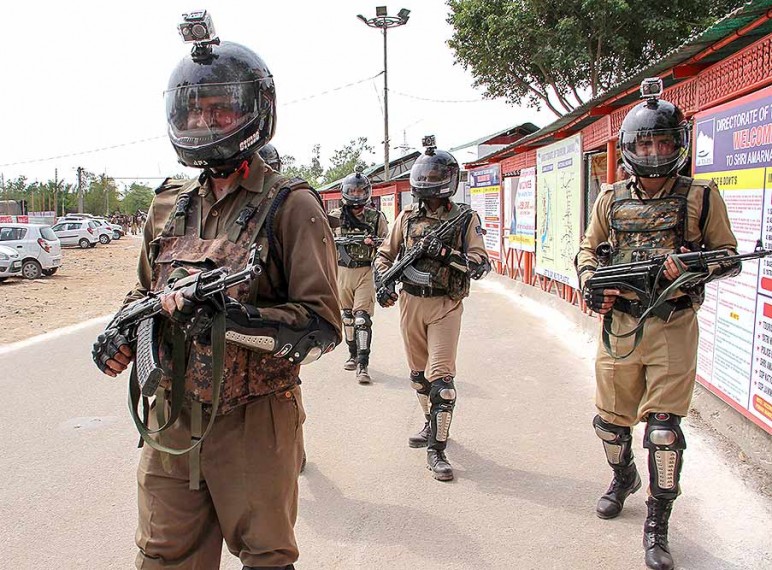 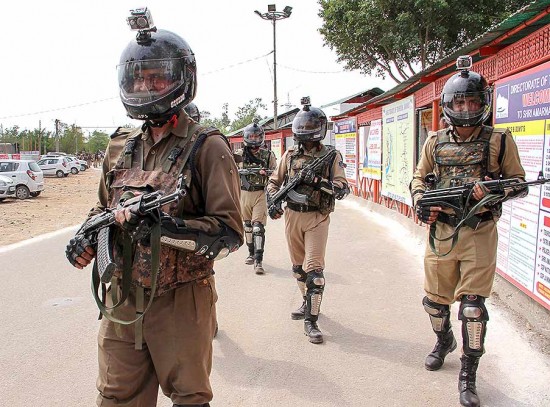 Soldiers with came­ras mounted on helm­ets and assault rifles slung from shoulders line up along the serp­entine road through the Valley. UAVs (unmanned aerial vehicles) whiz about, their cameras fixed on the road below, while more soldiers zip past on bikes. The road leads to the fabled Amar­nath temple, where Lord Shiva is believed to have revealed the secrets of life to his consort Parvati. ‘Security’ has been the buzz­word for the annual Amarnath Yatra in Kashmir ever since the armed insurgency broke out in Kashmir in 1989, but security arrangements for this year’s pilgrimage that began on June 27 is unp­recedented and mammoth.

Clearly, this is not about just a pilgrimage. It is also the BJP-led government at the Centre sending out a message to the party’s core voters ahead of the general elections next year. Coming just days after the BJP pulled out of its alliance with the PDP, accusing it of being “soft on terror”, this yatra is loaded with more than the usual dose of political symbolism. A common view among Kashmiri leaders is that the BJP is deliberately projecting the yatra as being under threat from militants so it can later claim credit for having ensured pilgrims’ safety by beefing up security.

Besides Kashmiri separatist and mai­nstream leaders, Hizbul Mujahideen commander Riyaz Naikoo too has ann­ounced that Amarnath pilgrims are “guests in Kashmir” and face no threat. Earlier, in a video widely circulated ahead of the 2016 yatra, the then Hizbul commander Burhan Wani said, “We have no plan and will never attack pilg­rims who arrive in Kashmir for Amarnath Yatra.” Burhan was killed by government forces barely a month later, on July 8, 2016, triggering a spate of violent protests that raged for months across the Valley.

An army officer said camera-fitted helmets have been provided only four days ago for the yatra route, especially the Srinagar-Anantnag highway where eight pilgrims were killed and nearly 20 wounded in a militant attack last year. Connected with a hub at a nearby army camp, the cameras provide live coverage of the area through which the personnel move. “Yesterday, we provided live rec­ording of a road accident to the police,” says a soldier.

Around 100 CCTV cameras with live web streaming have been installed on the traditional routes to the shrine loc­ated at an altitude of 13,000-feet. Vehicles carrying devotees have been fitted with radio-frequency identification tags, enabling security forces to keep track of their movements. Motorcycle squads will prev­ent yatra vehicles from str­aying from the main route.

The elite counter-terrorism force, National Security Guards (NSG), has also been deployed, to be flown to any place where they are needed. The personnel will also ­acc­ompany Z-plus category VVIPs to the cave shrine. The force was first ­deployed in the Valley in 1989, when the then home minister Mufti Moha­mmed Sayeed’s dau­ghter, Dr Rubaiya Sayeed, was held hostage by militants of the Jammu Kashmir Liberation Front. However, the NSG was not put to use and five imp­risoned Kashmiri mil­itants were set free instead to secure her release.

This year, when former top cop K. Vijay Kumar, advisor to Governor N.N. Vohra, said the threat perception to the yatra could not be taken lightly, Kashmiri leaders described it as a malicious campaign and a “calculated move aimed at mal­igning and discrediting a political struggle”. “People in Kashmir are continuing with the age-old tradition of providing the best hospitality to pilgrims,” says octogenarian Hurriyat leader Syed Ali Shah Geelani. “They have always been friendly and generous to visitors, especially to Amarnath pilgrims.”

Describing the pilgrimage as a “part of Kashmir’s ethos”, former minister and PDP leader Naeem Akhtar says “the best security to the yatra comes from this ethos”, though it was “violated by some mercenaries” who attacked the yatra last year. “Since 1990, the size of the yatra has been only increasing, and whenever any assistance was needed, Kashmiris were the first to come forward,” says Akhtar.

Ahead of the yatra, at Srinagar’s Raj Bhavan, army chief General Bipin Rawat briefed defence minister Nirmala Sitha­raman about the resum­ption of counter-­insurgency oper­ations in the Valley since the end of the Ramzan ceasefire.