It may not be official yet, but the signs are everywhere: Amar Singh is eclipsed 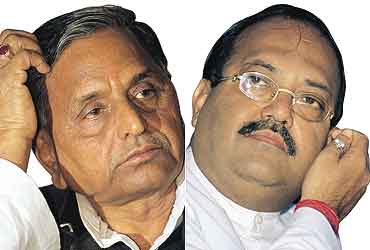 Look for that trademark Amar Singh swagger and bravado and you find it vaguely absent. In the flitting focus of Delhi’s strobe lights which can separate the has-beens from the arrived, Amar Singh appears, at least for the moment, to have rapidly receded into the former. With the UPA in power in Delhi, he now has to operate in a "hostile" environment. In Uttar Pradesh, it’s chief minister Mulayam Singh Yadav’s family that calls the shots, his activities have been severely curtailed. The CM’s younger brother, Shivpal Singh Yadav, now holds sway over the day-to-day administration. The CM’s son, Akhilesh Yadav, the articulate young MP from Kannauj, is being groomed for a bigger role. Cousin and Rajya Sabha MP Ramgopal Yadav continues to hold his own. And Shivpal and Akhilesh make no secret of their dislike for Amar Singh in party circles.

"I don’t throw parties anymore, I don’t attend parties and I don’t meet journalists at home," says Amar Singh, uncharacteristically downbeat. Is it because he’s no longer No. 2 in the SP? "That’s just Congress propaganda. In the SP, there is only one No. 1, no No. 2, 3, 4 or 5. Everyone is given the opportunity to perform and outperform the others. Mulayam Singhji is the umbrella." Then why do Akhilesh and Shivpal not like him? "That’s not true," he says. "Akhilesh touches my feet; Shivpal gives me a great deal of respect."