Tollywood reaches for a new planet, with a Rs 1 crore sci-fi flick 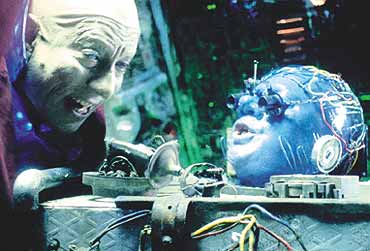 outlookindia.com
-0001-11-30T00:00:00+0553
Bengali filmmakers have always been hamstrung by a rather acute lack of money. Cutting corners on production values, most of them churn out indifferent, tacky commercial work. But with Patalghar—The Underground Chamber, a slick sci-fi film out in Calcutta theatres last week, Tollywood is getting an all-new flavour. "It seeks to provide total entertainment while attempting a number of firsts," says Arun Gourisaria, an FTII-trained film editor who runs Black Magic Motion Pictures, the ad film house behind Patalghar.

For one, it cost its producers over Rs 1 crore, the highest yet for a Bengali film, and has digital sound. Its hallucinatory visual flair is unlike anything that has ever been seen in Indian cinema. And it's sci-fi.

In a way, Patalghar's makers have succeeded in doing what Satyajit Ray couldn't with Alien, a screenplay he wrote in 1967 and eventually abandoned thanks to the machinations of Hollywood producers. Peter Sellers was interested in the lead role and Columbia Pictures had agreed to bankroll the film, but things did not work out. Ray later believed that Steven Spielberg's ET was filched from the mimeographed copies of the Alien script which remained at Columbia's offices.

Patalghar, based on noted Bengali novelist Shirshendu Mukherjee's eponymous story, is an Apu-meets-Goopy-Gyne-Bagha-Byne fantasy interspersed with a Batman and Robin tale. After all, debutant director Abhijit Choudhury is open about his admiration for Ray and his love for comics. Veteran actor Soumitra Chatterjee plays Aghor Sen, a 19th century eccentric scientist who, working on a rat-killing contraption, invents a machine that uses sound waves to kill humans. The fun starts when the machine is discovered 150 years later in the underground chamber of a village mansion, and all kinds of people, including an extra-terrestrial, compete to take control of the miracle.

"Detailed attention has been paid to the look of the film—it is a film with a sense of design, and its make-up is special," says producer Neeti Sonee Gourisaria. Make-up artist Vikram Gaekwad was flown in from Mumbai to work on characters like Vik, the bumbling extra-terrestrial from planet Nyapcha. Mita Vasisht as the evil Begum is the other Bollywood import. Innovations include creating Begum's palace from battered tin sheets and a broken chandelier, and a spaceship from painted thermacol and discarded hard disks!

Debojyoti Mishra's inventive music score bears Ray's orchestral overtones. Choudhury, who has till now made only ad films, says he had to "overcome his 30-second inhibition" to direct a film in which the music was as much part of the action as the actors. In the end, Patalghar works literally like a dream. Says Moinak Biswas of Jadavpur University's film studies department: "It's a film with a mimicry of Hollywood. But that doesn't overwhelm it. Instead, it allows it to retain its indigenous flavour."

Patalghar has already been lined up for this year's Brussels International Festival of Fantasy, Sci-Fi and Thriller Films and the Cairo International Childrens' Film Festival. But will it click with a movie-going public fed on mawkish family dramas? It will be a shame if it doesn't.