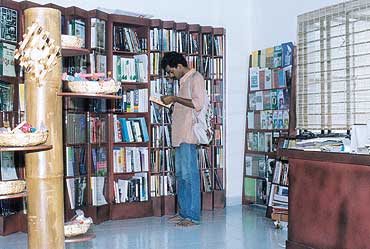 outlookindia.com
-0001-11-30T00:00:00+0553
Of the three intellectual influences on Kerala’s youth in the ’80s, two met with tragic ends. Paatabhedam, a progressive, radical Malayalam fortnightly, called it quits with its 120th edition, plagued by financial constraints. The second was John Abraham, a one-man movement whose only passion was making cinema for and by the people, and whose death Malayalees accepted with stunned disbelief. Both found little support during their time from the media or the masses. Joining these two conspicuous progressives, and the only one to have survived, were a bunch of like-minded youths concerned at the advent of modernity at the cost of flora and fauna—the single most important wealth of Malayalanadu. Traversing the length and breadth of Kerala, they visited colleges, schools and other institutions, most significantly the numerous libraries across the state, gathering support for their cause—protecting the environment. This went a long way in creating awareness, and laid the seeds for pressure groups that were to form later in this eco-sensitive state.

Alter Media, though it didn’t have the name then, was a motley group of unkempt but informed young enthusiasts who dipped into their own pockets and used the little resources available to them (some even sold ancestral property), to print and distribute newsletters and little magazines about the dark clouds of environmental degradation advancing on virgin Kerala—in the name of development, tourism and globalisation. Their activism brought them invitations from other such groups in the country and they began stepping out of Kerala to spread the message. Some of their notable work has been against the firing range in Baliapal, Orissa, and during the march to save the Western Ghats led by noted environmentalist Claude Alvares.

Alter Media was born at a campfire one November night in 1987. "It was suggested by Alvares himself," says C.B. Anilkumar, one of the visible arms of the organisation. "He asked us why we weren’t selling books—those that spoke about and showed ways to adopt successful alternate lifestyles." It was Alvares who lent them books on credit and spurred them on to sell these, going door-to-door in Kerala. "We were allowed a small commission to support our activities which kept us going," says Anil with a sense of pride. Moving door-to-door with books that didn’t make sense to common folk like the farmers, craftsmen and tribals wasn’t an easy job. Especially when there was the stigma of being extremists or ex-Naxalites attached.

From those early days, Alter Media’s transition has something symbolic attached to it—from nomad group to setting up shop in a dingy room on the third floor of Unity Building to the swank office inlaid with bamboo and terra cotta furnishings now in temple town Thrissur, in central Kerala. And they have done it all without any outside support, adamantly refusing help—both financial and intellectual—from the well-established, international bodies with similar objectives.

Between those days on the road and the current shop, Alter Media has spawned many writers, activists and NGOs, who now make a significant contribution to Kerala’s quest for a "sustainable balance". It has revived and propagated indigenous but highly scientific farming techniques, use of high-quality organic seeds and tapped widespread commercial possibilities in cottage industries based on tribal and folk art—all with ecology as the base. Their first publishing venture, the Malayalam translation of Masanobu Fukuoka’s The One Straw Revolution, is now in its fourth edition. As a result, Fukuoka is a name most farmers in Kerala swear by. As a publishing house, they have brought out six books in all, with Rain Harvesting by Shree Padre being the latest.

A significant role the bookhouse or "media organisation" has played is creating awareness about ecology and the creative ways in which it has campaigned—like holding study classes for children on boats going down a river, tracing its history and thus teaching them of its importance. Years from now, an ecological account of our times will perhaps mention their efforts too. An alternate history that will surely be printed on recycled paper. For more information: Alter Media, Brahmaswam Madam Building, M.G. Road, Thrissur-680001. Ph: 0487-422974; website: www.altermediaindia.com