The Jnanpith award can do little to upset the silent, internal spaces for Nirmal Verma 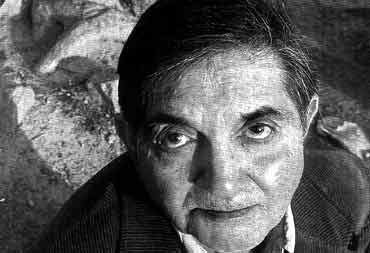 Mistaken, hilariously, both for an Eskimo and a Japanese, there is something sparrow-like about the renowned Hindi writer, Nirmal Verma: his diminutive frame, his tiny voice, his timorous friendliness. But that's as far as it goes. He has none of the sparrow's chatty squabbliness, none of its instinct for companionship or community. As a young boy in fact - the fifth out of eight children - Verma used to cocoon himself in from the boisterous tumble of life with his siblings by playing an unusual and solitary game. He would imagine death close at hand. Impending. Five minutes away. Then compelled by its urgency, he would try and remember all the things he held most dear - before dying. "It was just a morbid little game," laughs Verma, a trifle self-consciously. But at 71, those early preoccupations with death, memory and solitude still persist, shaping him as a writer and defining him as a man.

Meeting Verma amid the refined clutter of books and the material frugality of his crumbling barsati in Karol Bagh (he has only recently shifted to the relative plushness of a suburban Patparganj flat), one is struck by the curious mix of the affable and the aloof that makes up 'Nirmal Verma'. Despite the hospitable offers of coffee and food; the untiring conversation and self-effacing, old-world genteelness; despite the cigarettes and drinks and rounds of friends; the need to be "tortuously honest" as he puts it - there is something impenetrable about him. As Shiela Sandhu, erstwhile proprietor of Rajkamal Prakashan, who's published all of Verma's books, says, "I've been close to Nirmal for over 30 years, but I still don't know him. He knows everything about me, but I don't really know anything about him." The poetess and writer Gagan Gill - Verma's wife by a second marriage, 30 years younger than him, yet a kindred spirit if he has any - confirms that. "There are spaces in his head," says she, "that I'm not allowed to visit. Spaces, I think, he keeps closed even from himself."

But solitude is not merely a temperamental indulgence for Verma, it is the crucible of his creative imagination. With his very first book, Parinde (1959), a collection of short stories, Verma was hailed by critics as one of the leading architects of the 'Nayi Kahani' movement in Hindi literature. His inward eye; the play of memory; the contemplation of death - and the psychological exploration of human beings caught in a web of relationships-marked a significant departure from the dominant Premchand school of social realism. In Verma's work, personal conscience, existential questions and deep spiritual anxiety became the dramatis personae, replacing the oppressions of caste and plough that had dominated the Leftist Progressive Writers' Movement. Writers like Ismat Chughtai and Manto, who were part of the movement, did tackle introspective questions, much like Verma. But their work, unlike Verma's, was informed heavily by social concerns.

Verma's books - Lal Teen Ki Chhat, Ek Chithda Sukh, The World Elsewhere, Such a Big Yearning and Other Stories to name only a few - were not merely a departure. They triggered off a wave of experimental writing and ushered in a modernist sensibility.

"We live in a chaotic world of events," says Verma, "it is only in some blessed moments of self-reflection that one can see the connectedness of things, make some sense of the world." As one of his characters says in the story Jalti Jhari (The Burning Bush), "As long as we have our solitude to commune with, even when we're with others, then, in any real sense, we're not alone."

And so it is that even on the eve of receiving India's highest literary award - the Jnanpith - Verma sits amid a swirl of friends and congratulatory phone calls, unfailingly courteous, yet withdrawn in his contemplative cell. Inviolably other-worldly and private. Companionably alone. "Bada ajeeb laga," he said upon hearing about the announcement. "I thought such awards were meant for other people." An unmistakable flash of irony in his otherwise characteristic humility. Verma's stature in Hindi literature is undisputed; his corpus huge - five novels, eight short story collections and nine books of essays and travelogues. As poet and critic Ashok Vajpeyi says: "If I were to think of five great innovators of the fictional medium in Hindi, Verma would definitely be one of them." But, for leftist critics like Namvar Singh and Rajendra Yadav, this very innovativeness has marked Verma out as an 'outsider'. For them, his absorption with the inner landscapes of human beings rather than 'real' political or social contexts have been a betrayal of ideology; the foreign locales in many of his stories, a betrayal of geography.

Fresh out of a masters in history from St Stephen's College, Delhi, like many idealists of his generation, Verma started out as a Marxist. But deeply disillusioned by the Soviet invasion of Hungary in 1956, he renounced the Communist party. Three years later, he was invited by the Oriental Institute in Prague, Czechoslovakia, to translate modern Czech writers like Karel Capek, Jiri Fried, Joseph Skoversky, Milan Kundera and Bohumil Hrabal into Hindi.

The Czechoslovakia that Verma saw in the nine years that followed - the acute poverty, the intellectual censorship, the dishonesties of realpolitik - haunted him for years. Says he: "I went there as a socialist, but when I saw the deformities in a so-called socialist state, I was compelled to think of other alternatives for post-Independence India." That alternative slowly presented itself, less as a political model than as a liberal, humanist view; a literary vision shaped in huge measure by Verma's 'European experience.'

Travelling extensively through the US and Europe, Verma devoured writers and poets like Thomas Mann, William Faulkner, Rainer Maria Rilke, Virginia Woolf and Anton Chekov. They opened up worlds, a "depth of human experience", which Verma says, he would have otherwise remained unaware of. This period changed him definitively. As Vajpeyi says half in praise, half in mock hyperbole: "He gave up the politics of history for the politics of eternity."

True. It is the "politics of eternity", the great human questions which still absorb Verma. The idea of sacrificial death and rejuvenation. The figure of the redemptive Christ. The individual conscience. "I'm mystified by the question of how to apply all this to one's choices," says he. Subliminally perhaps, events in his own life have contributed to Verma's literary temper, compelled his spirit of inquiry. Verma's marriage with Bokul, an Indian doctor in Czechoslovakia, broke up when their daughter, Putul, was only three. Friends hazard-though they can't really know-that the episode, painful as it was, left many residues. Verma's fiction is full of dislocated characters who cannot connect-either with other characters or with their landscape. They are usually symbols of an essentially tragic human condition.

But it is not so much his complex interiorised worlds, as his superlative prose, his stature as a stylist that sets Verma apart as a master. Lyrical and resonant, a melancholic strain, a certain quality of ache imbues Verma's writing. As Sheila Sandhu says of his prose: "It's woven intricately." Rain, soggy leaves, elusive motes of light, shadowy worlds, the mountains of his childhood spent in Shimla-these make up the rich tapestry of Verma's fiction. There is nothing raucous about his writing; everything is understated, etherised into beauty. As long-time friend and journalist Mrinal Pande says of him: "Nirmal is mortified by crudeness."

> Catholic in his tastes, extremely well-read - "there can be," he says, "no untouchability in literature" - Nirmal Verma, in every sense of the word, is a self-fashioned man. His parents, he remembers with affection, had no intellectual pretensions. His father, an officer in the defence department of the British Indian government, was in fact, deeply dismayed by his son's literary ambitions. But Verma was lucky. He had a twin soul in his elder brother, the painter Ram Kumar, who first inspired Verma to write. They fed each other's creativity, and clung to their dreams.

Once deemed the 'outsider', chastised for examining his Indian characters in foreign places and conditions of exile, over the years, Verma has been making an interesting inward journey, towards a more traditionalist, Indocentric view of the world. "We have to decolonise our imagination," says he. "We can engage creatively with the West, exercise moral choice only when we are deeply rooted in and familiar with our own culture."

Ironically, Verma's traditionalist stance, his call for a reassessment of the past, his crusade for the revival of Hindi as a vehicle of intellectual thought, has fetched him fresh flak. Coinciding as this does with some political nuances of a right wing on the upswing, Verma's old opponents now accuse him of being a closet BJP man. But Verma resists cooption. To the disappointment of some, he may not ever have taken to the streets like Sartre, but he has always maintained an authentic moral voice. He has criticised Indira Gandhi's Emergency, voiced the cause of Tibet and defended Salman Rushdie's right to enter the country of his birth. That he has not been strident enough for some is more an expression of his shy personality than an indication of his moral courage.

In the final consensus, Verma presents to the world the quintessential integrity of being a writer. Refusing to be ensnarled, he has time and again declined top journalistic positions. Vajpeyi, who's been stung by his ire, stands affectionate testimony to that. When Gill married him, Verma had three plates to his name and no pillow. But cherishing his untrammelled space, and marching as he does to a different drum, Verma had made an elegance of penury.

Verma has held many chairs, received many prestigious awards. But as a character in his latest novel Antim Aranya says, "I've heard the word happiness, but I have never seen it." That sums up Nirmal Verma, the artist and the man for you.