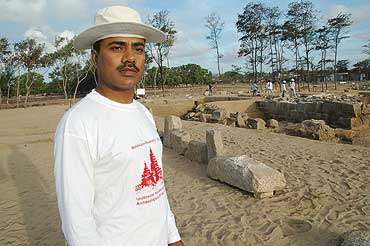 In the post-tsunami excitement of the discovery of ‘new’ ancient temples emerging around Tamil Nadu’s Mamallapuram coast, at least one person looked completely calm: Dr Alok Tripathi, who heads the ASI’s Underwater Archaeology Wing."We began work in the area in ’01 and these findings were slowly unfolding," he says.Otherwise, Tripathi is full of excitement about work."I wanted to be an archaeologist since I was in Class IV," he says.

Today, Tripathi is a professional diver with a passion for working on shipwrecks. He has directed excavations on the Princess Royal shipwreck off Bangaram Island in Lakshadweep, and dreams of working on a Bronze Age ship some day. India’s seawaters are rich with archaeological remains and Tripathi believes there is much to be unearthed. His work with other archaeologists and the Indian navy in TN’s Mamallapuram and Arikamedu, Gujarat’s Dwaraka, Maharashtra’s Elephanta and several other sites provide exciting insights into ancient sea-based commerce, sea-faring activities in our seas and changes over time in these coastal regions. Still, Tripathi believes many studies hinge too much on science, while "people are losing the magic of language, history, culture and the ancient arts".