All You Who Make Love To Mannequins

Illustration by Sorit
Meena Kandasamy December 26, 2011 00:00 IST All You Who Make Love To Mannequins

“Our bourgeois, not content with having wives and daughters of their proletarians at their disposal, not to speak of common prostitutes, take the greatest pleasure in seducing each other’s wives.”

Our bourgeois, not content with seducing each other’s wives, not to speak of bragging about these and other conquests through social media, also take the greatest pleasure in satisfying their collective voyeurism. This is where the modern sex survey steps in, with a magic potion in each of its multiple arms. As a potent cure for curiosity, it unabashedly tabulates everything: appetites and aphrodisiacs, flings and fake orgasms, incest and infidelities, pornography and partner-swapping, therapies and techniques, turn-ons and turn-offs, sexual positions and satisfaction, virginity and virility. The text is racy, the figures are voluptuous, and the accompanying photographs are, for the lack of a better word, helpful. This way, the elite urban consumer learns about the latest aspirational standards in love-making. He is transported to a realm where men are the only ones who can fantasise about fantasy, and women are mostly subdued into passivity, defined on sexual terms and packaged as commodities on the sex market.

Such a survey targeting the elite is only the tip of the frigid iceberg called capitalism. Since it revolves around demand creation and making even the worthless count, sex is simplified and quantified in order to aid sales. In these surveys, every salacious experience is laid threadbare. Power here flows from potency. The necessity to remain sexually industrious immediately reminds us of the old binary from the Kamasutra: the elephant-cow woman and the bull-man, both of them riddled with ceaseless, untiring desire. Unfortunately, these prescriptions have not become outdated. For sophisticated urban men from the upper middle classes, they preach an arrogance-ridden business masculinity that places maximum emphasis on material success. Women are told to capitalise upon every erotic aspect of their bodies because sexual attractiveness is a personal asset that offers mobility.

It has also become mandatory for these findings to take refuge in easy simplicities: a recent nationwide survey seemed to discover a direct correlation between more women in the workplace and extra-marital affairs. Another sex-survey special issue carried expert advice on how to catch a man for a one-night stand. This inculcation and normalisation of the stereotype of a sexually liberated woman desperately yearning for the zipless you-know-what is another corporate creation that only manifests male supremacy and female subjugation.

In the harsh eyes of this world, the judgement is out there. The woman who craves is the woman who is condemned. In the words of the Manusmriti, “Women do not care for beauty, nor is their attention fixed on age; thinking that it is enough if he is a man, they give themselves.”

Without decrying sex without strings and with all due respect to the right of individuals to determine their private lives, one needs to understand that the promotion of this licentiousness serves the material interests of the ruling classes. Those who advocate such a de-moralising of society have no tolerance to declass and decaste it.

Such a reiteration and celebration of women’s sexual freedom is an absolutely apolitical project. The nude woman in a corporate advertisement may appear to be the strongest one you have ever seen, but she is not going to step out of that page and smash the shackles of sexual oppression. Perhaps she cannot speak at all, not even to save herself. It is merely a corporate appropriation of the feminist notion of freedom that does not envisage any social change. Sex and the City and its many clones may be about lusty and liberated women but they do not have a single care about the rest of the world.

Sex and the City and its many clones talk about the lusty, liberated woman, who don’t have a care for the rest of the world.

As a poet writing extensively about the politics of the body, I don’t grudge the carnivalisation of the carnal. I don’t have a shred of belief in amorphous identities like ‘Indian culture’ that allegedly come under threat everyday. I understand that writing about sex itself becomes a weapon when one has to combat caste-Hindu patriarchy. Corporations cannot lay claim to the same freedom of expression and creativity that a writer needs. An artist can, at best, make a statement. Capitalism, on the other hand, conditions. Because of the political responsibility that comes from writing, I oppose the capitalist hetero-normative hedonism that flaunts openly exploitative relationships and causes the elite to believe that they are entitled to enjoyment. In my opinion, global corporates resemble the merciless caste structure enshrined in Hinduism, which is why it is a scary option in India today.

One cannot forget that there are casteist/feudal remnants among the urban elite. It may be the reason why sexual conquests are seen as a matter of pride and position. If one realises that we belong to a caste society that once demanded that untouchable women bare their breasts and not wear blouses, we’ll move closer to understanding the male gaze that predominates advertising today. 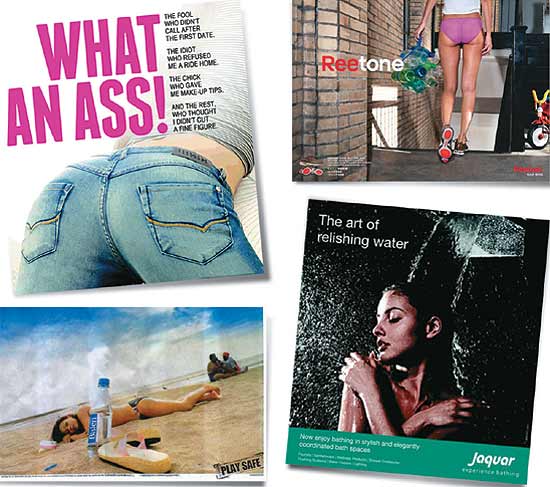 Can’t look away? Global advertising is fixed on the male gaze

The Kamasutra, as a highly disabled-unfriendly text, dispenses advice on how twice-born men ought to avoid marrying girls who have depressed noses or upturned nostrils, male body structures, crooked thighs, projecting foreheads, bald heads, or suffering from disfigurement in any manner such as being hump-backed, deformed or dwarfish. The aesthetics of the love that it advocates is oppressive and racist. The global corporates of today, and the unscrupulous media under their control, have sadly not advanced any further. The Kamasutra, or something similar, serves as their in-house style guide. It perpetuates these stereotypes, unmindful that this media-testosterone can cause feelings of inadequacy and inferiority in every woman.

The Bhagavad Gita, a Brahminic hegemonic text that rationalises killing in the name of dharma and caste in the name of karma, speaks of how the soul discards worn-out bodies and takes on new ones just as old clothes are abandoned in favour of fresh ones. Within the confines of a consumerist culture, such a transforming rebirth takes place in the here and now. Corporate advertising reinforces that perishable bodies are passe. Instead, the standardisation that corporations set in place indirectly force us to emulate these examples. People are made to map these contours on to their individual bodies. They are coerced into having fairer skin and slimmer bodies, and enticed to look young and stay fit and spend tonnes of money doing so.

Why do the sexual mores of the poor not attract such careful study or seasonal surveys? It is not just because they have no purchasing power. Whether it is the 3rd century Kamasutra that chronicles the sex lives of ‘upper’ caste Hindu men or the 21st century sex survey that seeks to replicate it on a national level, there is a clear exclusion of labouring bodies. Sweat and squalor don’t lend themselves to sensuality. One cannot address the masculinities/feminisms of the oppressed without considering the miserable living conditions under which they are forced to exist. Even if one courageously sets out to do such a survey among the proletariat, state apathy will stare us in the face at every turn we take. Everything is a political question: handsome is a state of health; privacy is finding a place to lie down for the night. Sex here is not a leisure activity indicative of libido, but one of the ways in which men and women come to terms with their anger with the world, one of the ways in which they find the love to heal themselves.

To imagine sex to be nothing but obscene enjoyment, and to perpetuate the image that it is the preserve of the ruling classes, points to wilful ignorance and a paralysis of ability to understand the corporate hardsell behind such celebration.

In the pursuit of pleasure, the urban elite have all the freedom in the world to run after the elixir of youth and make love-making their big obsession. But if anyone thinks of the horrors that follow when the tyranny of the market enters the bedroom, they will shed their political coyness before climbing into bed.