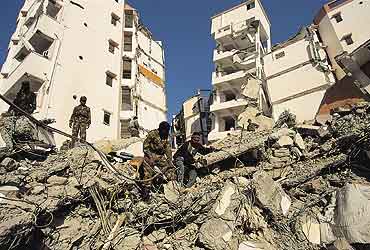 outlookindia.com
-0001-11-30T00:00:00+0553
When Kendrapara district collector Hemant Sharma needed 170 extra boats to rescue victims during the recent floods in Orissa, help was the proverbial click-of-a-mouse away. Using the India Disaster Resource Network (IDRN), an initiative of the ministry of home affairs and the UNDP, Sharma was not only able to locate the nearest district outside the state that had rescue boats to spare, but also place an immediate request for their despatch. Within two days, spare boats—inflatable, fibreglass-bottomed or motor-operated—from Visakhapatnam arrived at the official's doorstep. "During the 2001 floods, it took us five days just to locate spare boats, forget launching any additional rescue operations," says Sharma.

The IDRN, on a trial run since July this year and formally launched last month, is an online database containing a comprehensive inventory of the country's disaster relief equipment. Given the frequency of India's natural disasters, whether they are floods, cyclones or earthquakes, it was an idea born out of necessity. The equipment that would be required in the event of man-made disasters, including nuclear explosions and biological or chemical warfare, too is listed. Explains S.K. Swamy, director of the home ministry's National Disaster Management division, "There was plenty of disaster equipment in the country, but no way of knowing where any of it is located or how best to transfer it to the scene of a disaster."

Supposed to be the world's first disaster management database on such a scale, the IDRN has been created and developed inexpensively by a team of in-house IT professionals at UNDP. The IDRN works under the UNDP-GoI Disaster Risk Management Programme which was set up two years ago with a corpus of $34 million.

The IDRN has come up as a response to criticism that India's attitude towards disaster management has been akin to fire-fighting. Also, after 9/11, the threat of man-made disasters is now more real. As Saroj Kumar Jha, of the UNDP's Vulnerability Reduction and Sustainable Environment programme, says: "Having an inventory helps mobilise resources in advance in disaster-prone areas, and for disasters without early warning, it will reduce the response time taken." For example, it is hoped that states like Andhra and Orissa, which witness yearly floods and cyclones, can prepare themselves better to respond to disasters if they have a ready source from which to locate equipment.

From gas-cutters and decontamination tablets to stretchers and walkie-talkie sets, the IDRN currently has a 44,650-item inventory. The resource is available to district collectors and state relief commissioners, since these officials are the "decision-makers" at the local level, says Jha. Though NGOs and international relief agencies are important partners in disaster management, access to the resource has been withheld from them for reasons of security and control.

In addition to equipment, the IDRN also contains information on transport links between cities and states, charting out the most efficient way to deliver emergency equipment. There are also details on activities like search-and-rescue operations, medical relief squads etc.

So far, about 390 districts in 20 states have uploaded their data on to IDRN. "The database is intended to cover the entire country but uploading so much information from the micro-level is a cumbersome process," says Sujit Mohanty, who developed the IDRN along with two colleagues from the UNDP. However, the process of setting up the database has been a participatory one, and state officials have sent in suggestions on what to include. For instance, trained elephants are regularly used in search-and-rescue operations in Assam, and there is a proposal to include this fact so that all the districts can use the service.

Once the IDRN is up and running in all the 595 districts of the country, the government hopes to rope in the private sector in building a bigger inventory of resources and improving the country's ability to mitigate disaster consequences.