Rahul Mahajan lived life on the fast lane. A crash was waiting to happen. 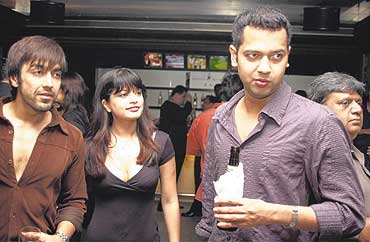 Rahul Mahajan represents the typical life of a privileged young man living off his father's wealth. At 31, Rahul has almost no career or work interests to occupy his time.

Almost a decade back, Pramod Mahajan had become close to an India manager of a well-known aircraft company. This gentleman helped Rahul into a flying school in Houston. He barely cleared the exams but papa secured him a pilot's job with Jet Airways. Rahul never really took to the rigours of flying and was never given independent charge of any flight. Soon he attempted television programming and later set up a software company.

On the personal front though, Rahul's life was more colourful. He was a party regular but only at select dos, hardly ever on Page 3. Insiders say he has passed out a couple of times at parties, and his father was well aware of his drug habit. Pramod Mahajan even put him into a detox and rehab programme about two years ago in London, after which the family believed that Rahul had reformed. The June 1 binge came as a shock to them.

Some regulars in the Mumbai party circuit have come out in Rahul's defence but their own credibility is suspect. Like the Provogue co-owner Salil Chaturvedi who declared that Rahul doesn't do drugs; Chaturvedi himself was in the police net last year over a drug scandal. Other party animals like model Payal Rohatgi reportedly stood up for Rahul's "good boy" traits while former actress Pooja Batra vouched that he was indeed a nice boy going through a rough time.