All The King's Men, And Greater Than All 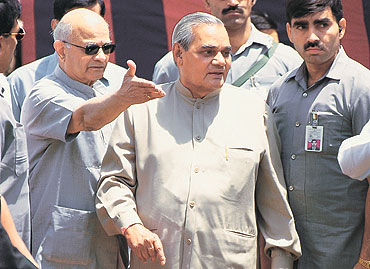 outlookindia.com
-0001-11-30T00:00:00+0553
Atal Behari Vajpayee is, of course, the ultimate Brahmin: in his six years in power, he displayed a perfect sense of political timing and succeeded in steering the first coalition government at the Centre to a full term. He clearly needed little political advice but he virtually left the running of the government to his alter ego, Brajesh Mishra: the joke was that Vajpayee only paid the occasional visit to South Block, preferring to work out of his office at his 7, Race Course residence.

A retired career diplomat and son of veteran Congressman Dwarka Prasad Mishra, Brajesh used to head the BJP’s foreign affairs cell till he made the transition to South Block as principal secretary, national security advisor, the special envoy to France for strategic dialogue and member of countless committees established by the prime minister. L.K. Advani may have been the number two in the BJP in the NDA years, but in many ways, the pugnacious and controversial Mishra, many felt, wielded more power. It is a different matter that the man has faded into obscurity yet again.

The Second Deck: Jack Be Nimble