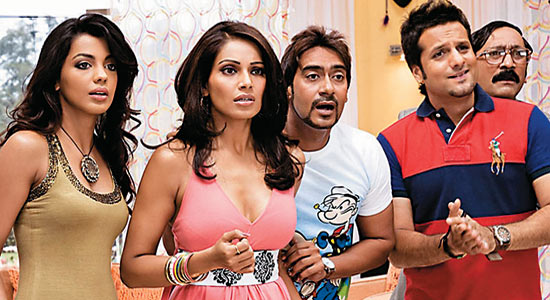 All The Best starts off slow and tedious. Much of the beginning goes in setting up a carnivalesque atmosphere by the sea, piling on one music-video-like forgettable song after another and taking us through deliriously colour-coordinated sets in shades of yellow and orange.ll The Best

And then the madness begins. The story is credited to a play, Right Bed Wrong Husband, by Neil and Caroline Schaffner. A struggling rock musician (Fardeen Khan) stays in a huge bungalow in Goa, living off the Rs 1 lakh pocket money provided by his generous half-brother Sanjay Dutt who for some mysterious reason doesn’t live in India and is prone to breaking the noses of people who lie to him. Now Fardeen is living a big lie himself. His brother assumes he’s married to Mugdha while he’s merely dating her. His buddy (Ajay Devgan) is a car racer and mechanic  who has a comely gym instructor (Bipasha Basu) for company.

Things come to a head when Dutt stops en route to Lesotho. What follows is a tale of confusion of identities with Dutt mistaking Bipasha for Mugdha. And then there is the dumb goon Johnny Lever who communicates by beating a spoon on the glass, which is then translated by a silly sidekick. Lever is chasing Fardeen for the money he owes him, a fact that needs to be kept hidden from Dutt. There’s still more that needs to be kept under wraps—a lottery winner (Sanjay Mishra) who Fardeen has sublet the mansion to.
Bollywood’s most successful contemporary comic filmmaker, Rohit Shetty doffs his hat to Hrishikesh Mukherjee’s Golmaal and Chupke Chupke in this film. But his humour is certainly not in the same league. It’s more about breathless action, slick one-liners and innuendoes.

Ajay Devgan’s painfully lean looks make way for some gym-toned muscles. Both he and Dutt seem to be enjoying their comic turn which gives the film much of its madness and energy. Fardeen does nothing much other than provide them support and Bipasha and Mugdha make for fetching wallpaper. Mishra brings the house down with his ‘chill’ routine and the references to the Rafi song Baharo phool barsao mera mehboob aaya hai is  hilarious.

1. Down (Jay Sean featuring Lil Wayne)
2. Party in the usa (Miley Cyrus)
3. Use Somebody (Kings of Leon)
4. You Belong With Me (Taylor Swift)
5. I Gotta Feeling (Black Eyed Peas)