Is the Sun TV affair the latest passage of play in the rivalry between Arun Jaitley and Rajnath Singh? 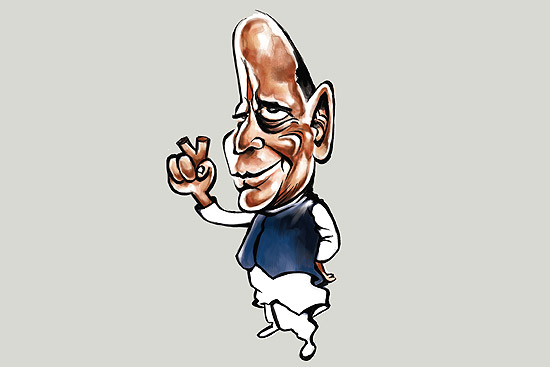 Astrologers have long played a stellar role in the life of Union home minister Rajnath Singh. One of them, it was said, had predicted he would be back as president of the BJP before the 2014 general elections. He was. One of them even said that if the BJP won, Rajnath would be...(never mind, he would not). So, just why the official No. 2 in Narendra Modi’s minimum government has suddenly turned his gaze away from the stars to Sun no one knows, but the hot money in the capital is that a nice little squabble is building up again between him and the unofficial No. 2, Union finance minister Arun Jaitley, who also holds the I&B portfolio, over the denial of security clearance to the Chennai-based TV network owned by the Marans.

Actually, the wily Thakur leader from Uttar Pradesh, a former chief minister of India’s most populous state, has pretty much been in the news from the earliest days of Modi Sarkar. First, word got around that, despite his seniority, the PM had not allowed him the luxury of choosing his own private secretary. Then, before the BJP government could celebrate its first 100 days in power, the Prime Minister’s Office and the BJP president had to both issue certificates of good conduct within hours after bazaar gossip that Rajnath’s politician-son Pankaj was involved in financial misconduct and that the premier had pulled up Rajnath, made it to the front pages of the capital’s newpapers. A Calcutta newspaper even reported that Rajnath had told Modi and RSS leaders that a ‘senior cabinet colleague’ had been planting stories against him.