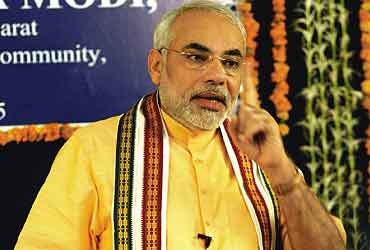 As far as the US government is concerned, Narendra Modi was the wrong man asking for a visa at the wrong time. Denying the Gujarat CM clearance to visit the country cost the US nothing. In fact, some in Washington thought it may have actually helped the government earn brownie points with local Muslim organisations. The decision, no doubt, was helped along by the fact that the BJP is now out of power in India. In other words, in the current American scheme of things, Narendra Modi is highly dispensable. He simply does not matter.

Ironically, the visa was refused by the self-same Bush administration which said little and did even less about the post-Godhra riots when they happened in 2002. What has changed between then and now? An unprecedented campaign mounted by secular Indian organisations determined to block the entry of a man indicted in the court of public opinion. Indeed, the Modi episode provides an instructive lesson on how effective lobby groups can be on Capitol Hill.

Such was the force of the campaign that American Express withdrew its $150,000 donation from the hotel convention where Modi was to appear, prompting some Modi supporters to destroy their credit cards. Prominent TV host Chris Matthews also had a sudden change of plans and declined to share the stage with Modi.

The US embassy in New Delhi had earlier on March 18 denied a diplomatic visa to Modi under Section 214(b) of the US Immigration and Nationality Act and revoked a business/visitor visa held by him under Section 212(a)(2)(G) of the same act which made any foreign government official who "was responsible for or directly carried out, at any time, particularly severe violations of religious freedom" ineligible. Strategically timed, the announcement came after Secretary of State Condoleezza Rice concluded her first visit to India. Clearly, the US did not want the controversy to dominate coverage of her India visit.

In the US, a coalition of secular, leftist and other groups was adamant that Modi's trip, ostensibly aimed at drumming up business in the United States, wouldn't materialise, or if it did, it would be drowned by loud protests and boycotts. The lead was taken by the Coalition Against Genocide (CAG), an umbrella of 38 groups comprising academics, civil libertarians and Hindu, Sikh, Christian and Muslim organisations who believe in a secular India. Organisers say they were careful to keep Arab, Pakistani and Bangladeshi groups at bay to avoid the all-too-easy allegation that the campaign was a Pakistani ploy. Hard negotiations ensued to persuade the Council on American-Islamic Relations (CAIR), the largest advocacy group of American Muslims, to stay out because of its overtly religious and controversial image. The idea was to maintain a largely secular profile for a more effective outreach.

Activists got wind of the invitation to Modi even before the Asian American Hotel Owners Association (AAHOA) announced on February 14 that it had invited the "lion" of Gujarat as the chief guest for its annual convention in Florida. The initial letter to Rice opposing Modi's visa was written by the Institute on Religion and Public Policy, one of the many bipartisan groups aimed at promoting religious harmony. But once CAG took up the issue, the campaign spread across the US via

e-mail and conference calls, thanks to the many South Asian academics at various universities. At the height of the month-long campaign, 60 to 70 e-mails were sent out daily and conference calls were made involving nearly 50 people across the US and Canada. More than 125 academics signed a letter to the State Department and to the foreign relations committees of both the House and the Senate.

Biju Mathew, a professor of business at Rutgers University and coordinator for CAG, has a specially keen antenna for Sangh Parivar activities in the US. As he saw it, secular Indians were determined to disrupt the organised effort by Modi supporters to restore his image by inviting him abroad and providing him with a platform. "Modi was to come to the US to spruce up his image. Instead, he now stands in a puddle of ignominy of his own creation," he told Outlook.

At the same time, it was decided early on not to boycott AAHOA hotels because many members are small operators who work 18-hour days to make ends meet. "They shouldn't be held responsible for the decision of the association leadership," Mathew said. Instead, CAG contacted Michigan Democrat John Conyers, dean of the Congressional Black Caucus and a strong defender of civil liberties, and many others on Capitol Hill. Conyers in turn roped in Congressman Joseph Pitts, a Republican of Pennsylvania and a member of the India Caucus, to introduce a resolution in the House of Representatives with bipartisan muscle. 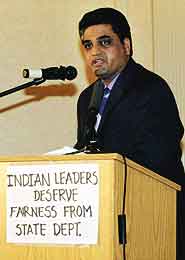 Pitts, a Christian hardliner, needed little prodding to join the campaign since he had been to Ahmedabad on a private visit last year and been briefed by local Christian and Muslim leaders on the violence they had faced. Conyers and Pitts sponsored a resolution asking the Bush administration to condemn "violations of religious freedom and to assist other governments in the promotion of the fundamental right to freedom of religion in India". In a separate letter signed by 21 other Congressmen, Pitts went into details of Modi's conduct and quoted the Indian Supreme Court which had called Modi a "modern-day Nero". He said the evidence was clear. "Mr Modi persecutes religious minorities in Gujarat. Our government should speak with one voice in condemning these policies and the actions of the Modi administration that have led to the death, torture and imprisonment of thousands in Gujarat." The letter from Congressmen and the CAG e-mail campaign created a clamour the state department could not possibly ignore.

But is it usual to deny visas to individuals? A US official admits it is rare but letters from Congressmen do get noticed. "A lot of bad guys get to visit the US, plenty of obnoxious characters. There are few legal bases for keeping people out," he said. But a combination of public pressure and political calculations resulted in the decision to bar Modi. Different bureaus of the state department were activated, including the human rights bureau which has reported on the Gujarat violence, the consular affairs bureau which adjudicates visa requests and the South Asia office. "In their collective wisdom, they came to an agreement; the secretary of state approved it," said the official.

But Rice, who met BJP president L.K. Advani last week, reportedly declined to give a clear answer when asked about Modi's visa. It appears, however, that she was aware of the decision and had supported it. Angela Aggeler, a spokeswoman for the consular affairs bureau, insisted the visa decision was "not a result of any petition or campaign" but was based on US law. "Visa issuance is not a popularity contest. We don't make our decisions on popular movements," she said. But she conceded that the state department "does not exist in a political vacuum". In the end, the Bush administration is keen to show it cares about Muslims.

Most analysts agree that Modi will be but a small hiccup in the steadily rising graph of Indo-US relations. Ambassador Ronen Sen said "our relationship is strong enough and resilient enough to overcome differences which arise from time to time". But he admitted that the Modi episode had heightened divisiveness within the Indian-American community and polarised people. In fact, the hotel association which invited Modi is now split with one section supporting the US decision and others getting ready to demonstrate outside the state department on March 30.

Angana Chatterji, a professor of anthropology in California and a CAG member, said to view the Modi episode as "anti-India" was to miss the point. "How is upholding religious freedom and accountability in governance anti-India? While the US continues to violate the rights of citizens in Iraq, Afghanistan and elsewhere, in this instance, its decision is supportive of human rights," she said. It's cause for celebration that Modi's involvement in crimes against humanity has been officially noted by Washington.