At 59, and a heart surgery later, this former Test star's passion for the willow game simply refuses to die 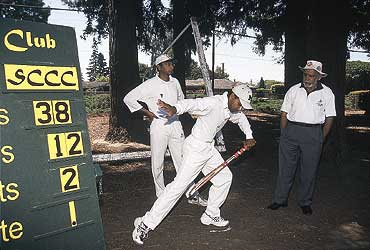 outlookindia.com
-0001-11-30T00:00:00+05:53
Two decades after quitting his job at the State Bank of Hyderabad and migrating to the US with his wife and son, Syed Abid Ali's passion for cricket remains undiminished. "I came to the US essentially to get my kids educated. I was a certified coach in India, but there were no cricket academies around in those days," says Ali, 59. But Ali's not regretting his decision now.

Even an open heart surgery in 1985 didn't deter him from chasing his passion—coaching. His efforts at promoting the game in the valley have now borne fruit—Ali is the US national team coach for the upcoming 24-nation icc tournament in Toronto.

Fondly called "Sir" by local players, age, Ali says, has got nothing to do with his passion for the game—he's seen more on the pitch than anywhere else, either offering tips to eager aspirants or simply chatting cricket.

His eyes twinkle with pride when he sees his son, 26-year old Syed Faaquer Ali (Sid for his friends), play the game. "Sid was six years old when we came to the US. None of his friends played cricket then. Frustrated, he started playing basketball and baseball." Sid changed his mind in 1996 and his father was only too happy to offer him the basic training. He later went to the National Cricket Academy in England to arm himself with a certificate. "Lot of people think he bowls like me. But his technique is better than mine when I was his age," says a proud father.

Ali says he's happy to be in the US because he still gets a chance to be involved in the game. "Minus cricket, I wouldn't have loved it here." He keeps in touch over phone and e-mail with old pals like Ajit Wadekar, Bishen Bedi, Kapil Dev, Sunil Gavaskar, Syed Kirmani, Bhagwat Chandrashekhar and Madan Lal. "My ultimate dream is to coach the Indian team," says Ali, who played his last Test game in 1974.