His Pakistani family got Mohajir-ised; he, over here, got marginalised. 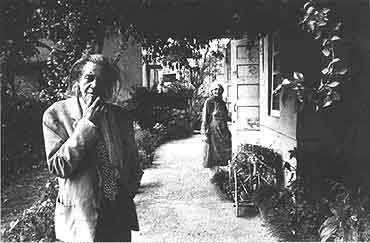 NO one expected anything more than a notional Partition. A lot of my Mends from Uttar Pradesh serving in the ICS shifted to Pakistan, firm in their belief that they could serve their tenure in this "backward" place that needed administrators and then come back to retire in Allahabad and Lucknow. At worst you expected a India-Nepal, US-Canada kind of situation. If I recall correctly, as late as early 1947, Nehru in a radio speech talked of the "possibility" of Partition and the "promise" of Independence. Gandhi's reaction: sarvanaash (disaster). Which is exactly what followed. The fury of those riots could have been mitigated had the announcement come a little less suddenly. Sultana and I didn't see much of the riots, barring a minor one at Saunders Road in Bombay but we did hear the horror stories about Delhi, Calcutta, Punjab.

Independence from the white man we did get but who was to free us from the animal in us? My mother's brother was hacked to death at Paharsir near Bharatpur. This, despite assurances of protection from the Bharatpur maharaja with whom the family had cordial relations. The rioters weren't locals. They came from elsewhere. Thirsty for the blood and belongings of their victims. I remember writing in the wake of those riots: "Maadre Hind ke chehrey pe udaasi hai wahi/Khanjar aazad hain seeney mein utarne ke liye/Aur maut aazad hai laashon pe guzarney ke liye." (Hindustan's face is sad, ravaged, still/ Daggers are poised to pierce hearts, still! And death's shadow waits to loom over dead bodies, still.)

And what of the country midwifed by these rioters? My family fled Paharsir to land in another ghetto: the Mohajir ghetto. Pariahised by the Pakistan they thought would be a haven. Mohajir problem? In a country whose founder (Jinnah), whose first prime minister (Liaquat Ali Khan), whose last dictator (Zia-ul-Haq) were all Mohajirs? Whose best known cultural export, Mehdi Hasan, is a Mohajir. Don't forget Pakistan was created in India. By Mohajirs: they agitated, they suffered, they uprooted themselves. Theirs was the politics, however flawed, that spawned a nation. Not the politics of the Sindhi, the Pathan, the Baluch, the Punjabi who was army recruit material for the British; who lacked political acumen.

As for India, the land of the BJP and Babri Maslid, I have only this to say. Nehru once said majority communalism is fascism. We would do well to remember that. The Partition is irrevocable. Despite our shared histories, this is one fact we'll have to reconcile to if we are to transcend an ugly past.