Journalist and first lady of the Mexican embassy on A Woman’s Wheel of Life, her newly published book featuring 30 pathbreaking Indian women. 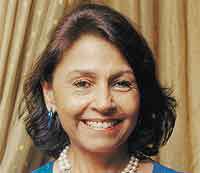 outlookindia.com
-0001-11-30T00:00:00+0553
How much did fellow diplomat Octavio Paz's writing influence you?
Tremendously. Paz has stirred all Mexican writers, poets and anyone who believes in democracy.

Did you plan the book before coming to India?
Yes, since the foreign media usually portrays a negative picture of India, I wanted to show its strength through women.

How did you choose 30 women 'pioneers' from such a vast female population?
I listed them from all walks of life and ages after speaking to many people. For instance, among actors I've included three generations by featuring Zohra Segal, Sharmila Tagore and Nandita Das.

Similarities between India and Mexico?
Both are male-dominated societies where family is the highest value and women are the value-givers.

Which aspect of women have you portrayed?
Their struggles and their shakti. That's why I included Amrita Pritam, Kiran Bedi and Brinda Karat.

Whom do you feel are the most liberated?
The matriarchs of Kerala.

Was language a barrier?
Yes. I'd wanted to speak to women in panchayats. But translation would've ruined spontaneity.

Any other difficulty?
No. Everyone opened their hearts and minds. It was like an encounter with lost friends.

Why did you author it in your maiden name?
That's a Mexican tradition. Whatever we do professionally, we do in our birth-names.

Whom do you hope to reach?
Men. I want all men who help and support their women to read my book.