For Bangalore, it's happy hours again, as a host of new pubs restore its jaded spirits 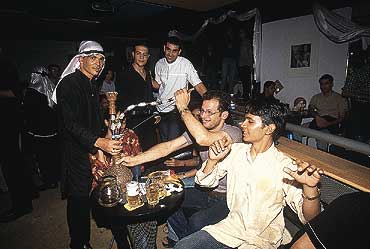 outlookindia.com
-0001-11-30T00:00:00+0553
Nudge your way through the shoulder-to-shoulder, butt-to-butt throng, and the ambience could well turn you dizzy: clothes draped tent-like from the centre, oriental objets d' art strewn around, sabres and armour hung on the wall. Parting the smoke and light-filled haze, men in flowing caftans, ghutra and kufiyyah (Arabian headwear) emerge to hand you a hookah.

Don't like this throwback to Sheherzade's Tales? Attend the 'Dracula's Ball', where masked men and women shimmying amidst eerie sfx—loud music, lasers and strobes—promise you a noir feel. Not quite your style? Pub hop to the next stop where you could be surrounded by men togged out like Greek warriors. Or a colourful horde of Govinda lookalikes.

Don't get it wrong. With 125 pubs, 33 wine taverns and 1,353 bars and restaurants, not for anything does Bangalore (population: seven million) have the reputation of "a city of a hundred pubs". Discotheques never really took off here, courtesy the government injunction not to serve liquor. With one disco for the entire city and police crackdowns on live bands at restaurants, it was pubs that provided happy hours for Bangaloreans since the mid-'80s.

As with all fads, however, novelty soon gave way to "sheer numbers and staleness", as Satish Bangalore, managing director of Phoenix Global Solutions and an inveterate pub crawler puts it. With the crowds receding, once-happening pubs like The Cellar, Cross-Roads, Time and Again, Epicures, The Oaken Cask, Black Cadillac and Underground shut shop.

Only for seven others to emerge this year alone, thus restoring the city's jaded spirits. "The new pubs," says fashion designer and pub aficionado Prasad Bidappa, "have given night life a shot in the arm. They reflect modern sensibilities." With theme dos—an event every weekday, be it rock, retro, hip-hop or trance, or during the weekend like an Arabian or an Afrikaaner night—good music and pleasing ambience, Bangaloreans of all age and class groups are returning in large numbers, with girlfriends, colleagues or spouses. "These pubs have given vitality, variety to night life here," says Bangalore, who counts 180 Proof among his favourites.

As does car-racing ace Narain Karthikeyan. Sipping a cocktail here on a noisy Saturday night, he rues: "We don't have anything like this at my place (Coimbatore) or in Chennai." Filmstars Akshay Kumar, Sunil Shetty and cricketer Yuvraj Singh are other out-of-towners who drop by in Bangalore pubs occasionally.

But mostly it's the techies who come here seeking an evening of easy camaraderie and relief from occupational stress. Comfort's the key, whether it's with the seating—some pubs even have bean bags—or gizmos like 'waiter hailing' switches alongside backlit menus on every table, like at Urban Edge. At Sparks, friendly waiters lead them to their favourite tables. S.J. Sen, 29, who works with an infotech company, has it right when he says: "Customer value seems to be the buzzword. Else, beer is beer is beer at these hangouts."

Easy pricing only adds to the comfort level. Targeting people with budgets of Rs 300-500 a couple, the new pubs offer a pint (two mugs) of draught beer for Rs 85, and a bottle of Kingfisher for Rs 100, working out at Rs 170 (two pints for a couple) plus snacks or Rs 200 (one bottle each) plus short eats. The cocktails come at Rs 175 to Rs 225 each. To keep away the stags on weekends, most pubs collect Rs 250 per couple as cover charge and adjust it against the booze cheque.Already, at least two of the new pubs are earning profits on investments of over a crore each.

If there is a glitch, it's with the timings—being allowed to remain open only from 11 am to 11.30 pm without a break. Most owners want the closing time extended by at least an hour. "The timings are not in keeping with the liberal image Bangalore's trying to portray," says Jay Singh, who owns 180 Proof with his wife Roshni Jaiswal. That isn't deterring anyone though: seven more theme pubs are reportedly planned at new hotels around the city. So if pub crawling be your mantra for life, make Bangalore your next port of call/crawl.