Dubai is where India's jetset are heading to tee, trip and tipple 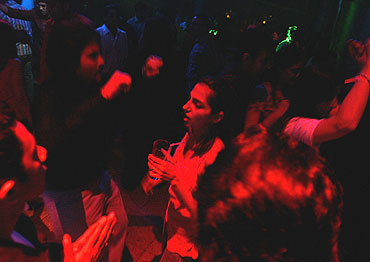 Sakshi Didwania of Mumbai wonders how she could have resisted the temptations of Dubai for as long as she did. Most of her friends had been there multiple times, considering it's barely three hours' flying time from Mumbai or Delhi. So, a couple of months ago, 23-year-old Didwania did what her friends do—visit the Favourite New Destination of swinging, urban Indians. She stayed for five nights, and can't wait to return.

When in Dubai, Didwania stayed in the tony Jumeirah district, waking up to stunning views of the Persian Gulf and the Burj Al Arab—the world's tallest hotel, where room rates start at $3,000 a night and go up to $50,000. Shaped like the sail of a dhow, the structure has a fibreglass atrium, a cantilever-held helipad (atop which Tiger Woods has teed off and Roger Federer and Andre Agassi have played tennis) and a Skyview Bar suspended 200 metres above sea level. Didwania recalls the Burj Al Arab as glorious both by day, and by night, when its fibreglass sail is bathed in colour-changing lights. 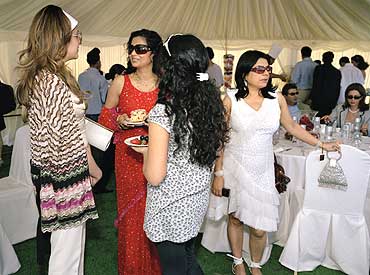 Away from Jumeirah, Didwania learnt to ski on the 400-metres-long indoor ski slopes at the Mall of the Emirates, boasting a stupendous 2,23,000 square metres of retail space and housing 400-odd retail outlets, including the high-end Harvey Nichols and the high-street Zara. Back in Jumeirah is the grandly opulent Madinat, a resort complex housing two boutique hotels, a shopping centre besides several eateries. Built like an ancient citadel, Madinat is dotted with elegant waterways. Malls in Dubai are open 12 hours daily during the week and longer on the weekends.

Dubai is a dream in the making, part of Sheikh Mohammed bin Rashid Al Maktoum's ambition to transform a once dusty little trading port into one of the world's biggest financial and tourist hubs. Hence its glitzy new districts, luxury villas aplenty, giant-sized malls, elaborate marinas and the upcoming metro. The Indian 'in' crowd is bang in the middle of this pulsating, throbbing megapolis, thronging its nightclubs, shopping for designer brands, playing and partying all night long.

Why Dubai? The answer comes from Pradeep Hirani, at the local outlet of the Kimaya boutique, which stocks contemporary Indian fashion. A Mumbai resident, Hirani is known in Dubai as someone who knows the rich, the famous, and those who're both rich and famous. Having brought many of his friends from Bollywood and beyond to Dubai, Hirani attributes the success of Dubai's "repeat factor" to "accessibility, accessibility, accessibility... it's close to India, and it offers everything that the London shopping and partying scene offers, without the depressing weather".

Shopping in Dubai is no longer about electronics and gold, though it is by no means extinct. Now the hunt is for Ermenegildo Zegna suits and Gucci shoes. Or a custom-made diamond and ruby-encrusted cellphone at the dazzling new Dubai Gold and Diamond Park. Says long-time Dubai resident and art gallery owner Malini Gulrajani, "For Indian celebrities, Dubai offers luxury of a different kind—the convenience of jumping on a plane just for someone's anniversary party or event, where they can let their hair down in relative privacy. And each time it's a completely different experience in terms of ambience, decor, food, shopping. And with all that, Dubai also has the comfort level of a Mumbai or a Delhi." 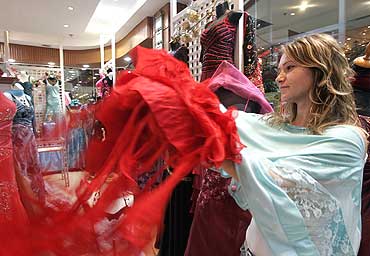 Getting wise to this Indian fascination with Dubai, airlines are starting new and more flights to Dubai. Earlier, even if Emirates Airline had four flights daily from Mumbai alone, it seemed to be fully booked all the time—especially on First and Business Class. This March, Jet Airways started flights to Dubai from Indian cities, while low-cost carrier Air Arabia included New Delhi as its 11th destination on the subcontinent.

Though trade and cultural ties between Dubai and the subcontinent go back a couple of centuries and the Malayali had long made Dubai his home, it wasn't until a cricket tournament began in neighbouring Sharjah that Dubai turned hot spot. With Sharjah being "dry" or alcohol-free since 1985, it meant that Dubai hosted the numerous post-match parties. A spate of lavish NRI weddings in the early years of the millennium did their bit to draw the attention of moneyed Indians to Dubai. And then, of course, there were news reports of Amitabh Bachchan, Anil Ambani and other close friends spending new year's eve in Dubai in 2003, further endorsing its appeal as a party destination. Now, it's not just billionaire Top 10-listers Lakshmi Mittal, K.P. Singh and the Brothers Ambani who are regular visitors here, Dubai's attractions are proving sufficient lure for the second rung of wealthy Indians as well.

And so hordes of halter-topped Hinglish-speaking women and their men now patronise bars such as the Dubai chapter of the Parisian Buddha Bar where a giant statue of a monk watches over the proceedings with unblinking eye and where a night out can cost upwards of $1,000 for a group of five. Nilesh K., who works in Mumbai's financial sector, has visited Dubai nine times since 2006. By combining two weekdays with one weekend, Nilesh manages to shop, trip and tipple to his heart's content. On a recent visit, he rented a Porsche Boxster, let the top down and cruised along the main arterial highway—known as Sheikh Zayed Road—that is lined with skyscrapers of different shapes and heights, including the iconic Emirates Towers, designed to look like folded palms. 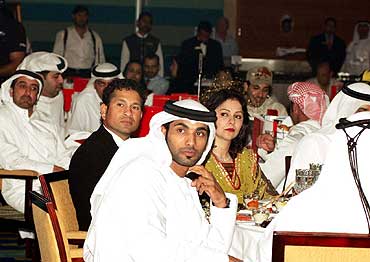 Celebspotting: Sachin and wife Anjali at a charity event at the Jumeirah Beach Hotel in Dubai

Nilesh lists the triple-level Trilogy nightclub as his favourite. Complete with daybeds and well-stocked bars, he says it was here that his dream of watching his international DJ gurus came true. Didwania concurs that the clubbing scene in Dubai is "fantastic! Much better than anywhere in India". Both Nilesh and Didwania admit to Indian celebrity-spotting at such clubs.

Signature restaurants of three-star Michelin chefs (and of Asha Bhonsle) aside, eating out in Dubai can be straight out of a gourmet's fantasies. You are ferried in a traditional abra or boat through manmade canals to your table at the Madinat's Thai eatery, or transported in a simulated submarine to the Burj al Arab hotel's al-Mahara restaurant, where you can feast on caviar and lobster even as leopard sharks and moray eels swim past you in a giant floor-to-ceiling saltwater tank.

Fine wining and dining do not translate into bawdy public behaviour, though. Dubai has a zero-tolerance policy towards violators of its laws on drugs and drunken driving, and visitors are mindful that Dubai authorities clearly expect them to respect local laws. But unlike other destinations in the region, say visiting Indians, Dubai's live-and-let-live attitude is what makes it attractive. The singles scene is hectic—and draws Indians on the prowl to sections of Dubai where, shall we say, professional women from various nationalities gather. "Where there's money and glamour, discreet soliciting does take place," says Delhi-based businessman Sunit Mathur. "But in Dubai you don't see women out soliciting on the streets."

Mathur is in Dubai for a different reason. Dubai's golf courses are bringing in groups of businessmen from Delhi, possibly hankering for a glimpse of Tiger Woods, who spends considerable time here. An 18-hole game at Dubai's golf courses costs anywhere from $100 upward, but Mathur can't seem to have enough. "I find it remarkable that there are at least five excellent fully green courses out in the desert," he says. 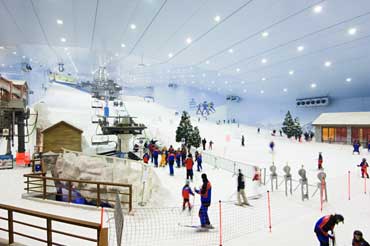 Cool spot: The world’s third largest indoor ski slope, 400 mts long and with 6,000 tonnes of snow, at Dubai’s Mall of the Emirates

The horse-racing circuit is another place for Indian celebspotting. Dubai's answer to Ascot and the world's richest horse race—the Dubai World Cup—is an annual event that takes place every March. It's the time and event when women wear hats, men dress smartly, there's no official betting and there's formidable socialising. Since the success of Mystical, bred by India's Zavary Poonawalla in the '07 racing season, Indian interest in Dubai's racing world has only heightened.

Finally, Indians are getting hooked to Dubai's burgeoning real estate market. With real estate prices escalating in Delhi and Mumbai, they are rushing to acquire freehold property in Dubai. While there are no official estimates of the number of Indians owning property here, all major developers say that Indians living in India make up a significant percentage of the buyers. They veer toward villas in communities styled like suburban America; they choose sea-facing apartments in Dubai Marina's skyscrapers and the flats in and around the Burj Dubai, now the tallest building in the world—almost twice as tall as New York's Empire State Building. They even buy up properties that aren't quite completed, such as the Palm, a series of man-made, palm tree-shaped islands on the Persian Gulf. "A number of the houses on the Palm were bought, sold and bought by Indians," says Harish Samtani, a real estate broker. Shahrukh Khan was reported in the local media to have acquired one.

Other fantastic housing developments are planned—one shaped like a map of the world, another like the universe. "Many Indians from India have bought studios and one-bedroom pads—to rent," says Samtani. "But the trend now is that they're acquiring upmarket properties as their own holiday homes—definitely not for renting."

In other words—they're planning to keep coming to Dubai, for more shopping, racing, clubbing, partying. Exactly the way Dubai wants it.