The film calls for a severe suspension of disbelief from whosoever dares to watch it. 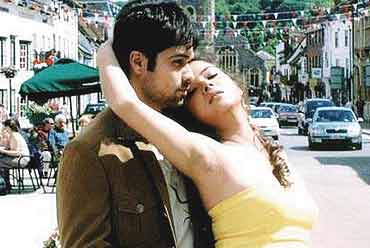 Aksar calls for a severe suspension of disbelief from whosoever dares to watch it. There were several questions it raised in my head.

Why and how does an utterly poker-faced man called Emraan Hashmi get to kiss so many women on screen? Blame it on the wicked ways of Bollywood. A man any sensible woman would want to stay miles away from wears the proud badge of the "serial kisser". Kissing is still a minor offence. How can the same impassive gent get to play hot-shot photographer Ricky who can take just about any woman to bed? Then there's the millionaire Rajveer (Dino Morea), a henpecked husband who wants Hashmi to have an affair with his wife so that he can file for divorce and dump her. Now why would his wife do that when she has a more kissable/beddable option in him? But then his wife is a strange creature too. Sheena (Udita Goswami) is perennially in a fit of rage, throwing vases and all. Clearly the most hardworking person in the unit must have been the AD in charge of shoving the vases strategically into the frame for her to fling them. So why does she get so angry ever so often? Shouldn't she be seeking therapy? And then why are her distasteful, asset-popping dresses dubbed "designer"? In fact, in one fit of rage, she snips a Versace gown: "To hell with Versace. Sheena Sippy jo pehnti hai wohi style hota hai." Really? If under normal circumstances she hates people intensely and irrationally, how does she fall for the hottie photographer so easily? Wonder of wonders, so does he. Which DVD did Anant Mahadevan get this apology of a script from? Why is everyone comparing it to film noir? And why should this film be called Aksar? Just because one inane line towards the end goes: Aisa aksar hota hai...

The only thing that you can't question is the nasal twang of Himesh Reshamiyya's pop anthem Jhalak Dikhlaja. Take a ride in an auto, look at the list of ringtone downloads or go to a night club. And you'll hear it: Ek baar aaja aaja aaja aaja aaaaajaaaaa.