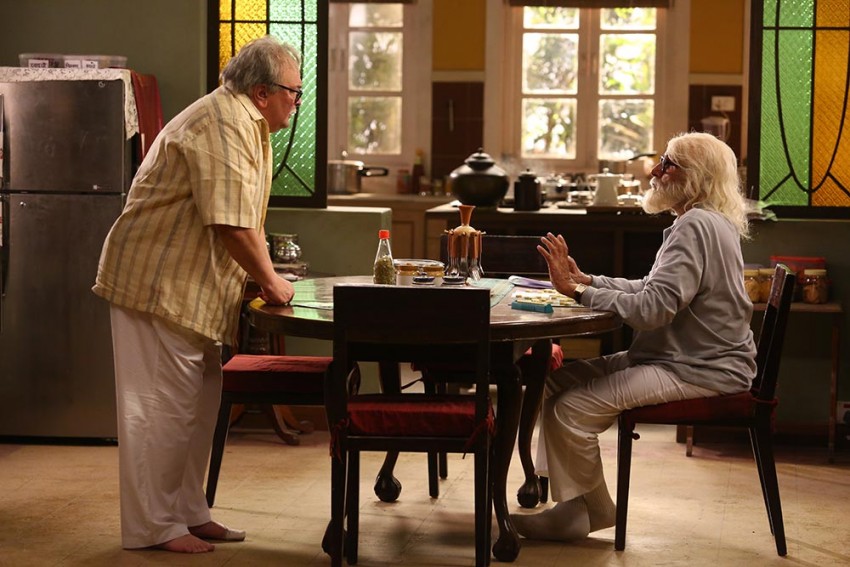 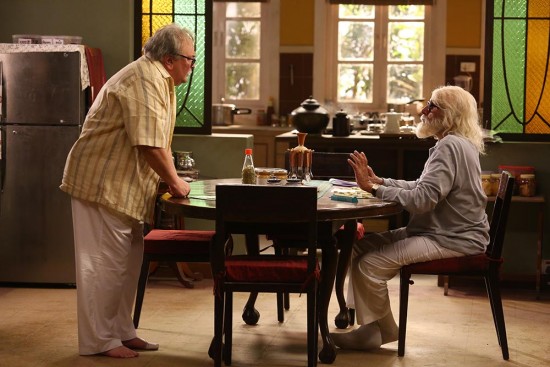 An industry perennially obs­e­ssed with youth since its inception, Bollywood has always put a shelf life on its stars. True, the ageism the Hindi film ind­ustry shows towards heroines is more blatant, with careers of alm­ost two generations of actresses fitting in a typical male star’s career span, but the industry’s heroes have also found themselves on the gloomy side of fame and business once the post-50 phase hits, and not for lack of trying. The industry’s reputation of being a veritable graveyard for aging actors, regardless of their talent or variety in repertoire, has only consolidated over the decades.

But things were changing too; around the turn of the millennium, a superstar who had fallen from the heights of fame stopped signing B-gradish actio­n-­romance kitsch opposite much younger actresses and let the greying take over. And there was indeed wisdom in it. Amitabh Bachchan rebranded himself like never ­before, reassuring fans, most of whom must have been ageing in equal measure, that old was perhaps ok...perhaps even cool. This was almost two decades ago, and Bachchan could have still passed on as the exception.

Now, a changed Bollywood landscape—wider in creative spectrum, with the new-age audiences having become more accepting of non-formula films—is beg­inning to look at the advancing years of a veteran artiste not as a liability but an asset. No longer is rhytidectomy (facelift surgery, if you please!) a default option to desperately elongate a sliding film career. Even A-list stars have no qualms in sporting grey stubbles and scriptwriters are complimenting the looks, writing roles for them, bef­itting their age and stature. It looks like as if the era of the geriatric is ­finally upon us.

Still in doubt? Next week’s eagerly awaited release is titled 102 Not Out, and they’re not talking cricket. Who else but Amitabh Bachchan plays the 102-year-old protagonist of the film and alongside him is another veteran actor who has been doing ‘old’ roles in films of late to well-deserved accolades. Rishi Kapoor is this other hero, playing a 75-year-old son to Bachchan. The film is based on a Gujarati play of the same name and directed by Umesh Shukla (of Oh My God! fame).

The return of these two legendary ­actors in a film after a gap of 27 years—Shashi Kapoor’s fantasy misadventure, Ajooba (1991), being their last outing— has generated quite a buzz not only for its casting coup but also for its unusual plot, being rightly promoted as an ­“ageless family comedy”. 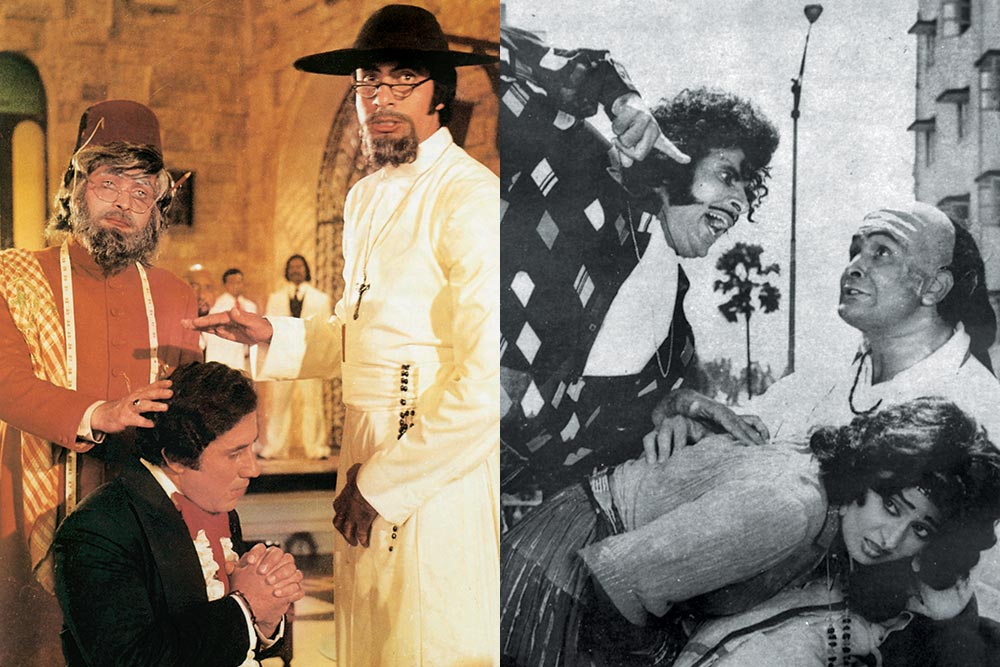 The duo in a still from Amar Akbar Anthony, Caricatures from Coolie

Bachchan and Kapoor form no ordinary combo, as they have done some memorable movies together, such as Kabhi Kabhie (1976), Amar Akbar Anthony (1977), Naseeb (1981) and Coolie (1983), after striking gold independently at the box office in the same year with Zanjeer and Bobby (1973) ­respectively. Going by their on-screen chemistry glimpsed in the promos of their latest film, it appears as if they have picked up the threads from where they had left years ago.

Big B and Kapoor are at the moment two of the busiest actors, probably as busy as they were at the height of their careers. But, as we know, it was certainly not always the case. Going back to that turn of the millennium, Bachchan is learnt to have approached filmmaker Yash Chopra for work before he was signed for Mohabbatein (2000). He has not looked back since, playing the ­elderly educator-patriarch in the film starring Shahrukh Khan and Aishwarya Rai in the lead. He went on to do many more such roles in movies like Baghban (2003), Baabul (2006), Cheeni Kam (2007), Black (2005), Dev (2004) and followed it up with his recent successes in Piku (2015) and Pink (2016), carving, in the process, a space for the aged star.

Kapoor, too, had stayed away from the limelight before he resumed his second innings in which he delivered knockout performances in movies like Do Dooni Chaar (2010), Agneepath (2012) and Kapoor & Sons (2016), where he played a nonagenarian to perfection. Rishi had dabbled in dire­ction after the lead roles dried up for him in the latter half of the nineties. But the box-office failure of Aa Ab Laut Chalen (1999), starring Rajesh Khan­n­a-Akshaye Khanna-Aishwarya Rai, put an end to his direction dreams and he returned to acting.

Aamir played a greying father in Dangal and Anil sports a grey beard in an upcoming film. ‘Old’ is ­becoming a trend.

Today, the success that Bachchan and Kapoor have found in playing their own age or an even older character underlines the fact that age has ceased to matter for a professionally sound actor in this era. But it took a while coming. Hollywood has always had aut­hor-backed roles for old actors. Back home, however, the industry has not been kind to senior actors, even the best ones. Barring Sanjay Khan’s Abdullah (1980), Raj Kapoor did not get any great role since he stopped playing the lead in the wake of the Mera Naam Joker (1968) fia­sco. Dev Anand tried to perpetuate his image of an evergreen, youthful hero by churning out dozens of movies under his own banner, but he could not deliver any genuine hit after Des Pardes (1978). Their illustrious contemporary, Dilip Kumar, considered by many to be the greatest-ever Indian actor, did a few notable movies such as Kranti, Shakti, Vidhaata and Mazdoor in the 1980s, and Saudagar in 1991, but even he had to hang up his boots before he turned 70.

The other popular heroes of their time fared worse. Shammi Kapoor, a rage in the 1960s, did character roles for more than two decades after his career as lead hero came to an end. Barring a Parvarish (1977) here and a Vidhaata (1983) there, he also did not play any role worth writing about in that stint. He too wielded the megaphone for films like Mano­ranjan (1974) and Bundal Baaz (1976), but his directorial ventures did not turn out to be money-spinners. 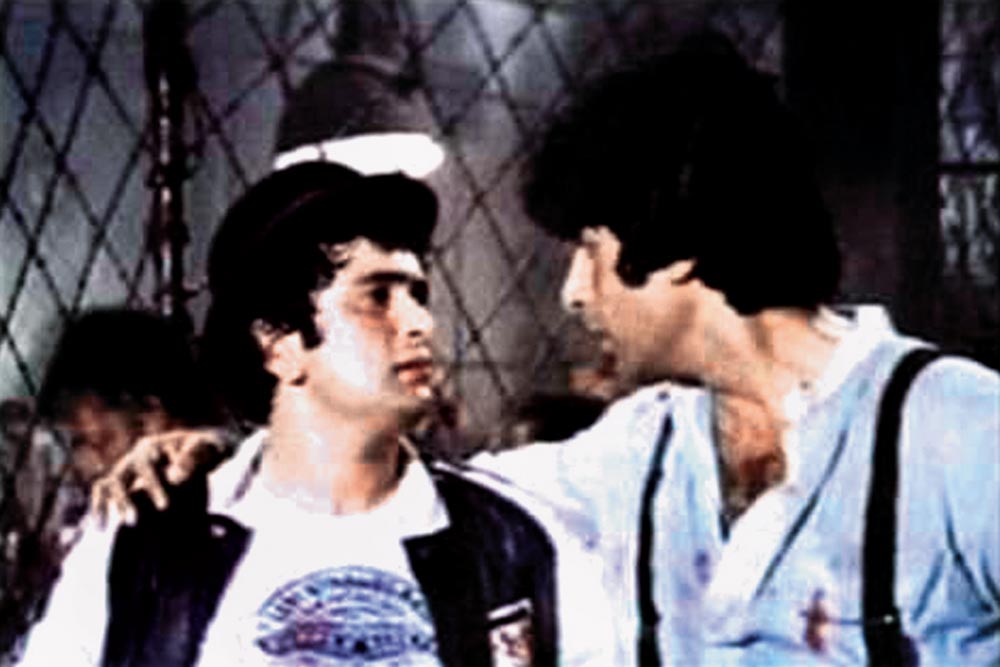 The duo in a still from Naseeb

Shammi’s younger sibling, the iconic Shashi Kapoor, had to play fatherly roles in a slew of eminently forgettable movies in the 1980s ­before calling it a day. Their contemporary, Manoj Kumar, also vanished after his ambitious Clerk (1989) bombed, and his comeback bid with K.C. Bokadia’s Maidan-e-Jung (1995) also failed to do achieve anything meaningful.

Among Bachchan’s contemporaries, Vinod Khanna did not get any good role in the later part of his career while Sha­trughan Sinha chose politics over films, appearing only occasionally in films like Rakta Charitra (2010) and Aan: Men At Work (2004). The good roles stopped for Jitendra too. Once he had to do daughter Ekta Kapoor’s Bhojpuri version of Sholay where he played the character of Thakur. Dharmendra, who otherwise had the longest run of the lot with a string of pop-kitsch action flicks till well past the ’90s, even as a sixtieish he-man, got a few good roles with Johny Gaddar (2007) and Life In A Metro (2007) in the new millennium but had to lean on his own banner to remain in circulation with movies like Apne (2007) and the Yamla Pagla series.

The older lot of leading men faced even bigger problems. In fact, Pradip Kumar and Bha­rat Bhushan, two of the jubilee stars of their time, had to turn smal­­l-time character actors in their old age before they died under pitiable circumstances.

Then there was the tendency of casting much younger actors for older roles, bypassing, ironically, illustrious actors of the same age as the characters. This effectively caused the ­you­nger actors to age quickly in the eyes of the audience. Sanjeev Kumar played an old man in so many movies when he was just in his thirties and forties. Mahesh Bhatt chose to cast Anupam Kher, then 28, to play a ret­ired man in the iconic Saa­ransh (1984), a role which was supposed to be enacted by Sanjeev earlier. Basu Chatt­erjee did make a rare Shaukeen (1982), which featured three old act­ors—Ashok Kumar, A.K. Hangal and Utpal Dutt—in central roles, but then, Mithun Chakravorty was also there as the stereotypical ‘young’ leading man. The 2014 remake of the film, The Shaukeens, had Kher, Annu Kapoor and Piyush Mishra reprising the roles of three lecherous oldies, but again, this film too had the younger Akshay Kumar, as if old men couldn’t hold a film.

Now, of course, the trend appears to have reversed. Let alone Bachchan and Kapoor who are playing a variety of central roles, even leading actors of the day do no fight shy of playing characters of old men. Aamir Khan played the fat­her of grown-up daughters in Dangal to rewrite box-office history while others like Sanjay Dutt, Akshay Kumar, Ajay Devgn and Irrfan are all playing roles suitable for their age. Anil Kapoor, who has somewhat appeared as an epitome of youth in the past in films, has sported a grey beard in his upcoming Race 3.

The primary reason for this trend is that the scripts of today themselves exh­ibit way more variety than was the case earlier—embedded in them, the characters also come to life in a different way. If the role dem­ands an old actor they would prefer to see a Bachchan or a Kapoor playing their age rather than a putting up with a younger actor trying desperately to look old with the help of prosthetics.

The Monsters At The Back