Is a shackled rupee politically correct and economically incorrect? 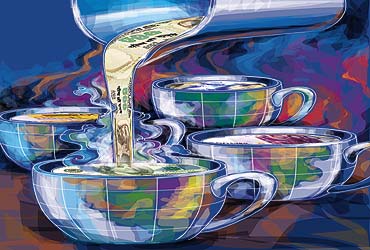 The RBI has 3 sets of reasons to delay full capital account convertibility:

It was the fastest major financial committee ever set up—just two days after the PM suggested it. Its report too was submitted in a record five months. But the second Tarapore committee—asked to examine if the time was ripe to make the rupee fully convertible—has raised more questions than it was mandated to answer. Going by current indications, Union finance minister P. Chidambaram's dream of attracting more FDI through a freer rupee is destined to remain just that. Even residents' hopes of getting more freedom to meet their forex needs is unlikely to be fulfilled soon.

At a macro level, the committee recommended that there was no hurry to opt for full convertibility, and set a five-year roadmap to achieve the status. Moreover, it spelled out several restrictions too. But most economists, including former RBI governors, seem unhappy with the Tarapore-II report. Some actually accuse it of regressing in terms of opening up the capital account, apart from being simply incremental, wishy-washy, bogged in minutiae and completely missing the big picture. Others say the convertibility timetable is too slow and cautious.

Experts consider that the committee's suggestion for a +Rs 5/-Rs 5 band for the rupee (real effective exchange rate, REER), inviting RBI intervention beyond this limit—is a "gift to speculators". Last, but not the least, two dissent notes—by S.S. Bhalla and A.V. Rajwade—question the report's need to be "politically correct" and "economically incorrect". In short: if it wasn't broke, why fix it?

Capital account convertibility has always been a sensitive issue. While the rupee became convertible in the current account in 1994, a roadmap towards capital convertibility came only with the first Tarapore committee report in 1997. Next year was the East Asian currency meltdown, which India and China more or less escaped because of their closed capital accounts. With Latin American nations too falling victim to currency volatility, Tarapore-I's three-year framework for full convertibility was presumed buried.

But the RBI, especially its then governor Bimal Jalan, continued to chip away at capital controls. Currently, residents can remit up to $25,000 a year, borrow up to $2,50,000 from relatives abroad, and hold foreign currency deposits worth $25,000 in a bank. Although none of these facilities have been used much, full convertibility will remove all controls on capital flow within and outside India. The new report only suggests gradual hikes in these limits over the next five years.

Still, the currency crisis inexorably shaped RBI's thinking on capital account, especially after Jagdish Bhagwati lauded India's far-sightedness and said "cease and desist from moving rapidly to full convertibility until you have gained political stability, economic prosperity and substantial macroeconomic expertise—and not just transparency and better banking supervision." Harvard's Dani Rodrik warned against increasing "systemic risk through contagion...", adding "it will leave economic policy in the typical emerging market hostage to the whims and fancies of two dozen or so country analysts in London, Frankfurt and New York." Even the originator of the Washington Consensus, John Williamson, said it'd be prudent for India to wait for 10 years. Former RBI governor S. Venkitaramanan supports Keynes who favoured "a move to current account convertibility, but not on capital account transactions". 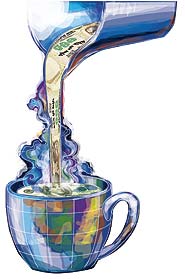 The RBI has set up a task force—to assess the doability of Tarapore-II recommendations—which will give its report by December 4. It's strange that the central bank did that so promptly even though the thinking within the bank and the government is to go slow on full convertibility. If there's no need to rush into it—which is what Tarapore-II is also saying—why set up a committee? While the Left parties are staunchly opposed to full convertibility, the finance ministry is "serious" about it; Chidambaram wanted to announce the committee in the last budget but felt it would overtake other fiscal issues.

To be fair, the RBI has good reasons to be wary. Tarapore-I had said that "fiscal consolidation, a mandated inflation target and strengthening of the financial system should be crucial preconditions/signposts." Even though inflation seems under control, the fiscal deficit is still above global standards and includes the crude oil price burden. Even the banking and financial system has far to go.

Add to this the growing RBI fears of the source and origin of private equity inflows, expressed in a dissent note to the Ashok Lahiri committee on foreign equity flows and repeated in Tarapore-II. Thus, there are many areas like FDI and FII limits, participatory notes, hedge funds, entry of subaccounts, ceiling on FII ownership of debt securities etc, where the RBI wants controls to continue. Like China which recently indicated that it'd go "step-by-step" to full convertibility by 2010 and "strengthen regulations governing cross-border flow of capital".

On the other hand, economists like Oxus Investments principal S.S. Bhalla, a committee member and a dissenter, Tata Group economic advisor Siddhartha Roy, or former MoF consultant Ajay Shah feel that systemic reforms can be concomitant with convertibility and there's no need to fix signposts as a precondition. Also the fears of capital flight could be a tad overblown, almost akin to fearing a run on the domestic banking system. Yet, by recommending a ban on P-notes and a band for the reer, they point out, the RBI itself is violating its own goals: inviting significant investment levels and ending currency management freedom. Bhalla in fact is in favour of a managed currency.

A study by Ajay Shah and Ila Patnaik shows that "FIIs are more like a stable source of equity capital than a capricious and unreliable bunch". Even an ex-RBI governor describes FIIs as operating on the basis of mutual trust. Says Bhalla: "I consider that maturity has something to do with experience. What we have instead is a babu mindset, disallowing money management in India and actually encouraging short-term debt. Both resident Indians and NRIs lose. India also loses Rs 5,000 crore in taxes."

Whether the RBI likes it, the pressures of short-term foreign flows are already upon us. Our stockmarket capitalisation is almost equivalent to our GDP. Short-term external debt is limited, still gross forex flows were 91 per cent of the GDP last year, and private agents can move 25 per cent of the GDP in and out of India at short notice. As economists, including the PM, point out, global and Indian economies have changed irrevocably since 1997 and the need is to ensure free and easy inflow of investments. As things stand, as long as the rupee is not a reserve currency and banks are not buying it instead of dollars, you and I have a long wait for the day when we needn't convert rupees into other currencies for a trip abroad.