The dictator's death is just one stride in the US' imperial plans. But the future now is boggier. 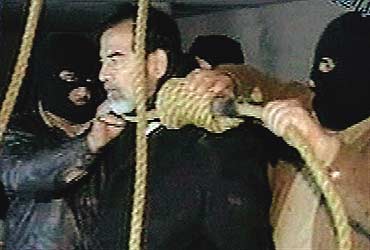 outlookindia.com
-0001-11-30T00:00:00+0553
The anger that seethed across the Middle East at the hanging of Saddam Hussein has lost none of its searing edge a fortnight after the dreaded tyrant kept his date with the hangman at dawn. At one level, a deep affront to religious sentiment, at another, resentment tinged with humiliation. Washington is now scrambling to distance itself from the backlash by seeking to lay the blame at Iraq's puppet president Nuri Al Maliki's door. But its disregard for sentiment and rule of law in sending a leader of Saddam's stature to the gallows after what was seen as a slapdash trial has divided the Arab world anew. The perceived anti-Sunni tilt of the move perturbed even as staunch an ally as Egyptian President Hosni Mubarak.

Saddam's hometown of Ajwa in Tikrit and the Shiite strongholds in Baghdad and in the south may not have strayed from the script. His supporters beat their chests in sorrow. The Shiite masses danced before TV crews. But in homes and coffee houses across Arab lands, it reinforced the sense of dishonour the US occupation has wrought in the once-proud Iraqi nation. It also begs the question, who's next?

In neighbouring Jordan in the early hours of December 30, as television screens showed live images of Saddam being led to the gallows, an Iraqi mother of two said she left the room rather than watch. "He was a tyrant, but I felt a sense of disbelief that America would execute their former ally this way—that too on the first day of Id Al Adha, on a day when no fighting or killing has been allowed among all Muslims for hundreds of years."

The woman, who wished to remain unnamed, is of the Shia faith, married to a Sunni and a Saddam supporter, in a mixed marriage that until the advent of American forces and the deepening sectarian divisions was an all-too-common practice in Iraq. "They didn't even let him complete the 'shahadat' (the Muslim profession of faith)," said the woman's husband, a former Baathist who was one of hundreds of thousands who fled Baghdad after murderous Shia gangs hunted their families down.

As grisly new footage of Saddam being hanged is posted on Iraqi websites, the revulsion felt by the Iraqi couple is shared by hundreds of thousands of Muslims, irrespective of their nationality. Dr Adnan Pachchachi, who was prime minister in pre-Saddam Iraq and is a Sunni, not only says "Nuri Al Maliki has done a disservice to all Iraqis, to all Arabs", he asks why there was such unseemly haste. Reflecting widely held sentiment, he said Saddam should have been jailed for life after being tried by an international court of justice. In death, he had become larger than life. "They've made him a martyr."

A Jordanian media analyst who requested anonymity said the answer to these questions lie in another set of questions: why was Saddam hanged only for the massacre in the Shia town of Dujail, not for far bigger crimes such as the gassing of Kurds in Halabja? "The answer is in the story not being told of American involvement in the supply of weapons—conventional, chemical and biological—to Saddam when he went to war against Iran and his own people. A Saddam alive would have spilled the beans."

Indeed, far from the triumphalism of the Shia and the trampling of Sunni sentiment within Iraq, the hanging has forced US allies and enemies alike to fast-track moves to consolidate their own interests. "The removal of Saddam from the picture is a message that the United States intends to stay. They have not come all this way to pack up and leave," the Jordanian analyst said. US President George W. Bush's so-called "surge", his plans to add 20,000 troops to the existing 1,30,000 is only a first step. There are three military bases that have already been built in Iraq since 2003 that can house 60-70,000 soldiers. More are planned.

"This is not as simplistic as it seems," said the analyst. Although oil in Iraq is far cheaper than it is anywhere in the Arab world—as little as $5 a barrel in Kirkuk—it's not just a fight for Iraq's oil but for control of the world's oil markets. It's not a battle, as the neo-cons have made out, to impose the first democracy in the Arab world, but to run a malleable government in Baghdad that serves US interests.

After dramatically reducing its presence in Saudi Arabia post-9/11, and to a lesser extent in Qatar and Bahrain, which sit across the narrow Strait of Hormuz from Iran, Iraq is intended to be the first staging post for American troops on land in West Asia. It gives the US the strategic space it needs to operate in the region. It keeps in check the rise of a pro-Iranian Shia regime in Iraq, blocks the feared Iran-Iraq-Syria axis, acts as a bulwark against Iranian outreach through Iraq to Syria and Lebanon and the final objective—Israel. "The US simply cannot allow the destabilisation of the frontline state of Jordan, the last stop before Israel."

Ordinary Arabs too believe that while neighbouring Iran is in every probability arming and funding Moqtada Al Sadr's Shiite Mahdi Army, the US' masterly inaction or inability to stop sectarian violence has played no small part in deliberately feeding the monstrous Sunni-Shia divide. Eventually it could lead to the trifurcation of Iraq. Some 12 million Kurds are already half-way there to their own mini-state in the north with its potential to destabilise Turkey, Syria and Iran. A pro-US Shiite state in Iraq's south will be a buffer against radical Iran and strengthen powerful Sunni states like Saudi Arabia, determined to support sagging Sunni morale after Saddam's departure while taking on the role of flag-bearer for a final settlement for the Palestinian people. "If the Middle East region continues to remain unstable, the major players will be unable to forge a consensus, independent of American strategic interests, making the US presence here all the more necessary," the analyst said.

The challenge facing Washington's allies in the Middle East like Jordan, Egypt and Saudi Arabia therefore is to ensure the botched tactics that resulted in the deeply hostile reaction to the hanging of Saddam on the Arab street does not jeopardise their own objective of checkmating the rise of Iran. Removing Saddam from the equation may have been politically expedient for the Bush administration, but the resultant anti-Sunni tilt, as perceived by the Arab street, has only complicated matters further. Saddam in jail, incommunicado, may have been better after all.