Home  »  Magazine  »  National  » Campaign March »  Ahead of Polls, Yatras, Dharnas And War Of Words In Andhra

Ahead of Polls, Yatras, Dharnas And War Of Words In Andhra

As pre-poll mudslinging heats up in AP, the ­YSRCP’s padayatra makes a mark 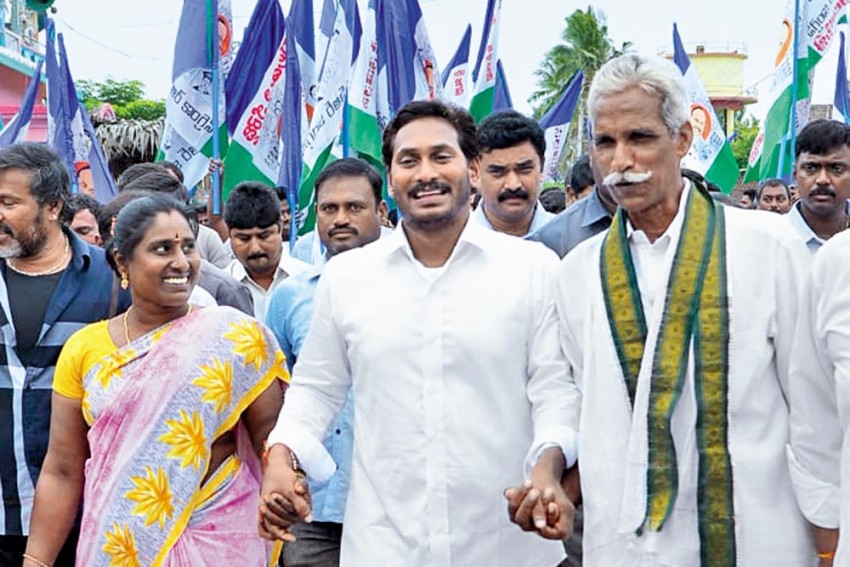 The election bugle in Andhra Pradesh has been sounded. The battle lines have been drawn. The verbal artillery is laying down direct fire all around, causing much amusement and leaving a bad taste in the mouth. Elections to the state ass­embly are tentatively scheduled to be held simultaneously with the general elections next year. And political parties in Andhra Pradesh have already gone into a pre-poll overdrive, with a bitter war of words ­currently in progress.

YSR Congress Party (YSRCP), leader Y.S. Jaganmohan Reddy—who draws huge crowds wherever he goes—is on a pad­ayatra across the state, and the party is holding agitations and dharnas over unf­ulfilled promises of the ruling Telugu Desam Party (TDP) government, the most important being a commitment to obtain special category status (SCS) for the state. Furthermore, the TDP had promised to waive farm loans amounting to Rs. 10,000 crore.

Realising that Andhra Pradesh did not meet the criteria for SCS, the BJP had promised to compensate its then ally, the TDP, with a Rs 30–40,000 crore financial package. But the YSRCP chose to attack the government with dharnas and padayatras, alleging that the TDP had settled for a ‘financial package’ rather than SCS in order to pocket the resulting funds. With the SCS issue being highlighted thus, TDP ­members began to worry as the demand gained currency among the people, with  parties like the Left joining the ‘chorus’.

Read Also: ‘The Congress Didn’t Respect My Dad After His Death’

With the YSRCP ­highlighting the special category status issue, TDP members worry it has gained currency among the people.

YSRCP leader Ambati Rambabu claims, “The TDP’s days are numbered.  The party leadership has realised the growing dissent among the people.  Farmers were deceived with the loan waiver promise.  Corruption reached  a pinnacle with the new capital building exercise.  Com­pensation was not paid to the people who surrendered their rich agricultural lands for the new capital.  People have understood how the central aid was misused and pocketed by the TDP chief and his coterie.” He even alleges that the TDP left the NDA coalition out of fear as the Centre had realised that funds allocated for ­development were being misused.

However, TDP leader Gorantla Buchaiah Choudhary dismisses the pad­ayatra as mere drama and claims that Jaganmohan Reddy was unable to face the assembly, referring to the YSRCP’s decision to boycott the last winter session. “Why did his party run away from the ass­embly?  Was it not true that their allegations had no substance?” He also justifies his party chief Chandrababu Naidu’s decision to pull out from the NDA alliance as the BJP-led government had gone back on its promises. “How can the new state capital be built with a mere Rs 1,500 crore? Or Rs 1,000 crore for drainage improvement,” wonders Choudhary.  He says the government had to spend Rs 2,600 crore alone for laying roads in the new capital, Amaravati. And the Centre’s promise to rel­ease funds under the special ­fin­ancial aid package? A farce, acc­ording to Choudhary.  “Yes, it was indeed a great betrayal by the Modi-led government, who Naidu believed would honour promises in letter and spirit,” he says.

But the Centre has countered the TDP’s allegations by stating that the state government had failed to satisfy it over judicious spending of funds that were ­already allocated to various schemes, including the new capital’s construction, the Polavaram irrigation project and others.

Even as Jagan’s padayatra ­enj­oys an overwhelming respo­nse, Naidu’s effort to force one of his MPs, Ch. Ramesh, to hold a ‘fast unto death’  agitation against the Centre—because it had backed out of a plan to set up a steel plant—failed to enthuse the people.  Naidu’s own MPs ridiculed their colleague’s fast as a farce meant to reduce his weight, and Naidu had to ask Ramesh to call it off.

Thus far, Naidu and his party seem to have given up the fight to hold counter-dharnas or padayatras against the YSRCP, and are now focusing on building a grand alliance of parties to oppose the BJP.  Sources close to Naidu confirm that his party would like to bury the hatchet with the Congress and join hands to counter the resurgence of the YSRCP in the state and the BJP at the Centre. On the flip side, political analysts claim that the YSRCP could reach a discreet understanding with the BJP to fight the next election.  In that backdrop, the question of whose ‘yatras’ or ‘dharnas’ will help them grab power in the state as well as the Centre is up in the air.