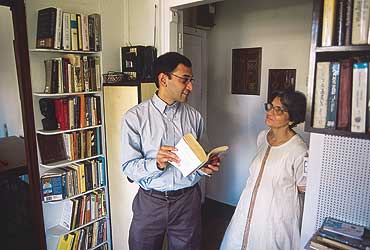 Mulmule and Hareendran are members of a small but growing tribe of people who've decided to give the snub to the boobtube. It takes immense effort though not to succumb to TV's seductive charms. Admits Delhi-based businessman and TV refusenik Ishmael Chawla, who finally dumped his set in his cupboard, "The moving image is so seductive, no amount of disciplining works."

What is it that has stopped these people from becoming couch potatoes? Are they merely contrarian oddballs or do they have lives far more interesting than the soaps on TV? Most of them simply find the idiot box a distraction or boring. "There's just too much emphasis on song and dance. It's irritating," says Calcutta's Sivadas Banerjee, a retired journalist who brought up his kids without television. Delhi-based art historian and writer Geeti Sen, who runs a TV-free household, finds the art of making conversation on the wane thanks to the idiot box.