Home  »  Magazine  »  National  » defence »  After The Guns Have Fallen Silent

After The Guns Have Fallen Silent

The CVC report on defence deals hasn't been tabled in the Parliament. Does it have bullets the government can't bite? Updates 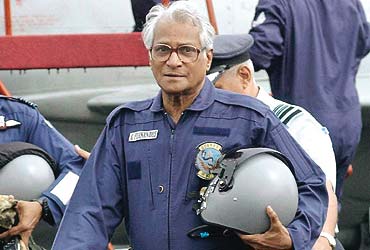 outlookindia.com
-0001-11-30T00:00:00+0553
Why did the bjp government go to such extraordinary lengths to avoid tabling the Central Vigilance Commission (CVC) report on defence deals in Parliament? It claimed "it would be prejudicial to the interest(s) of the state", in its explanation to the Public Accounts Committee (PAC). But the truth is that had the report been made public, it is the government that would have been severely embarrassed. Some of the findings in the report—which looked at defence deals signed between April 17, 1989, and December 31, 1999—would have been difficult to justify.

According to sources in the defence ministry, some key defence deals which the NDA government entered into in 1999—the year of the Kargil war—were 'questionable'. These deals relate to the induction of T-90 tanks and spares and ammunition for T-72 tanks. The CVC examined two other deals pertaining to Operation Vijay: the 1,000 Krasnapol Terminally Guided Munitions and procurement of various types of ammunition by the army headquarters worth over Rs 402 crore. These two deals with arms manufacturer RVZ Russia were signed in August '99 and December '99. The report, with its audited account of the deals, was submitted by the former CVC, N. Vittal, to the defence ministry on March 31, 2001.

In all, Vittal had examined 70 defence deals, each worth over Rs 75 crore, that had been signed and executed since April 17, 1989—the cutoff date when a policy decision was taken not to allow middlemen in any arms deal. Sources in the CVC and the defence ministry told Outlook that Vittal had pointed out several 'irregularities' in all these deals, including the ones entered into by the NDA government. He also pulled up the government for getting into a "single vendor situation", giving competitive bidding, which is the usual procedure followed in defence deals, a complete go-by.

Though the final deal for 310 T-90 tanks was signed in March '01, part of it was struck in May-June '99 after three tanks underwent peak summer trials in Rajasthan. It was followed up by further trials in October-November '99. The total purchase from Russia was worth $3 billion. "Based on these trials, army HQ prepared a general staff evaluation report recommending the induction of the T-90 tanks in December '99," says a ministry official. The price negotiation committee (PNC) headed by Lt Gen Shamsher S. Mehta, then deputy army chief, was responsible for selecting the tanks and giving his assessment report on field trials. Each tank was priced at $2 million (nearly Rs 10 crore).

While examining over 500 files relating to the defence deals, Vittal reportedly called for the dossier on the T-90 purchase when reports emanated of serious technical snags in the tank. Armoured corps personnel complained of the tanks having no "thermal imagers" and "night vision capability", getting "overheated" as well as failing to generate 1000 Horse Power (HP) as claimed by M/s RVZ Russia. The CVC's finding was that technical issues were ignored to serve 'vested interests'.

Right from the outset, the T-90 deal has generated a great deal of controversy. Former prime minister H.D. Deve Gowda and several other politicians alleged "foul play". Under the then existing proposal, 200 T-90 tanks were to have been bought from Russia and the rest to be manufactured locally. Till date, six armoured regiments have been equipped with the tanks. Subsequently, a French company has been awarded the contract for rectifying the night vision equipment in the tanks. 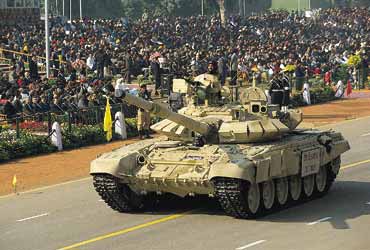 DEADLY DEALS: Technical issues were ignored in the case of T-90 tanks to serve 'vested interests'.

The other deal relates to 26,000 rounds of ammunition for T-72 tanks worth Rs 116.83 crore. This was approved by defence minister George Fernandes in June '99. The supplier was Israeli Military Industries. The spares, costing crores of rupees, have been either unsuitable or "spurious" and were procured at an inflated price, Vittal is reported to have observed.

Outlook has also learnt that Vittal picked holes in the procurement of the Krasnapol (laser-guided artillery) shells from kbp, a firm based in Tula, Russia. This purchase is exhaustively dealt with by the Comptroller and Auditor General's (CAG) audit report which slams the ministry on this emergency procurement during Operation Vijay. A conditional contract was signed in August '99 for the supply of 1,000 terminally guided munitions and 10 laser designators at approximately Rs 150 crore. "For some inexplicable reason, the price negotiation committee upped the price for the shells and designators from Rs 140 crore to Rs 149 crore," said an official in South Block. Coincidentally, Lt Gen Shamsher Mehta played a role in this purchase too, insisting on a 20 per cent advance to the Russian firm.

Despite the failure of the shells to meet the General Staff Qualitative Requirements during the tests and evaluation, the contract was cleared on grounds of operational urgency. In all, six trials were ordered to ensure its acceptance. No vendor has been ever given this concession. In other words, this was a case of pushing for a procurement which would not have otherwise passed the standard procedures.

The other purchases which come under scrutiny are two contracts signed with the same Russian firm, RVZ. The deal was worth Rs 402.76 crore. The guidelines prescribed by the Directorate General of Quality Assurance were overlooked and the shelf-life of four types of ammunition included in the contract had already expired at the time of finalising the contract.

The ammunition inventory consisted of 13.30 lakh rounds of 12.7 mm cartridges, 5,000 125 mm rounds, 36,000 B-429 fuses and 30,000 130 mm cartridges. On all these, the seller was to guarantee the quality and proper functioning of the ammunition for a period of 12 months from the date of arrival. Around this time, the government also concluded a contract with Denel Pty, a South African firm, for 7,300 rounds of illuminating ammunition for 155 mm guns. This contract was for Rs 52.47 crore.

One person privy to the CVC report was Justice K. Venkataswami, who headed the Tehelka probe. But the Opposition saw him as going soft and he put in his papers last year following an uproar in Parliament over his accepting another assignment from the NDA government. Venkataswami too had arrived at his conclusions about the findings on the deals. He told Outlook from Chennai: "I don't want to enter into another controversy over the CVC report." Venkataswami had completed his inquiry into 15 defence transactions at the time of his resignation, including the SU-30 aircraft, T-90 tanks and Krasnapol shells. The Opposition, predictably, is pointing an accusing finger at the government. Says Congress chief whip, Priyaranjan Das Munshi: "The government is reluctant to make public the report as its role and the involvement of kickbacks in the T-90, T-72 tank deals and the second part of the SU-30 fighter bomber aircraft will be exposed."

Ironically, the CVC report was the culmination of the investigation ordered by George Fernandes himself. And the defence minister may not have heard the last on the probe. The Opposition says it is determined to make defence deals an issue in the general elections next year.