After The Burial, At The Wake

‘India inured’. Who cares anymore for a hundred crore scam? 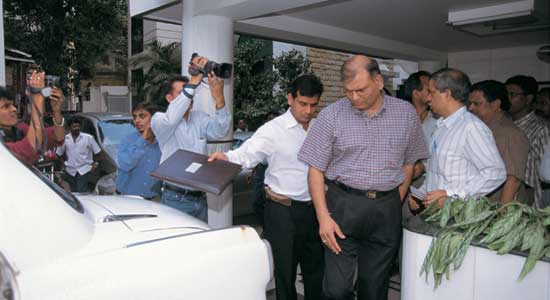 Puneet Paranjpe
Debarshi Dasgupta November 23, 2009 00:00 IST After The Burial, At The Wake

Had Madhu Koda been a chief minister even 25 years back and a Rs 4,000-crore mining scam had been exposed, the entire nation would have been outraged. There would have been rallies in the streets baying for his blood, Parliament would have been up in a storm. And for the guilty, the stigma would have been such they would never live it down. But we are in post-liberalised India now, and the Koda scam will hardly make it a week on the front pages. After all, what’s so novel about it, yet another politician and his chosen few cronies laughing all the way to the Swiss banks while he pillages the state’s precious natural resources on the side?  It seems as if the nation now lives from scam to scam, and is cynical enough to know that always the big fish will slip through the net. What made people sit up and take note in Koda’s case was the sheer scale at which he and his associates were raking in the moolah (investigators even found money-counting machines, the kind you see in banks, at his residence).

What India Could Do With Rs 73 Lakh Crore

So how well-entrenched and blatant is corruption in the system? Since 1991, when the Indian economy was opened up to make way for reforms—reforms that were aimed at unshackling the licence raj and reducing the scope for corruption—financial scams have ironically become the norm. This is what Professor Arun Kumar at Delhi’s Jawaharlal Nehru University refers to when he says, “The usual has become the unusual and the unusual the usual.” A conservative listing by Outlook of financial scams since 1991 has pegged the money looted at a mind-boggling Rs 73 lakh crore. What difference does a few thousand crore more make?

“The electoral system is at the apex of corruption. One can’t let go of the netas, for the tone is set by rulers.”
Adm R.H. Tahiliani, Transparency International India

But notwithstanding the bewildering scale and regularity to be seen presently, corruption in independent India had a relatively humble beginning. Almost the first to make an impact was the Jeep Scandal of 1948 when V.K. Krishna Menon, then India’s high commissioner to the UK, was accused of bypassing established procurement norms in an order for jeeps worth Rs 80 lakh for the Indian army. Menon was absolved but that did not prevent uproarious scenes in Parliament. Six decades later, it now seems that any attempt to raise a scam worth less than a crore among our legislators would be deemed a laughable waste of precious time. It’s only corruption running into several hundreds or thousands of crores that make the cut in a liberalised and reformed India. And that too only for a few days.

In some ways, it’s not surprising that scams before 1991 were few and far between. The biggest one was Bofors in 1985-86, which touched Rs 64 crore. It still haunts Indian politics even after Rs 250 crore has been spent trying to solve the case. Kumar, author of a book on corruption,  points out that between 1991-96, just after liberalisation, there were as many as 26 cases. Of these, 13 involved more than a thousand crore each. The number of zeroes have only kept increasing since, pushing scam amounts to astronomical sums. The spectrum allotment scam of ’08 is reportedly worth Rs 60,000 crore—that’s the kind of territory we routinely inhabit now.

“The Indian public looks thoroughly anaesthetised and numb, unable to express any concern at all.”
E.A.S Sarma, Ex-secy, Dept of Economic Affairs

Kumar believes the present size of the black economy in India is as high as 50 per cent (Rs 26,60,876.5 crore) of the country’s GDP. This figure, of course, is all-inclusive, and will count anybody who does not pay tax for an income earned, even the school teacher who does not declare his after-school tuitions. According to Kumar, in the ’50s this parallel economy was only five per cent of the GDP. Ironically, it is the urge to promote business and development at any cost that has bred this level of corruption. E.A.S. Sarma, former secretary of the department of economic affairs, says, “In the fast-track clearance paradigm, the government is prepared to look the other way when a developer violates established norms. And if any law comes in the way, it is prepared to rush and dilute them.” The capital markets post-liberalisation—often feted for the swinging highs they produce, almost as if it’s an index of the country’s economic health—are themselves flawed because adequate supervision, strict accountability and appropriate punishment are still missing, writes noted business journalist Sucheta Dalal.

The nexus between money and politics is also undergoing a shift with the former gaining the upper hand. Referring to the recent spate of money-tinged political scams—including those involving Madhu Koda, Union telecom minister A. Raja and the Reddy brothers of Bellary—Jayaprakash Narayan of the Lok Satta Party in AP points out that they “dramatically” demonstrate the next phase of this relationship. “It is no longer politics being just influenced by money. Today, it’s actually dictating terms,” he says. “There’s no wealth creation. The state’s natural resources are given away arbitrarily to private parties, the only consideration being the malafide intent of building private empires.”

The CPI’s A.B. Bardhan agrees: “The power of big money hovers like a dark cloud over our democracy. Crores are being spent on elections, even those to elect ward representatives. This keeps the poor and the parties of the poor from contesting elections successfully. Koda may have been caught but there are many big fish who have not been. For instance, it’s been reported that the average worth of the re-elected Haryana MLA has grown by Rs 5 crore. Even Jaganmohan Reddy’s assets are said to have jumped manifold. How do you explain it? This influence of money on democracy is eating into our moral fibre. We are in the midst of a moral crisis where very many people think corruption is now natural and normal.”

What’s worse is that the powers that be have little urge to act against this ongoing plunder. “Neither the politicians—and that includes the PM—nor the judiciary have the will to act against corruption,” says noted lawyer Shanti Bhushan. It may have been easy to act against Koda since he is out of power but what about A. Raja, whose party, the dmk, is a key component of the upa? Jayaprakash Narayan says if the government has any sense of genuine responsibility, it must act against Raja and cancel all the agreements executed under him. “The government’s survival may be challenged but at least it will send the message that we are not legitimising the private appropriation of the state’s resources on a monumental scale.”

While the poor are mute spectators to this plundering, the elite have in their own ways benefited from the network of corrupt politicians, business houses and the executive. Sarma also believes that politicians have “opiated the masses” with hugely expensive welfare schemes that run with little transparency and accountability. “The Indian public stands thoroughly anaesthetised, numb, unable to express any concern,” he adds.

The failure to act on corruption is almost systemic—with a few exceptions, politicians by and large have not been brought to book. Take a random episode, say the Jain hawala case—all 55 accused in the case were exonerated—which only goes to make people feel more and more convinced that corruption is de rigueur and that it will go unpunished. Since conscience today prevents only a few, a lack of fear of any action has made corruption all the more pervasive and, in a way, acceptable. “I still remember a time when people would not socialise with those who were suspected to have made money by dirty means,” recalls Arun Kumar. “But people today do not question anybody who has an unusually flashy lifestyle. There are many cricketers, filmstars who flaunt their black money but that doesn’t prevent them from being held up as idols.”

Even the judiciary hasn’t escaped the corruption taint—allegations of land-grabbing against the Karnataka High Court Chief Justice P.D. Dinakaran is a recent case in point. The possibility of action here was curtailed after the Veeraswami judgement in the early ’90s—it restrains criminal investigation of judges without the prior written permission of the Chief Justice of India. “Not a single permission has since been granted,” says Bhushan. Another check—the bureaucracy—had even earlier fallen prey to corruption and there are few insiders willing to speak out. One such voice is that of Vijay Shankar Pandey, a serving 1979-batch ias officer from UP, who was behind the unique poll that was held twice in 1996 and 1997 among the babu lobby to elect through secret ballot the top three corrupt officers from the state. “If somebody tells you that money for development is scarce, he or she is lying. The truth is that corruption has almost become a non-issue among bureaucrats and it has killed us all,” says Pandey.

Nonetheless, there are some who are not so sceptical. Transparency International India chairman retired admiral R.H. Tahiliani is one of them and he refers to the Supreme Court judgement in March 2003 that mandates all candidates to declare their assets while filing nominations. “Corruption is at its apex in the electoral system. One therefore can’t let go of the politicians, more so because the tone is set by the rulers,” he says. Narayan, on the other hand, offers an interesting analogy: water at 99 degree Celsius is hot but it has no energy. Add a degree, it starts boiling, develops steam and gains tremendous energy. “Just like that, those against corruption need to keep up the struggle. You never know when those few extra degrees may come. After all, the Berlin Wall still came down without a single shot being fired, didn’t it?” he asks.